On any given day throughout the school year, thousands of students bustle in and out of Notre Dame’s South and North Dining Halls. They roam around while holding large beige trays, passing by the spicy cucumber salad, the gluten-free quinoa, and the make-your-own pizza. They can eat as much or as little as they desire while inside the warm, towering walls of these halls. But the rules change as they make their way out the door.

Although there is an “all you can eat” mentality inside the dining halls, signs are posted on every wall that read, “When leaving you may carry out ONE of the following item with you: piece of fruit, pastry, dessert, yogurt, beverage.” Signs like these, with bold print and outdated word art pictures of cups and fruit, are not just ignored; they are challenged blatantly. Sure, there is a rule about how many “treats” can be taken out, but where is the sign with the rule about the trays with the ND logo or a stack of the clear plastic cups? 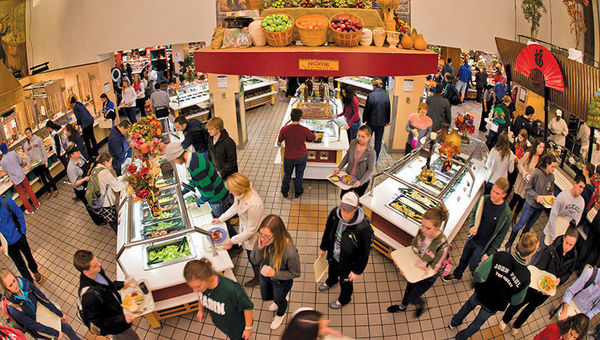 Notre Dame Food Services is engaged in an increasingly difficult and costly battle against theft of food and property from the dining halls. Ada Bradley, a Notre Dame employee from 1990 until her death in 2013, said that monitors patrol the dining halls to help prevent this loss of food and property. She said, “I have seen students try to steal anything from waffle irons to chairs to just lots of excess foods.”

Now that backpacks are allowed to be taken into the dining areas, students very casually take extra food out of the dining hall to be consumed later. Badin Hall actually wrote in its orientation handbook: “You can take your backpacks into both dining halls now (great for getting food past the monitors!).”

It seems that the posting of signs stating which five items are acceptable and the presence of monitors have only created an intriguing challenge for students.

Marc Poklinkowski, the general manager of South Dining Hall, thinks the extravagance of the items being taken has increased. He said, “Three students were starting to disassemble the frozen drink machine in the east dining room one day during lunch. They stopped and left when they [realized we] knew what they were up to.”

Though the problem of dining hall property theft is not unique to Notre Dame, the particular school pride and spirit at this University seem to play an important role. Poklinkowski said that items bearing the “ND” logo are far more popular for thieves than other items.

“We’ve eliminated ND waffle irons at South because of theft. The commercial grade waffle irons that were supplied by our waffle mix distributor cost about $500 each. After they lost a few, they wanted us to provide a solution to help from losing more. We started locking them down with padlocks and chains. Students cut the padlocks off to steal the irons, so we just stopped the ‘ND’ logo plates completely,” he said. “The same holds true with the dining hall trays. We lost 500 trays in just one year, so when it came time to replace the trays, we eliminated the logo.”

Even items not associated with food are not safe from students’ sticky fingers. “After the last football game, we had a podium that the monitors use up at the front desk stolen – probably because it had an ‘ND’ on it,” Poklinkowski said.

Bradley said some of the nicer decorations like ice sculptures have become a problem. The staff puts up fewer decorations for holidays or special events each year because “[the administration] could wind up losing them if they’re too attractive.”

Poklinkowski said the failure of theft prevention measures has caused Food Services to make changes to menu items as well. He said, “One of our most popular desserts in the past [was] mousse in wine glasses. We used to serve this at candlelight dinners by borrowing the glasses from our catering department. We kept returning fewer and fewer glasses to them after each game and eventually they didn’t have enough to supply both dining halls. It became so cost prohibitive that we just removed the item from our menus.”

A missing wine glass or two doesn’t sound like a financial fiasco, but over the course of a year the numbers add up. Poklinkowski said, “The replacement cost for our small wares is about $25,000 a year. That’s total replacement cost, and does not separate any breakage, general wear and tear, etc. I would estimate that theft is probably responsible for over half of that.”

Although there is an allotted budget for issues such as the cost of theft, students could begin to see effects on their own wallets. Presnell said, “Eventually the theft will probably affect meal plan costs. If it costs more to feed you, we’ll charge you for it.”

The replacement costs add up for students whose belongings are stolen, too. Poklinkowski said, “[Particularly] at the end of each semester students’ property [is stolen from] the bookshelves in the lobby; probably because the books can be sold back to the bookstore.”

There is also a cost involved in the punishment for students caught stealing by the monitors. Bradley said, “We remove their student ID, management puts it in the computer, and the student has to pay a fee to get it back.”

Students should be grateful that the punishment has changed over the past several decades. According to Notre Dame Archives, in 1940 the rule was “for unbecoming conduct in the University dining hall, for taking silverware or other articles therefrom, the penalty for the first offense is suspension, and for the second offense, dismissal.”

The members of Food Services were quick to point out that only a small group of the Notre Dame students participate in this theft. Poklinkowski said, “When you have over 6,000 students on meal plans, there will be a few that will look to take advantage of the freedom that we supply in the dining halls.”

Presnell maintains, “99 percent of [the students] are good. If they weren’t mostly good, I wouldn’t work here.”

Kathleen Ashcraft is a junior at the University of Notre Dame.