Indiana’s Westville Correctional Facility, a repurposed mental institution, looks as though time stopped in the mid-1950s. Where the walls are not bare, they are adorned with sexual-assault reporting protocols, rules framed neatly and affixed to the cinderblock, and the occasional random poster from about 1982. I wonder what a bleak space like this does to the souls of the people confined here day after day. 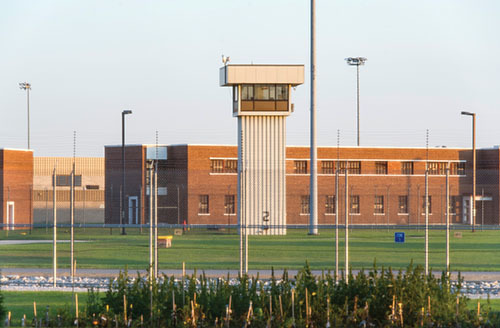 The halls of the prison buildings smell of antiseptic cleaning supplies used daily by young men whose job it is to mop over and over again, even when nothing needs mopping. Chipping paint, plastic-wrapped broken windows and varying degrees of disrepair are everywhere. The constant clicking of security gates and the incessant walkie-talkie communication are forever drilled into my memory. Omnipresent lines of men come and go from one space to another, the green and orange sock caps on their heads providing the only color against the wintry gray background.

Largely unused basketball hoops, outside pay phones and dusty courtyards with high fences and barbed wire remind me that the lives of those incarcerated here are not their own. The never-changing daily lunch menu makes me think that when they leave this place, if they ever do, the men will never again eat a peanut butter and jelly sandwich.

Although it is called a “correctional facility,” rehabilitation here seems to be an afterthought — perhaps out of necessity. The well-meaning prison employees I encountered had such specific job descriptions, working, for example, as gate guards or unit supervisors, that bringing change to the system was clearly outside the scope of their day-to-day responsibilities.

When I agreed to teach in the Westville Education Initiative, which began in 2013 when Notre Dame and Holy Cross College joined Bard College’s Consortium for the Liberal Arts in Prison, I admit that I was scared. Scared I didn’t have enough command of a classroom to absorb individuals whom I presumed to be tough and difficult to reach. Scared to engage with people I perceived as vulnerable and needy. Scared about how gender would play out in the classroom.

One of the administrators of the program gently admonished me at the start of the semester: “Remember your job is to teach your class and teach it well. It’s not to change the prison system nor is it to save anyone.” It was sage advice, but I couldn’t help but wonder about my larger responsibility to challenge issues related to our criminal justice system and mass incarceration.

After the security clearance, mandatory self-defense training and the “shakedown” process to enter the prison, I anticipated that my first class session would be something more than merely meeting a new group of students. I was encountering incarcerated men. The system didn’t let me forget that. The process seemed designed, in fact, to be a constant reminder.

Then I met my students. On the very first day, in an assignment prepared ahead of time, members of the small group were to deliver to the class, from memory, a piece of a famous sermon by Martin Luther King Jr., in the cadence and style of a Baptist preacher. I should mention that I’m a white woman who works in the Department of Africana Studies and the Institute of Educational Initiatives at Notre Dame, in this case teaching men of all ages and ethnic and racial backgrounds about the different ways people of color have been, and continue to be, marginalized in the U.S. educational system. It’s a loaded course with controversial material, demanding a certain level of trust to engage in fully.

I walked in, introduced myself to the students, called them all by their last names, as prison protocol suggested I do, and began class. I was reminded by a nagging voice some of us would think of as our conscience to be impressed with the fact that, despite these students having just met me and having no reason at all to trust me yet, almost everyone was prepared to do what I asked. There was a quiver in some of their voices as they began, and vocal skepticism as I made them climb on top of a chair to deliver their address, but they did it.

It reminded me that I had an obligation to treat these students the same way I do any others I teach. I could no longer look at these men as “students who are also incarcerated,” nor was it my job to proselytize about second chances or the “opportunity” this represented for them. For the sake of all of us, they needed to be just students. I know now that this was the least I could offer them, given the trust they displayed in me that first day.

Over the next few weeks we read all different types of literature and research, including the work of Anna J. Cooper and W.E.B Du Bois, trying to unpack what it means to learn, to know something deeply while drawing on lived experiences. We learned together about African American, Mexican American, Asian American and indigenous peoples who bravely challenged inequities in education throughout U.S. history. Along the way, we used writing, diagrams, note-taking, discussions, debates and drawings to tease out our ideas. I was no longer “just” the instructor and they were no longer “just” the students. The students and I became a “we.”

At some point, I started using their first names, and I was reminded of the writer Linda Christensen’s article, “To Say the Name Is to Begin the Story.”

From then on, we were engaged in the time-honored tradition of using every available piece of knowledge and experience to make sense of ideas. And the class became personal, because real learning is always personal. The students worked to reflect on and make sense of their own educational background. They learned to trust that even though their experiences were different from someone else’s in the class, they were equally valid. We came to appreciate that there are multiple ways to experience the same thing and multiple meanings of important ideas.

My work within the prison walls of Westville is a reminder of the magical opportunity of teaching. Beautiful learning comes in lots of shapes, forms and spaces. It comes in the chiseled face of the tattooed young man eager to explain his upbringing to his classmates. It comes in the slouched weariness of an understandably cynical student who gradually comes to life over the course of the semester as he realizes his ideas matter to the conversation. It comes in the gentle, uncertain voice that asks, “Do you know what I mean?” after everything he adds to the conversation. It comes in testimonies of educational plans gone awry and graduation speeches that give us a glimpse of a student’s former life. It comes in the bravery of the student who speaks up for the first time in the last few weeks of class. And it comes in the impassioned plea of one student to the others to take their education seriously.

In the end, the students I had the honor of encountering at Westville taught me that even with the gray cast to the buildings, the clanging of the locks and the suffocating antiseptic smell, human dignity can endure in even in the bleakest circumstances, and that we have a collective obligation to support all children, families and communities in meaningful and caring ways.

Maria McKenna is a Notre Dame associate professor of the practice for the Institute of Educational Initiatives and the Department of Africana Studies. Her research focuses on educational care and youth and marginalized voices in the schooling process.