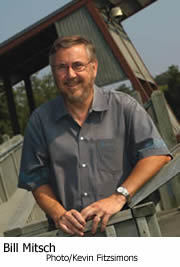 Bill Mitsch ‘69, a professor of natural resources and environmental science at Ohio State University, hit a political nerve when he spoke up about how heavy human hands on the Mississippi River had exacerbated the problems in New Orleans.

“It makes no sense to spend any money rebuilding the city without addressing the long-overdue issue of restoring the natural features that once protected New Orleans from storms,” Mitsch told the Columbus Dispatch. He called the extent of the damage to the river and related wetlands “criminal.”

Swamps, bogs, marshes, fens, quagmires—whatever you call them, Mitsch says wetlands are the salvation of the world. We need more of these engines of ecological integrity, and he knows how to build them. "They’ve really got to let that river go, left and right," he says. “We get in trouble when we’re arrogant enough to think that we are in total control.”

As a young man with a degree in mechanical engineering, Mitsch was fascinated with power plants and thermodynamics. He wound up at Commonwealth Edison, which lights up Chicagoland. He eagerly watched the environmental movement take root in the political ferment of the day then realized uncomfortably that he was working for a major polluter. After a stint in the company’s new office of environmental affairs, he left for graduate school at the University of Florida.

Among his mentors at Florida was H.T. Odum, one of the premier ecologists of the last century. A big thinker and master showman, Odum would astonish companions when, donned in street clothes, he would stride into the water without interrupting his conversation.

Odum needed a graduate student for a unique experiment: What happens when you pumped processed sewage into a parched cypress swamp? Could the water revive the swamp, and would the swamp then finish cleaning the water? While scouting the experimental site, Odum tapped Mitsch for his fellowship of mud. “It was mucky and muddy and messy,” recalls Mitsch. “[Odum’s] just having a ball, and he turns to me and says ‘You want to do this stuff?’ And I said ‘Hell yes.’”

In the South, Mitsch says, “You see how powerful ecology is.” When the experiment worked, the possibilities set his mind ablaze. “It all clicked: all the cylinders of my life, from understanding thermodynamics to learning about ecology,” he says.

Since Europeans had arrived in North America, wetlands had been seen as wastelands: something to drain, fill, cultivate or excavate. From 1780 to 1980 the lower 48 lost on average an acre of wetland every minute. But wetlands also were emerging as a flash-point where ecology and economics collided. Scientists argued that wetlands provided real economic benefits: They filter pollutants from water, buffer us from floods, and nurture a bounty of fish and wildlife.

Wetland policy became one of the most contested arenas of environmental policy. Businesses and communities often found themselves regulatory hostages to an inconveniently located stretch of damp ground. One possible solution was creating or restoring wetlands to compensate for those destroyed through development. But debate raged: Are wetlands created by people as good as natural wetlands?

Answering this question has been Mitsch’s passion. At Ohio State, under-used fields near the Olentangy River were secured. Restoring old wetlands is usually easier than cutting them from whole cloth, but these had never been wetlands. Mitsch appreciates the exquisite and complex beauty of natural wetlands tended by Mother Nature over eons but argues that wetland function is mostly a matter of plumbing. “If you get the hydrology right, you can have wetlands on the moon.”

He and his students designed two kidney-shaped catchments, and in 1994 they were filled with water siphoned from the Olentangy. One basin was planted with a half-dozen local wetland species; the other was allowed to follow nature’s course. Within three years the two had converged and were nearly identical in terms of plant species and water filtration. Such ecological benefits as water purification and nutrient sequestration are similar in both wetlands.

Because we can create a wetland, says Mitsch, “We need to do stuff on a much bigger scale if we really expect wetlands to make a difference.” Among his more radical proposals is to tackle the dead zone in the Gulf of Mexico with a minimum of 24 million acres of new and restored wetlands in the Mississippi River basin.

He has some practice with wetland work on a big scale. In Iraq, Saddam Hussein attempted to strangle resistance by draining massive wetlands in the south; Mitsch has twice traveled to the region to teach restoration techniques.

Using natural systems on this grand stage is an emerging field called ecological engineering, and Mitsch, with Danish colleague Sven Erik Jorgensen, wrote a pioneering text. In 2004 their collective works netted the authors the coveted Stockholm Water Prize, which comes with a $150,000 cash award. “The 21st century will be the century of repairing the planet,” says Mitsch. “There needs to be a profession that knows how to do it right.”

Erik Ness writes about science and the environment from his home in Madison, Wisconsin.