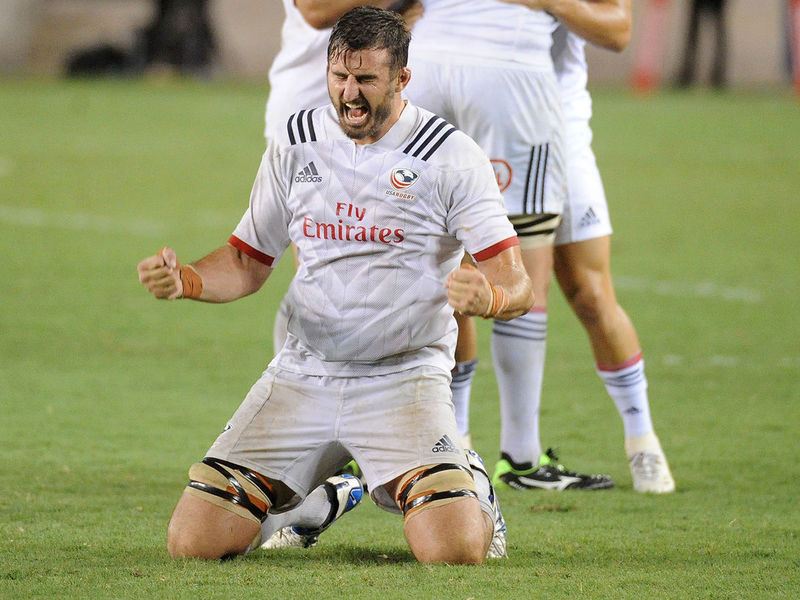 Breathe in, breathe out. Shake out the arms and legs. Channel the nerves into the pure, tensile focus required to perform on the world’s biggest stage.

Nick Civetta ’11 stands with his teammates in the tunnel under the stadium in Kobe, Japan, on September 28, the day of his Rugby World Cup debut for the USA Eagles. This is exactly where he wants to be, facing an immense challenge against England, the third-ranked team in the world, the country that invented the sport almost 200 years ago.

He tests his ankle gingerly, hoping the intense rehab and tape job will support the joint he dislocated two months earlier. The injury doesn’t matter. He was chosen to start this game because he is the best in the country at his position, a “lock,” one of the tallest, strongest men on the team at 6-foot-8, 255 pounds, whose job is to drive the scrum forward and quarterback one of the most important special plays in rugby, the lineout.

The drums begin pounding, a distinctly Japanese introduction that brings the crowd to a fever pitch. With a deep breath, Civetta runs onto the field in his No. 5 USA Rugby jersey, oblivious to the noise, focused only on the task at hand.

I sit in a coffee shop with Nick the day before the game, talking with him about journeys. Nick insisted on buying the coffee because, he says, it’s the least he could do for a friend who crossed the world to watch him play. Friendship permeates Nick’s rugby story.

“I started playing my freshman year at Notre Dame because I wanted to make new friends,” he says. “I had played football in high school and then for Knott Hall, but I was looking for a new group of guys and it looked like the rugby guys were having fun.”

Rugby turned out to be as enjoyable as it looked — especially for a player of Nick’s size, who realized he would be more involved in the action than he could on the football field. He made an instant impression as a natural athlete and a quick learner.

“From the first moment, I loved it. Having come from football, the ability to carry the ball, to tackle, to pass and to do all of the things they wouldn’t let me do . . . and two weeks in, head coach Sean O’Leary said to me, ‘Nick, if you keep doing this, you could be an Eagle’” — that is, a member of the United States men’s national team. “I kind of had to laugh it off but in the back of my mind I thought, ‘That sounds like something I want to do.’”

My husband, Mac, and I joined the Notre Dame men’s rugby program as coaches when Nick was a junior, just back from semester abroad in Australia, where he was able to hone his skills. As someone who did not grow up playing the game, as most elite players around the world do, he had a lot of catching up to do to excel in international rugby, but he had a hunger to go further.

His college rugby career finished with a wake-up call. Nick was a star during his junior and senior years. He was named an All-American and, at the “boot camp” that precedes the college all-star games, he learned some hard truths about fitness and commitment.

“I had skated by on my natural rugby ability up to that point, but there was a moment when I was barreled over in a drill by this guy from Texas, and as I lay on the ground, I thought, ‘Crap, I can’t hit nearly that hard. I’ve got some work to do.’ His name is Chris Parker, and I still talk to him.”

Every person in Nick’s story is still present, a part of who he is today.

Rugby became central to Nick’s life, even without a professional league in the United States. As he pursued a master’s degree in civil engineering at Cal Berkeley, he joined a club team. When he returned to his home state of New York to work, he joined another.  He knew he had to go abroad to take his game to the next level. A teammate in New York who had played professionally in Italy offered to help.

“Six months later, he called me, and said, ‘Nick, I got you a contract.’ The next day I put in my notice at my job, and I jumped overseas,” he says. “That was 2013. It was another step in a long, weird journey.”

A U.S. rugby commentator recently called Nick “a journeyman player,” a label he accepts without offense. “He’s not wrong. I played for eight, nine teams in nine years.”

That included three teams in Italy before he moved to England to play for Newcastle in 2016 and then got the call to join the Eagles. He made his USA Rugby debut against the New Zealand Maoris in Chicago that November.

“For that to be my first game out was really special, it’s rare that we get to play in front of 30,000 people in the U.S., and all of my Notre Dame friends and family were there,” Nick says. “I was nervous the week before, but once I was on the field . . . I was comfortable.”

The next year, he scored his first try, the rugby equivalent of a touchdown, against top-ranked Ireland. It was his job to charge down an Ireland kick. He scooped up the ball and stormed over the line.

“If you see the tape,” Nick says, “there’s me standing over the ball, looking kind of confused.”

The Ireland try wasn’t Nick’s favorite moment playing for the Eagles. That came in 2018, when the USA Rugby beat Scotland, considered one of the biggest upsets in the sport’s history, comparable to Appalachian State’s stunning 2007 win over Michigan in college football.

An iconic photo taken just after the Eagles one-point victory shows an elated Nick on his knees, celebrating the moment that convinced the team “that we could compete against anyone in the world.”

The same commentator who called Nick a “journeyman” also noted that the Eagles have the most successful lineout in the world, and this is all down to Nick, whose job is to orchestrate this technical play. Lining up against seven players from the other team, a lightning decision has to be made which two guys are going to pick up a third and launch him into the air to catch the ball being thrown into play. It’s a fantastic spectacle that Nick runs better than most players in the world.

That’s only one reason he was selected to start against England in the World Cup despite suffering a total dislocation of his ankle in a warm-up game against Canada in July. He admitted that he thought his shot at playing in the tournament was over. “It was a freak accident and I thought, ‘Whelp, see you in six months.’ But I made it back. It’s like my whole career, just doing the grind.”

I sit in the stands in Kobe, heart pounding, as the kickoff whistle blows.

Within minutes, Nick makes multiple bone-crushing tackles, finds himself at the center of a “maul” — preventing England from driving the ball forward in a mass of moving bodies — and successfully executes a critical lineout, allowing the U.S. to maintain possession on England’s side of the field. I exhale, and stop worrying about his ankle.

His work rate is phenomenal. He plays without nerves, and seemingly without pain in the 45-7 defeat. Before the game, he told me about an opposing player he wanted to tackle, an objective that I watch him achieve. Twice, in fact.

Despite losing, Nick makes a huge impression on the English rugby press, who call his performance “heroic.”

The Eagles followed the England loss with a 33-9 defeat against France, though they kept the French team within three points, 12-9, until fatigue took over 65 minutes into the 80-minute match. Nick rested his ankle during Wednesday’s 47-17 loss to Argentina, but he’ll be back in the lineup for the team’s final World Cup game Sunday against Tonga.

Knowing they had drawn “the pool of death,” the Eagles welcomed the challenge of playing some of the world’s best teams. That’s the essence of Nick’s approach to the game too — the determination to test himself against top competition. The odds don’t matter.

He had been contemplating retiring after the World Cup, but the possibility of prolonging his career still holds some appeal. “Let’s see where this leads,” Nick says, characteristically treating his ascent to rugby’s global pinnacle not as the culmination of his journey, but as just another step.

Cat Bolten is an associate professor of anthropology and peace studies. She spent eight years as an assistant coach in Notre Dame’s rugby program.