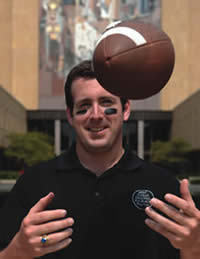 Brian Farkas ‘03 received a tryout with the Notre Dame football program this summer, and it didn’t even cost him a day of his unused NCAA eligibility. The 6-foot, 200-lb. former lineman for Detroit’s Catholic Central high school even made a little money on the deal.

No need to worry about NCAA rules violations for the Fighting Irish or head coach Charlie Weis. In fact, Farkas is all about tradition and integrity in athletics. With a little help from friends at his alma mater, he may even change the face of Notre Dame football.

These days the political science major, now a third-year student at Ave Maria School of Law, is also the lead principal of Farkas Original Eye Black, LLC. The rookie company has rethought the glare-cutting marks that outdoor athletes have smeared under their eyes for generations, giving them old-school flair in packaging and performance.

Better yet, Farkas has a story to tell that may just punch a hole through a crowded product field like a Washington Redskins fullback.

Tradition and the best available research hold that his grandfather, Andy Farkas, introduced eye black to the National Football League as a backfield star for the world champion Redskins in 1942. The younger Farkas knew nothing about this until a friend forwarded a 2006 article on ESPN.com that mentioned his grandfather’s dark and durable contribution to sport.

“That was just the simple way he lived his life. It wasn’t about him. It was about using your God-given abilities to be the best,” says Farkas, who hopes his product will introduce his grandfather—the man and his life ethic—to today’s athletes.

Had he been the sort, “Anvil Andy” would’ve had plenty to brag about. Already an athletic hero in his native Toledo and in Detroit, where he’d played football in high school and earned All-American honors in college, Andy Farkas was the first NFL player to catch a pass for an official 99-yard touchdown. Several players have tied the record, but league rules for measuring reception yardage assure it will never be broken. He twice led the ’Skins in rushing and scoring and was the top NFL scorer in 1939.

Simply put, Andy Farkas was a two-way, old-school football standout who blocked, tackled and caught dangerous over-the-middle passes without a helmet in a time when players still had a choice. A year after his death, in 2002, the Washington club honored him as one of the 70 Greatest Redskins.

That was nothing compared to his reputation off the field. Decades after Andy retired, old teammates would pull his grandchildren aside at banquets to tell them how their grandfather had taken them to daily Mass. One man told Brian’s father, Mickey Farkas, how as a child he’d waited outside D.C.‘s Griffith Stadium after the 1942 championship game to ask his hero, who’d scored a touchdown to seal the Redskins’ 14-6 victory over the Chicago Bears, for an autograph he could take to his sick grandmother. Farkas gladly gave the autograph, then drove the kid to his home in a poor neighborhood and spent hours visiting.

These, too, were things Andy Farkas’ family hadn’t known about.

Knee injuries cut short the elder Farkas’ football career before he turned 30, leaving him to focus for the next 55 years until his death in 2001 on the things he cared about most: his Catholic faith, his wife, Ellen, and their growing family. He opened a sporting goods business in D.C. and later moved the family back to Michigan.

As for the eye black, the leading theory is that he burned some cork and rubbed it under his eyes for a pre-game photo shoot in American Indian regalia. It was war paint, the theory goes, and it stuck in more ways than one.

While shoe polish and burnt cork became sentimental favorites for thousands of youthful neighborhood sandlot warriors, a whole eye black industry emerged to supply the increasingly commercialized world of amateur and professional sports. Any game that involved intimidating one’s opponent while catching a ball in open sunlight called for eye black, often packaged in what amounted to a fat, plastic lipstick applicator. Companies seeking an edge eventually marketed adhesive patches and claimed for them the same sun-blocking benefits. At first these, too, came in basic black, but a flashier generation of collegiate innovators has turned the stickers into personal billboards displaying everything from a school’s colors and logo to a player’s home area code.

Brian Farkas answered the trend with the voice of his grandfather, the two-time Pro Bowler who told his six kids to “go for the gusto” every morning as they left for school. He found a Yale University study that affirmed grease manufacturers’ claims that their products reduced glare and improved the eye’s sensitivity to contrast, and that patches did not.

He trademarked his grandfather’s name and began to seek advice. Ave Maria law professor Stephen Safranek ’88J.D., ’88M.A. suggested packaging the new black in a tin. Another mentor advised him to add “Original” to the company name.

Friends from his state champion high school football team encouraged him. This, they agreed, would be the kind of stuff serious athletes would want to buy. And at a family business meeting—for the company was becoming at least partly a family affair—Farkas’ 9-year-old nephew, Joe, suggested stamping Grandpa Farkas’ signature, lifted from one of the thousands of football cards he’d autographed for free, onto the unique silver tin.

All eye blacks are essentially some goopy combination of substances like lanolin-petrolatum, black oxide, beeswax, borax, emulsifier wax and carnauba wax. Farkas took a stick off the shelf and sought help from a private label manufacturing firm to “make it blacker, make it stay on longer and make it come off easier.”

After the firm tested the fifth or sixth formula on Detroit-area high school lacrosse and baseball teams playing in 95-degree spring heat, Farkas decided the time had come to approach local mom-and-pop sports shops. He visited 10 stores in two weeks and told his grandfather’s story. Not one turned him down. He then contacted Chad Klunder, Notre Dame’s director of football operations, who bought a case of 25 tins and agreed to let the players try it out during summer workouts and the first few games, no promises.

Soon two Detroit shops had re-ordered, and Farkas had deployed a legion of former Fighting Irish football players to shop Farkas Original to old teammates now playing in the NFL. His college friend, Bailey Siegfried ‘03, grandson of the late Notre Dame trustee Raymond Siegfried, secured an agreement to make it the “Official Eye Black of the Siegfried Hall Ramblers,” the 2008 winners of the Interhall Sports Trophy. Meanwhile his retail outlet list had extended to the gift shop at South Bend’s College Football Hall of Fame.

His product may take longer to apply than the grease sticks and patches, but to Brian Farkas, that’s a selling point.

“One of the big themes of our company is that my grandpa took time in his life to prepare, whether it was business or going to Mass . . . or preparing for a football game,” he says. “He would take that five minutes before a game in the locker room and just get himself psyched up.”

Farkas hopes another advantage of the tin—the black space inside the lid where he could custom-print slogans like “Play Like a Champion” or “National Championship”—becomes a selling point, too.

That way, “your athletes are looking at it five minutes before they go on the field. They know what they’re playing for,” Farkas says, holding up a picture of a young Andy playing with his children on the living room floor. “Whether it’s in sports or in life, know what your goals are.”

John Nagy is an associate editor of the magazine.