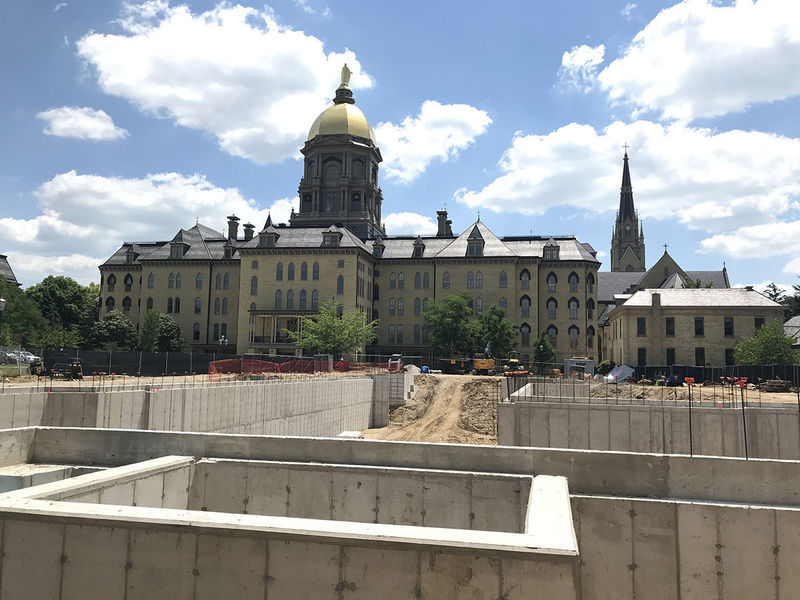 On the mostly quiet Notre Dame campus this summer amid the coronavirus shutdown, the sounds of construction are still heard.

Some campus building and renovation projects are proceeding as scheduled, while others — including the future Raclin Murphy Museum of Art — have been postponed because of the pandemic and related financial uncertainty.

The new Corby Hall, a replacement of the traditional residence for Holy Cross priests and brothers, was finished in early July. The original Corby Hall, built in 1895, was demolished in 2018 and its replacement is a modern building with a similar exterior style.

Work on an expansion of Rohr’s restaurant in the Morris Inn is done. The restaurant will reopen for sit-down dining July 27. The Morris Inn is closed indefinitely to guests, but Rohr’s has been offering a limited menu for grab and go and curbside pickup. Rohr’s, a casual dining restaurant, was expanded to fill the space that formerly housed Sorin’s restaurant, which closed in fall 2019.

Across Notre Dame Avenue from the Morris Inn, the beams are in place and work is progressing on the four-story replacement for McKenna Hall. The original McKenna, built in 1966 and originally known as the Center for Continuing Education, was demolished.

In addition to serving as a conference center, new McKenna will be home to the Enrollment Division (including the undergraduate admissions office, financial aid, student accounts and other units), which will move from the Main Building. The building is expected to be finished by fall 2021. See a live cam view of progress on McKenna here.

Work on Remick Family Hall, being built on the site of the demolished Brownson Hall, is continuing, with the foundation now in place. The building is expected to be completed in winter 2021, according to Doug Marsh ’82, vice president for facilities design and operations and university architect. It will provide additional space for Notre Dame’s Institute for Educational Initiatives and for the Alliance for Catholic Education (ACE), which is part of the institute.

Johnson Family Hall, a new four-story women’s residence hall, was completed this summer on East Quad. The first residents are scheduled to move in for the start of classes in early August.

A major renovation of Dillon Hall, a men’s residence hall, is complete. Residents are scheduled to move in in early August. Renovations on other residence halls that had been planned for 2020-2021 have been postponed.

Work continues on a hydroelectric generation facility on the St. Joseph River dam in downtown South Bend. The project, a partnership between the University and the city of South Bend, is slated to finish by fall 2021. The facility is expected to produce 7 percent of the University’s electrical needs and Notre Dame plans to lease the facility for 50 years. See a live cam view of the project site here.

The new home of the University’s Robinson Community Learning Center was completed in the spring. It’s part of Phase II of Eddy Street Commons, the mixed-use development south of campus. The move took place in June. The facility has limited its offerings to virtual programming in recent months because of COVID-19.

Construction had been scheduled to begin in the spring on the $66 million, 70,000-square-foot Raclin Murphy Museum of Art near the south edge of campus. Groundbreaking has now been postponed until at least spring 2021.

A private company is finishing construction on The Landings at Notre Dame, a new apartment complex for married and parenting students and their families. It’s on campus property north of Douglas Road and east of Indiana 933, near the site of the former University Village married student housing complex that was demolished in 2018.

The new complex has 192 apartments: 172 two-bedroom, along with 10 one-bedroom and 10 three-bedroom, says Dixie Lanier, marketing director for the higher education division of Rhode Island-based Corvias, the company with a contract to build and operate the housing for 40 years. Unit prices are based on size: starting at $825 for 1-bedroom, $875 for 2-bedroom and $1,075 for three bedroom.

Leasing is underway and the first tenants will move in in early August.