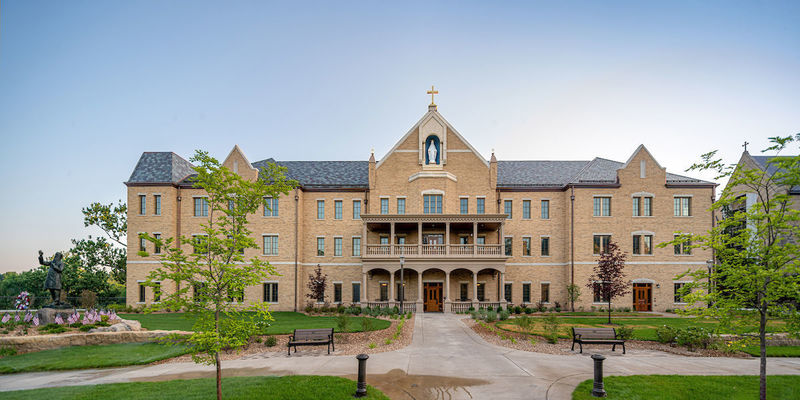 The new Corby Hall bears a striking resemblace to the original. Photography by Matt Cashore ’94

The rocking chairs have returned to the front porch and Father Corby is back near his traditional spot on the front lawn.

Without looking closely, casual passersby might mistake the new Corby Hall for the one that formerly stood on the same site. The rebuilt brick building’s façade looks much like the original.

The two-year construction of the new Corby Hall, a traditional residence on campus for Congregation of Holy Cross priests and brothers, is among recently completed campus construction projects. The residents moved in July 6 and 7.

A walk through the front door reveals wide corridors stretching both east and west, with lots of natural light flowing through large windows. Holy Spirit Chapel — with stained glass windows of Blessed Basil Moreau, founder of the Congregation of Holy Cross, and St. André Bessette, CSC — is straight ahead.

The new hall, with central air conditioning, includes 26 suites for permanent residents and six guest rooms. About 20 residents are living there initially. Each suite includes a small bedroom, a sitting room with a flat-screen TV and a bathroom with shower.

Some of the suites and guest rooms are handicapped accessible, which wasn’t possible in the old Corby, says Rev. Austin Collins, CSC, ’77, religious superior of the Corby Hall Community.  There also are two elevators. “We want people to be able to age in place,” Collins says.

“We never had enough room before,” says Rev. Nicholas Ayo, CSC, ’56, ’62M.A., a professor emeritus in the Program of Liberal Studies. He lived in old Corby for about 10 years before it was demolished, and lived temporarily at Our Lady of Fatima House during the reconstruction.

Ayo’s new bedroom and adjacent sitting room are at the northeast corner of the building, with views toward the Grotto and St. Mary’s Lake. He’s pleased with the new facility. He recalls the old hall, which had small rooms, window air-conditioning units and load-bearing brick walls that didn’t allow for much renovation. “Old Corby was livable. But this is like a four-star hotel — or three-star, at least,” he says.

“It’s very comfortable,” says Brother Patrick J. Lynch, CSC, an assistant superior of the Corby Hall Community, who has settled into his new room with a view of the south lawn. His old room at Corby was “quite a bit smaller,” he says.

“The chapel is beautiful,” Lynch says. And the new laundry room where the residents wash their own clothes has new washers and dryers, he adds.

The new Corby includes a formal dining room, informal breakfast/lunch room and a library. There is a common room on each floor and various parlors for small or large gatherings. The large living room, featuring a fireplace, is adjacent to a screened-in porch with an expansive view of St. Mary’s Lake and the landmark sycamore tree.

On the ground floor, the decor along one corridor includes two 19th century safe doors affixed to the wall, with the original name still visible in ornate lettering: “Diebold Safe & Lock Co. Canton, O.” The doors came from safes once used in the nearby Presbytery building, Collins says.

The statue of the Rev. William Corby, a Holy Cross priest who served as a military chaplain during the Civil War and twice as Notre Dame president, was moved in May back to a spot in front of Corby Hall. The statue had been moved to a temporary location to keep it safe during the demolition and replacement of the hall.

Father Corby now stands in a landscaped portion of the broad front lawn. One can’t tell by looking at it, but beneath the statute and the grass is a new 30-space underground parking garage. The garage allows Corby residents to sign out vehicles to use and return, providing access directly into the hall without having to step outdoors in inclement weather.

The original Corby Hall, built in 1895, was home to several major figures in University history. The Rev. Theodore M. Hesburgh, Notre Dame’s president for 35 years, lived in Corby Hall for more than 50 years. And famed Notre Dame football coach Knute Rockne, a 1914 graduate, lived in Corby for three years while he was a student.

The new building was made possible by a gift from an alumni couple, Jay and Mary Flaherty of Los Angeles, both 1979 graduates. Mary Flaherty is a niece of the late Hesburgh.