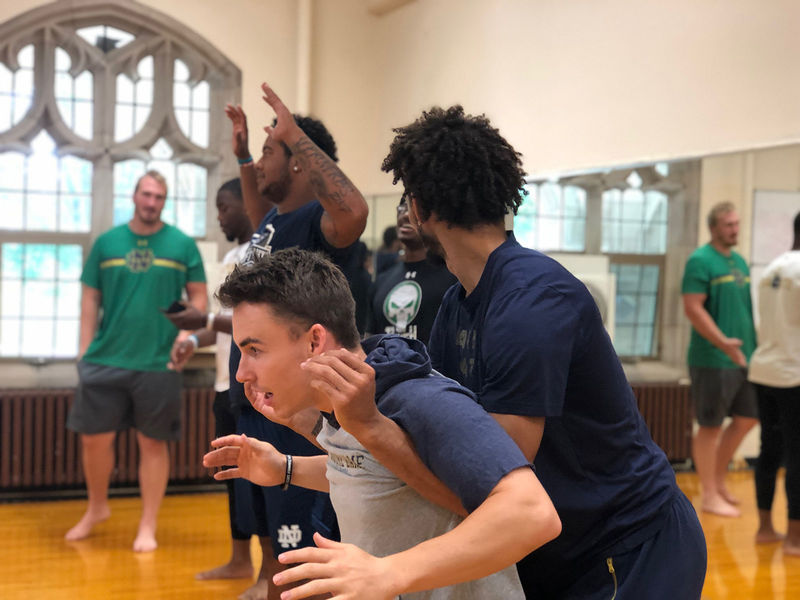 Bare feet slapped on the hardwood floor and students watched their reflections in the mirrored walls as Lindsay McCray ’20 commanded the attention of Rockne Memorial Gymnasium’s Room 109.

Fitted in a spotless white suit, black belt tied tight around her waist, McCray was there in her role as president of the Notre Dame Mixed Martial Arts Club. The students before her were there on a field trip. Their class? Martial Arts and Popular Culture.

Dr. Eric Haanstad, an assistant professor of the practice (and director of undergraduate studies) in the anthropology department, has taught this six-week summer course three times in the past four years, and a semester-long version twice. A martial arts class cross-listed with the film and Asian studies departments may not seem an obvious fit for an anthropologist, but Haanstad has deep connections to this field: He began participating in martial arts at the age of 15 and today serves as a coach for the Notre Dame boxing program.

“The origin of the course is really in my own martial arts background,” he says, “and I know how fascinating it is from a holistic standpoint — it’s philosophy, economics, politics, violence, media, history.”

In addition to covering topics that relate to a broad range of majors, Haanstad says that the course introduces students to sports they may be unfamiliar with — a particular point of interest in a class that’s often dominated by members of the football team.

Over the course of the summer session, students learn about styles that range from Chinese gōngfu to Indonesian pencak silat to French savate. Classwork is mostly intellectual rather than instructive in sporting techniques, but the professor nonetheless hopes it sparks an interest for some.

“I’m hoping they maybe explore martial arts as a practice in some form,” he says, “whether that’s Brazilian Jiu Jitsu or boxing or maybe even joining the Martial Arts Institute.” 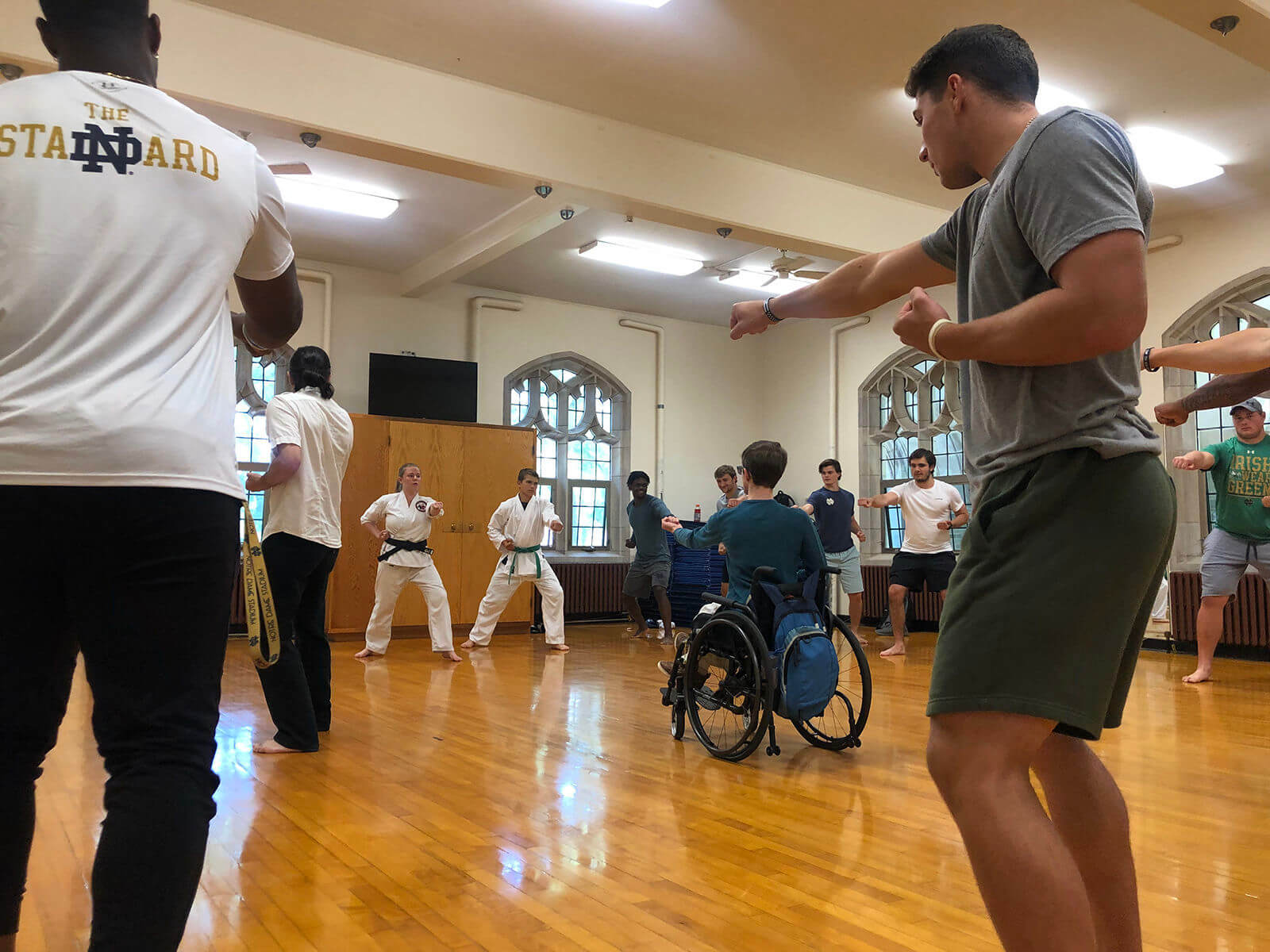 Back in Rockne Memorial, McCray’s tutorial is the students’ first attempt to actually try out the techniques they’ve studied in class. She instructs the all-male group to pair off, and they quickly do — including Haanstad himself. The professor’s sparring partner is Paul McDowell, a South Bend local who is applying these summer-break credits toward his degree at Ohio State.

McDowell, who uses a wheelchair, says that he has been impressed by “the amount of power martial arts gives you.”

“Because, you know, it’s not about size. It’s about skill and swiftness,” he explains. “I came in with no martial arts background at all, but I’ve learned a ton and had a great time doing it.”

The class is cross-listed in many subjects including anthropology, philosophy, East Asian Languages and Cultures, Asia and Asian Studies, and Film, Television, and Theater. While my visit occurs on a day of action, the more typical materials in the course range from readings of Neil L. Whitehead and Marshall McLuhan to clips from Bruce Lee movies and The Matrix, as well as music and live demonstrations.

Rising senior (and Fighting Irish running back) Tony Jones Jr. has enjoyed the cultural aspects of the class.

“I liked learning about the Wu-Tang Clan, the group,” he says. “Learning about how they rap about fighting. They use it in a way that relates to martial arts.”

“We start with The RZA, The Tao of Wu,” he says. Rapper-producer The RZA founded the Wu-Tang Clan in the early 1990s, and in recent years he wrote two books about the group’s origins, including Tao. “[It’s] the sort of philosophy of the band and of making music, but also a philosophy of martial arts and of martial arts popular culture like kung fu films.” The sport’s culture has been so formative in the band’s history, Haanstad says, that their music can almost be considered “an audio martial art.”

While Jones enjoyed the Wu-Tang unit of the class, other students found the field trips particularly engaging. In addition to touring on-campus locations such as Notre Dame Boxing’s pit and the Rockne Memorial Gymnasium, the class also visited the Kyushiki-Ryu School of Kempo-Jutsu in Mishawaka for demonstrations. 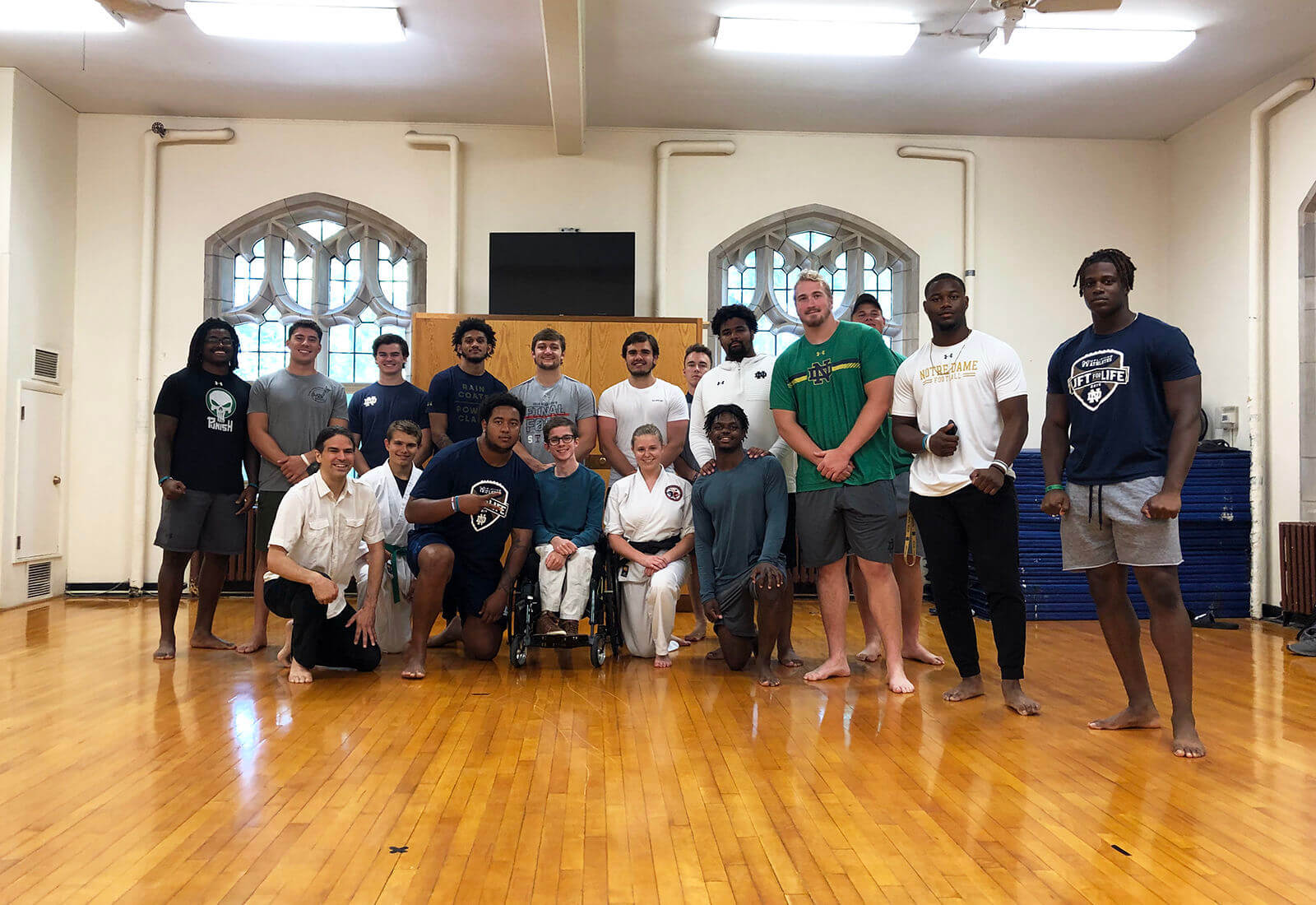 “Going to the dojo was pretty cool,” says rising sophomore Alex Fontana, referring to the Kyushiki-Ryu trip. “We got to see a type of kung fu and we got to learn about the different styles of martial arts. So there is sparring and there is defense. One is more just for style. One is for absolute damage.”

Absolute damage is a frightening idea in a room of Division I athletes, but during my visit, McCray fearlessly instructed the class’s footballers in both defensive and offensive techniques, correcting posture and explaining when to use various moves.

The students similarly fought their way through the semester’s coursework with Haanstad’s guidance, completing two presentations and a final essay.

Along with a newfound appreciation of these forms of mental and physical exercise, the students leave the course with a further understanding of the sports’ influence on international popular culture.

“I love the idea that maybe they’ve thought a little bit further about media in general,” the professor says. “The effects or extension of media, what it does globally, how it works, the complexity of it.”

Occasionally, the martial arts influence on media extends even to social media — as the end of McCray’s lesson demonstrated.

“Can you do the bottle cap challenge?” a student asked the sensei-for-the-day as class wound down.

McCray confidently extended a discarded water bottle toward her demonstration partner, sophomore Sam Bosio. In a rare moment of silence, the class watched with anticipation as Bosio confidently performed a high kick, slapping the green bottle cap across the room.

Professor Haanstad had never seen the popular internet videos featuring similar demonstrations, but he laughed at the successful live performance.

“It’s always a lot of fun,” he says of the course. “It’s a huge highlight for me in the summer.”

Nicole White is an intern at this magazine.