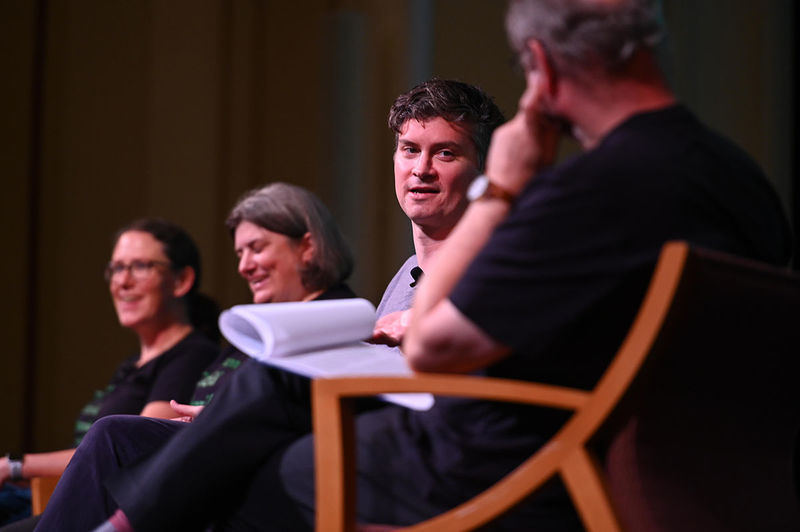 Michael Schur speaks at Washington Hall during his visit to Notre Dame. Photo by Barbara Johnston

In a small classroom in the basement of the DeBartolo Performing Arts Center, junior Lynette Wukie sighs and laments, “Why can’t Chidi just grow up?” The other students in the class burst into laughter and nods of agreement, and several chime in with their opinions on the cheesiness of the latest season and how the main characters’ relationship is not meeting expectations.

Wukie and 16 other students are part of The Good Class, a one-credit course centered around the hit NBC show The Good Place. The class is a crossover project between the philosophy and film, television and theater departments. Students from both groups have come together in what seems to be the ideal college class — watching TV for homework and coming in to discuss their thoughts on plot twists and favorite characters.

There is more to the curriculum, though, than just speculating about what the fourth season will bring. Professors Christine Becker of FTT and Meghan Sullivan of philosophy, two of the three self-described “architects” of the course, each say that the show is a fascinating case study in their respective fields.

“When I watched the pilot, I realized just a few minutes in that this was a show about utilitarianism,” Sullivan says. “I went on Facebook and I was like, ‘Are you guys watching this? There’s a show on NBC doing philosophy. Do they even know this is philosophy?’”

During Sullivan’s philosophy course the following semester, students began to use characters from the show as examples in their presentations. When Sullivan learned that the show’s creator, Michael Schur, had a Notre Dame connection, she invited him to speak on campus. Schur, the husband of television writer J.J. Philbin ’96, has created other well-known sitcoms, including Parks and Recreation and Brooklyn Nine-Nine.

“When he emailed me that he would come, I started bragging to everyone,” Sullivan says. “I was a nonstop brag-fest. So that’s how Chris [Becker] got involved.”

When their mutual friend and the class’ third instructor, Browning Cinema’s program manager Richard Herbst, brought up the possibility of FTT getting involved since Schur was coming, Becker literally stood up in the restaurant where they were eating and, in her own words, “called dibs” on the class.

“The Good Place is traditional and rule-breaking at the same time, which fascinated me,” Becker says. “It’s extremely creative within the structure of network television. It makes demands on the viewer to keep up. It was totally in my wheelhouse.”

The crossover with the philosophy department also interested Becker and the three architects got together in January to begin creating a syllabus for the six-class course. They required interested students to apply — filling out a form with “nerdy” jokes and references to the show —to find the best candidates for the class.

“We wanted it to be fun and hit the ground running,” Sullivan says. “We needed the most hardcore students who would have nothing they would rather be doing — just pure, intrinsic value. We needed students who really got the show, who were clearly just looking for a place to have this kind of discourse.”

With only one credit toward their FTT or philosophy major requirements, the students were essentially signing up for a passion project. The original cap was 12 students, but the professors ended up accepting 17, all of whom had a private lunch with Schur when he came to campus on September 16.

Sitting in DPAC for class later that week, the students gush over Schur, commenting on his intelligence, eloquence and sincerity in his answers to their questions about both philosophy and television.

“He had the right mindset,” senior philosophy major Samuel Kennedy says. “His reactions to learning about philosophy were mirrored in Eleanor (the show’s main character) throughout the first season and he ended up, in my opinion, in the right place with Aristotle’s theory of virtue ethics.”

The class meetings are usually split into two parts. The students watch episodes of The Good Place for homework, then start by discussing the technical television aspects of the show. For instance, during one class period the students compared the original and final scripts for the pilot episode. Then they move into the philosophical questions the show raises, such as the famous “trolley problem” and the overarching theme of applying different philosophical theories to real-life choices.

Sullivan is impressed by what she sees as Schur’s optimism that centuries-old philosophical questions can intellectually challenge and morally affect sitcom viewers. During the first season, Chidi tries to teach Eleanor how to be a good person. The nature of such instruction is part of a longstanding debate in philosophy, dating back to the ideas of Socrates and Aristotle, about whether it’s possible to learn how to be good.

“One of the things that’s awesome about The Good Place,” Sullivan says, “is that it explores that puzzle, of whether Eleanor can be saved.”

Junior film major Alex Bakeis had not seen the show, but decided to apply for The Good Class because he was a fan of Schur’s work and wanted the opportunity to learn more about the industry during his visit to Notre Dame. He also has gained a new appreciation for philosophy.

“The media we see these days can spark conversation about politics, but we usually don’t see other fields woven in that same way,” Bakeis says. “At the end of the first season, the cliffhanger doesn’t just change the trajectory of the plot, but for the philosophical perspective of the show, which adds a lot.”

Becker says she’s been happy to see students from both disciplines chiming in on conversations about the other, fulfilling the professors’ goal of integrating the discussion of the show. “Teaching this class reminds me why I love doing this job,” she says. “It’s a mix between, let’s just hang out and talk about this show, but let’s do it in an intelligent way that will reveal things that we wouldn’t find out if we were really just sitting around talking about it.”

The professors are considering more potential crossover classes the future, bringing up Stephen Colbert as an option — if, of course, he would accept an invitation to campus.