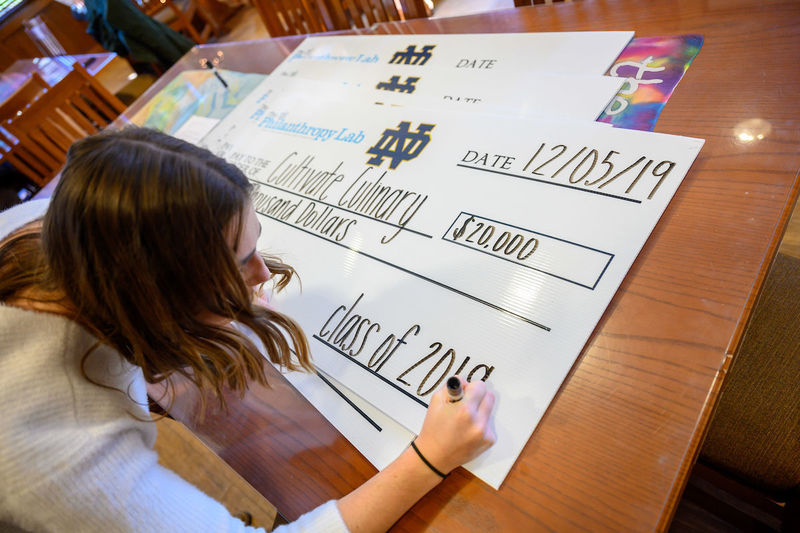 If you were in a college course that requires you to give away thousands of dollars to local nonprofits, how would you spend the money? Would you support an organization that makes our environment safer? How about one that helps prisoners re-enter society after they have served their time? A nonprofit that feeds hungry children?

Thanks to an organization called The Philanthropy Lab, which sponsors courses at nearly 20 schools nationwide, I guided 25 Notre Dame undergraduates through that process during the 2019 fall semester. In the course, Philanthropy and the Common Good, they were tasked with making tens of thousands in grants to nonprofits in the South Bend area.

At first, the students seemed perplexed, like there must be some kind of catch. The only rules were that the class had to award between three and six grants, and that each had to go to established 501(c)3 local organizations.

Our amount of grant money was not set from the start. Since there were 25 students enrolled, we had a minimum of $50,000 to award. We could earn more grant dollars from The Philanthropy Lab through incentives as the semester progressed, such as students making individual lifetime giving goals and agreeing to follow up with their philanthropic activity years down the road.

The Philanthropy Lab encourages students enrolled in its sponsored courses to make a goal — not a pledge — about how they hope to participate in philanthropy in the future. For example, a goal might be to give 5 percent of one’s income to charitable causes once student loans are paid off. The class receives an additional $1,000 in funding for each student who makes a goal. The Philanthropy Lab then surveys students years later to determine if students in these courses end up being more generous than the average person.

The lab also offers an additional $10,000 to disburse if the university president attends a class award ceremony at the end of the semester. Those incentives meant the class would likely have between $60,000 and $85,000 to give away. I had 16 weeks to work with 25 of the smartest young people I had ever met to get it right.

I asked the students to divide themselves into six teams. Each team was required to visit two organizations early in the semester, then make presentations to their classmates about what they learned there. We would spend the remainder of the semester analyzing proposals about each nonprofit to determine which should receive the funds.

Two class days before Thanksgiving would serve as board meetings in which students voted on the grants. We’d also spent several sessions focused on theory, the history of philanthropy, how mega donors such as Bill Gates shape giving, and how to define and promote the common good.

One often cited definition of the common good is that it is “the sum total of social conditions which allow people, either as groups or as individuals, to reach their fulfilment more fully and more easily.” We find this definition in Gaudium et spes and used again and again by the Church. Of course, no single definition solves the puzzle of how to give money away most effectively for the betterment of society. That’s one element that makes the course so exciting to teach. I was able to see the students wrestle within themselves and with each other about how to best use the money.

One of my goals as the instructor was to not influence the grantmaking whatsoever. We all have areas of interest when it comes to giving and volunteering. I wanted the grants to reflect the students’ interests and their determination of how the money could best serve the common good. I trusted them to make the tough decisions.

By early October it was time for the groups to make their presentations to the class. In the interest of not influencing the grantmaking and to avoid the risk of adopting a favorite organization of my own, I decided not to make any site visits. I would learn about the options through the presentations.

The course took on a different feel at that point. The students came to a realization about the painful decisions ahead. Of the dozen organizations they collectively visited, at most only six would benefit. Some students had their favorites, organizations that addressed issues personal to them or where they spent hours touring facilities and getting to know the people involved. I could tell just how seriously the students were taking the responsibility. A course about giving money away sounds fun, maybe even easy. In reality, it’s a lot of work, requiring tough choices that are both analytical and emotional.

As Thanksgiving neared, they prepared for a few class sessions of conversation and debate. I tasked certain students to run the board meetings and call the votes. The discussions were civil, yet at times intense. Some students prioritized funding projects at organizations such as Cultivate Culinary and A Rosie Place for Children, which both serve local children. Others recognized the importance of helping local youth but pointed out the necessity of serving often-overlooked adults, arguing for support of nonprofits like Imani Unidad and Neighbor to Neighbor that meet their needs. Each of those organizations ended up receiving funding from the class, in amounts the students negotiated diplomatically to determine.

Notre Dame’s president, Rev. John Jenkins ’76, ’78M.A., did attend our awards ceremony, celebrating with the students and the grant recipients, his presence securing for the class that extra $10,000 from The Philanthropy Lab. He gave insightful remarks, stressing that while the grants are important and will do much good in our community, the real value comes from the life lessons students learn about the importance of making a contribution to society and the necessity of striving to make the world a better place.

As I told the students during our final class, Father Sorin’s call for Notre Dame to be a force for good in the world challenges all of us who are lucky enough to pass through this institution.

They are off to a great start.

Jonathan Hannah is program director for the Law School’s Program on Church, State and Society. He will teach Philanthropy and the Common Good again during the fall 2020 semester.