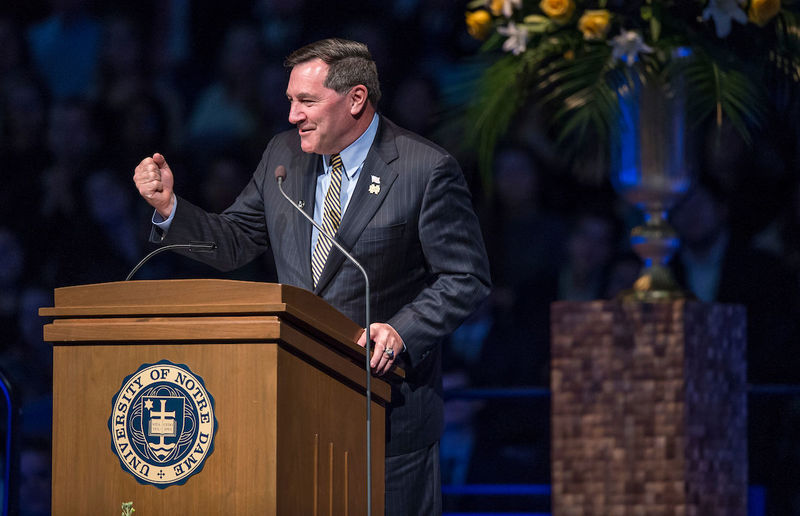 Joe Donnelly had the simplest of dreams in 1973 when he showed up for his first semester on campus.

He was a first-generation college student from New York, a devout Catholic and surprised beyond belief that he qualified for admission for a school as esteemed as Notre Dame.

“My expectations were simple. I wanted to make my family proud,” he says. “I wanted to earn my diploma.”

He found much more than a diploma here. He found sustenance. Ideas came alive in classes taught by John Roos and Father Thomas Blantz, CSC. Inspiration came from the presence and example of the university’s president, Rev. Theodore M. Hesburgh, CSC.

In 1977, he received his bachelor’s degree in government studies. Four years later, he added a juris doctor degree as a Double Domer at the law school. With Notre Dame’s help, he was on his way to a productive career in national politics.

Through his time here, he found one main lesson — that leadership isn’t about latching onto one ideology or another. “Good ideas aren’t right-wing or left-wing,” he says. “Good ideas are simply good ideas. It’s our responsibility to do what is right.”

In a nutshell, this is the message Donnelly hopes to revive and recycle, now that it is finally his turn to teach.

The former senator is one of the latest politicians that Notre Dame has brought in as “professors of the practice” in the fields of politics, economics and global affairs. David Campbell, chair of Notre Dame’s department of political science, sees the approach as a unique opportunity at the University.

“The study of political science is strengthened when students hear from people with real-world policy and political experience,” he said when the program was announced. “Having former officials in the classroom provides important insights for students — an opportunity to put the theories we study to the test.”

Donnelly’s own Notre Dame government degree has been tested in a series of real-world political roles. Elected to the U.S. House of Representatives in 2006, he served northern Indiana voters for three terms before running successfully for a term in the Senate in 2012.

A centrist Democrat in a solid red Republican state, he lost his bid for a second Senate term in 2018. Now, at age 63, he is ready to share his experiences with students who were born too late to be inspired by the likes of Professor Roos, Father Blantz and Father Hesburgh.

Donnelly claims that he jumped at the chance to return to campus. “This place is part of my soul, part of my core,” he says.

Though his work with students began this spring with guest lectures in a handful of classes, Donnelly’s appointment gained wider publicity when it was announced last month that one of his former colleagues would be joining him on campus.

Paul Ryan, the former Speaker of the House and Republican architect of the 2017 tax reform law, will be guest-lecturing in two political science and two economics classes in the fall 2019 semester. He is also slated to appear in two other courses, Campbell says: an Introduction to American Politics class and a junior seminar called the Divided States of America.

A graduate of Miami University in southern Ohio, Ryan served 10 two-year terms representing a district that includes his hometown of Janesville, Wisconsin. During his tenure, the fiscal conservative was an advocate of privatizing Social Security and Medicare and worked for the repeal of the Affordable Care Act, also known as Obamacare.

In addition to their guest-lecturing work — Donnelly and Ryan will occasionally speak to the same classes, though not at the same time — the former lawmakers are also tentatively expected to participate in public lectures on campus. Their schedules will partially echo that of Denis McDonough, the former chief of staff to Barack Obama who has served as a professor of the practice in the Keough School of Global Affairs since 2017.

Unlike Ryan and McDonough, Donnelly will also be taking on a solo teaching assignment next semester, helming a one-credit undergraduate course called “America’s Strengths, America’s Challenges.” With just 12 seats in the class, Campbell says it was a hot ticket during course registration.

“We reserved seats for an equal number of sophomores, juniors and seniors,” he explains. “That way, we could have an equal distribution across the three groups.”

The mood of the country being what it is, you might expect some heated discussions and maybe some raw emotions during Ryan’s and Donnelly’s lectures. Is Campbell worried about that?

“Based on my experience with the class Donnelly led this past semester, this was not an issue,” he says. “The students were respectful and genuinely interested in hearing from the senator.

“I concede that Ryan will be more controversial, but, given the culture of Notre Dame, I would be surprised if he was met with rudeness. He will likely be asked tough questions by the students, but that comes with the territory. I would like to think that Notre Dame students are good models for disagreeing without being disagreeable.”

For his part, Donnelly attended Notre Dame in an era when students nationwide and locally were vociferous and sometimes violent in protesting the military’s involvement in Southeast Asia and in rebelling against the cultural limits placed on non-male, non-white, non-wealthy Americans.

Many of those same issues, or similar ones, are equally combustible 40-some years later.

Standing in front of a classroom, the senator says, has given him a chance to revisit his own ideas. Students know his record. Many of them may disagree with how he voted on the Affordable Care Act, on America’s presence in Afghanistan, on the DREAM Act, on the right to own assault weapons or on same-sex marriage.

“I need to be prepared every day and bring my A-game,” he says. He’s willing to take any criticism and hear any argument, he claims, on one condition: “Back it up with facts. If you have a position, have a reason for it.”

As for teaching in the same system as Ryan, Donnelly sees it as a chance to be teammates again. The two worked together (amicably, he says) for six years in the House before Donnelly moved to the Senate, and on one occasion, they even played on the same athletic team. In a 2009 fundraiser for Capitol charities, Ryan and Donnelly hit the gridiron together, as a wide receiver and a tight end, respectively.

In football terms, Donnelly now holds the home-field advantage in that Ryan will be commuting from Wisconsin for classes while the former senator can breeze over to campus from his home in nearby Granger.

And while they may differ politically on virtually everything Congress has done in the past decade, it won’t make them enemies.

“We will disagree and still be friends,” Donnelly said.