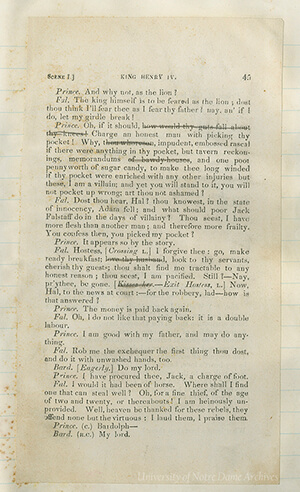 A page from King Henry IV, Part I with notations, from the Professor Joseph A. Lyons Papers, University of Notre Dame Archives. Click the image to enlarge.

The Notre Dame Shakespeare Festival — which closed out its 19th season late this month — may be the most recent example of the Bard’s work on a Notre Dame stage, but the tradition of Shakespearean performances on campus dates all the way back to 1847. The University Archives holds scripts used in a few of these 19th century campus productions, including an 1877 performance of Julius Caesar and an 1878 performance of Henry IV, Part 1.  The latter seems to have been a special favorite at Notre Dame during the University’s first century — it was both Notre Dame’s first Shakespeare production and the one most frequently re-staged, playing no fewer than 11 times between 1847 and 1941.

The 1878 Henry IV script in the Archives collection is part of a scrapbook chronicling that year’s productions during the Washington Day Exercises on February 21st and during commencement week in June. This edition was published with some very substantial cuts, including the famous sequence where Prince Henry and John Falstaff playact a meeting between the Prince and his father the King, foreshadowing the ending of Henry IV, Part 2.

As shown here, the manuscript also shows penciled edits made for the Notre Dame performances. Passages excised include a few lines that were presumably too gory, such as “Up to the ears in blood,” and “O, if it should, how would thy guts fall about thy knees!” Bawdy references were also removed, and Prince Henry now jokes about buying “acres” instead of “maidens.” (To see the script notations in more detail, click on the image to see a larger version.)

Every female character was either cut out of the play entirely or rewritten as a man. These alterations limited the selection of viable Shakespearian works that Notre Dame's all-male student population could stage. The 1879 Notre Dame production of The Merchant of Venice employed the traditional Renaissance practice of casting boys as women.

In the 20th century, Notre Dame began recruiting faculty wives and daughters as well as Saint Mary’s students for its theater productions. Eventually, coeducation put the issue to rest, and role reversal has come full-circle with women occasionally playing characters that Shakespeare wrote as male.

More information about the history of Shakespeare at Notre Dame can be found in FTT Professor Emeritus Mark Pilkinton’s chapter on staging in Shakespeare on the University Stage, edited by Andrew James Hartley (Cambridge University Press, 2014).