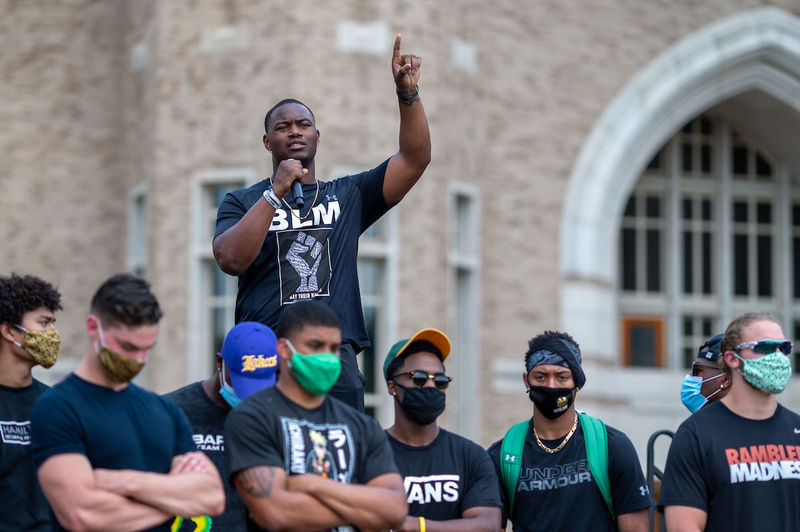 Notre Dame football players led a campus celebration of Juneteenth on Friday, June 19, calling for a commitment to racial justice and to the Black Lives Matter movement.

“For all Black people in this country, today is our Fourth of July. It’s our Independence Day. And may it always be recognized as such,” said Daelin Hayes ’20, a graduate student and defensive lineman on the football team.

His comments drew cheers from a crowd of several hundred people from the Notre Dame and local communities, many of them wearing black shirts to symbolize their support, gathered on the Irish Green near the main entrance to campus. Participants wore face coverings because of the coronavirus pandemic and they were encouraged to practice social distancing.

Juneteenth celebrates Black history and freedom. On June 19, 1865, Union Army General Gordon Granger arrived in Galveston, Texas, and announced federal orders proclaiming that all slaves in Texas were free. Although President Abraham Lincoln had formally freed the slaves with the Emancipation Proclamation more than two years earlier and the Civil War had ended in April 1865, Texas was remote and enforcement of proclamation hadn’t been inconsistent.

The campus gathering, organized by the athletic department and the football team, featured remarks and prayers, followed by a unity walk across campus.

Based on his own experiences, Hayes offered advice about how to become an ally in the Black Lives Matter movement and help bring about change, which he said requires a three-fold commitment: to the community, to diversifying one’s perspective and to accountability.

After suffering a season-ending shoulder injury last fall, Hayes devoted time to volunteer work in the South Bend community. He described how he went to Notre Dame’s Robinson Community Learning Center, which led to him becoming a conflict resolution volunteer at Lincoln Elementary School in South Bend.

“Notre Dame cannot just be an ideal,” said Hayes, who urged a commitment to the entire community. As he learned last year, “We were right down the street from these little black and brown kids that need our leadership and mentorship.”

Head football coach Brian Kelly told the crowd he realized after watching the police killing that prompted the recent Black Lives Matter protests across the nation that he had to get involved.

“Standing on the sidelines was no longer an option,” Kelly said. “I too, like many of you, had to learn.” He started by listening closely to his players. The coach said he couldn’t be more proud of the young men on his team than he was when they described their experiences facing inequality and racism.

“I did not know what Juneteenth day was,” Kelly said. “I had to open up my eyes and learn more about what the day meant.”

Making substantial change will require serious energy to improve public schools and create a health care system that better serves Black Americans, Kelly added. “Across the board, this is change that really matters. And Black lives matter when it comes to those things.”

Kelly urged everyone to enjoy Juneteenth, but not to limit their involvement to one day. “I’ll continue to open my ears and my eyes, and continue to educate myself,” he said. “It’s a real cause that we have to keep championing every single day.”

The Notre Dame athletic department issued a statement June 5 vowing to “both create change locally and be a catalyst for change nationally,” and highlighting areas in which to improve, including listening more closely to African American student-athletes, amplifying their voices and building a more diverse professional staff.

Student Max Siegel, an offensive lineman, said Notre Dame’s Black students have been unduly burdened to explain the African American experience to white classmates. Questions such as how one grooms black hair can be abrasive and hurtful, he said. “This responsibility should not lie on our own students,” Siegel said.

He urged changes to the Moreau First Year Experience seminar, a course required of all freshmen, to help better educate all students about issues of race and culture.

Siegel referred the crowd to an online petition started by the Black Alumni of Notre Dame. The petition, which has gathered more than 10,800 signatures so far, calls for the University to take substantive steps to stop racism and to create an inclusive and respectful campus environment for Black students.

Student Myron Tagovailoa-Amosa, a defensive lineman, offered a prayer at Friday’s gathering for all the families whose lives have been affected by injustice, inequality and racism.

“On this Juneteenth day, help us each to make a commitment in our hearts to fight racism in whatever form it appears among us or in our hearts,” Jenkins said. “And treat all with the dignity and respect they deserve.”