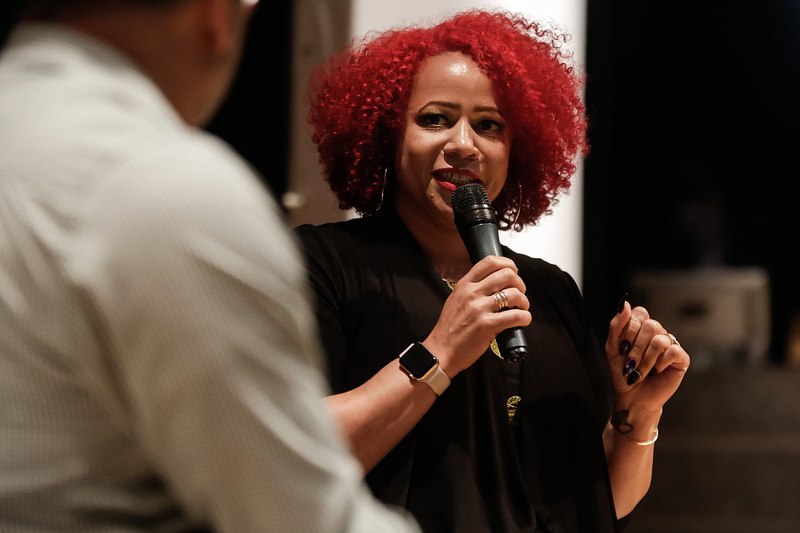 “This was not a backwards, not-profitable institution. This is the institution on which the wealth of this country was built.”

In a recent talk at the Art Institute of Chicago, Nikole Hannah-Jones ’98 expressed this sentiment to let the audience know early on that slavery — the subject of her 1619 Project at the New York Times Magazine — cannot be discounted in the history of the United States.

“The Struggle for Justice” convened on October 8 with the 1619 Project at its center. Hannah-Jones, the project’s lead writer, opened the event with a keynote about the origins and content of the initiative, a series of articles, essays and poems that seek to establish 1619, when the first slave ship arrived in the Virginia colony, as America’s true founding year. She talked about the economic impact of the “peculiar institution” — at its height, the value provided by the work of enslaved people exceeded that of all the nation’s railroads combined — and about the lasting effects of slavery that persist in the U.S. today.

One of those effects, as Hannah-Jones and her fellow speakers explained, is discrimination in the criminal justice system. A panel of academics and creatives who work with incarcerated men, women and children followed the opening keynote, each arguing (as this piece in the 1619 Project did) that justice-system hallmarks like inhumane treatment and disproportionately harsh sentencing for people of color can be traced directly back to habits established under slavery. As School of the Art Institute instructor Jason Boulware pointed out, incarceration and slavery even have a constitutional link — the 13th Amendment’s prohibition of slavery has one exception, for punishment of a crime.

The Chicago event is the latest in a series of speaking engagements and media appearances for Hannah-Jones, whose pre-1619 Project accolades include a 2017 MacArthur Foundation “genius” grant.

Sarah Cahalan is a graduate student at the Medill School of Journalism at Northwestern University and a former associate editor of this magazine.