As a Notre Dame freshman in 1986, I still remember enthusiastically learning the names and faces of the six (soon to be seven) Heisman Trophy winners. All Notre Dame students worth their salt could recite the sacred list on command: Bertelli, Lujack, Hart, Lattner, Hornung, Huarte; with Tim Brown joining the list a year later. These were demigods. Football icons. The president, pope and Jesus all rolled into one.

Last Sunday morning, like so many devout Notre Dame football fans, I read with sadness that Johnny Lattner had passed away. The newspaper obituary focused on his athletic prowess, first in Chicago at Fenwick High School, then at our beloved ND, leading to his enshrinement in that circle most cannot hope to enter, the Notre Dame Heisman Trophy Winners. But my reaction to the news surprised me, because my feelings about Lattner’s death on Saturday, February 13, had nothing to do with football — which said everything about him as a person. 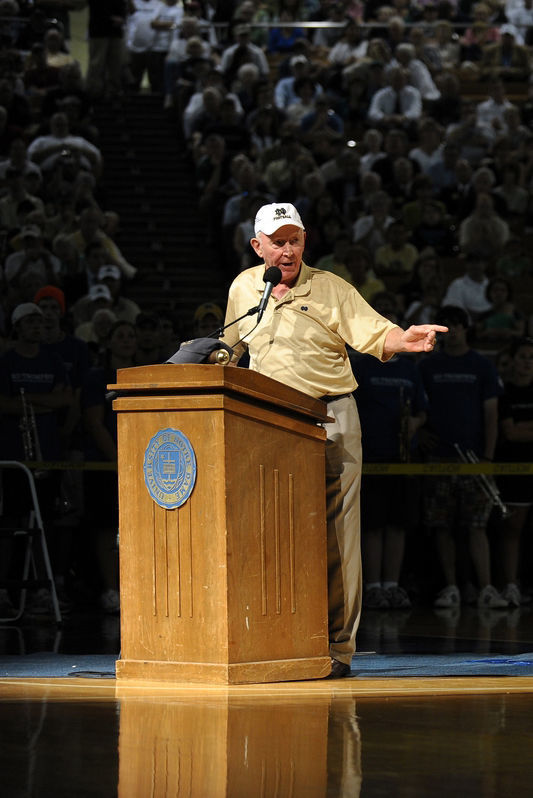 I only met Lattner briefly about five months ago. Saint Cletus, my parish here in La Grange, Illinois, was hosting a Fall Fest event, and I was a volunteer bartender on a crisp Sunday afternoon. Perfect day for football. A giant screen carried the Bears game in a large tent set up in the church parking lot. Many were cheering on our Bears, others enjoyed carnival rides and a sunny autumn afternoon, when Lattner approached the makeshift bar and ordered a beer.

“Mr. Lattner, what a surprise and honor to have you here!”

He smiled and waved me off somewhat sheepishly. Delivering his beer on the counter, I was starstruck at having this legend standing in front of me. Lattner had been so generous with his support at our past events, I said there was no charge for his drink. He thrust his drink ticket at me anyway, saying, “Oh no, this is a fundraiser, I couldn’t let you do that,” with a smile and wink.

I introduced myself as a fellow Domer and he spoke to me like an old friend. Asking about my Notre Dame experience, explaining how his son lived nearby and how he was enjoying the autumn. Then he said farewell, and with another wave rejoined his family and the Bears game.

What might get lost by many who haven’t met Johnny Lattner is his unrelenting generosity and kindness. Many times over the years he has donated his Heisman Trophy for a day, probably helping to raise hundreds of thousands of dollars for local charities and causes.

How many Heisman winners do you think would allow their precious trophy out of their sight for more than seven seconds? Lattner’s wore its many years and hard work with pride. Every scuff, scrape and tarnish is there for all to see. It resembles more an old doorstop than the magnificent honor it bestowed.

You see, to Lattner the Heisman Trophy was not about personal achievement. Instead it became his way of giving back to us all, over and over and over. He turned that trophy into hope and goodwill for so many people in our area. And he often accompanied it with pride and joy, attending these events, sharing an anecdote, meeting new friends. People took the Heisman home or to tailgaters or kids’ birthday parties. They took selfies with it. All the while, it generated funds for worthwhile causes, instead of collecting dust in a cabinet.

I believe Johnny Lattner’s Heisman Trophy represents an even bigger achievement today than it did when he won it in 1953, because of how he used it to help so many with no fanfare, no expectation, and with complete grace. That’s why I feel an emotional loss for someone I barely knew, but with whom I shared a bond that transcends sport.

John Rossmiller is a marketing communications solutionist living in the Chicago suburb of La Grange, Illinois.