The Murdy Family Organ survived disassembly into thousands of pieces, a half-week cross-country trip from Washington state packed inside a pair of tractor-trailers, a move-in day at the Basilica of the Sacred Heart powered by a chorus of undertrained volunteers, and a whirlwind reassembly that wrapped up three days ahead of schedule on August 11 — with plenty of time left to set pews back in place and sweep up for Masses at the start of the 2016-17 school year. 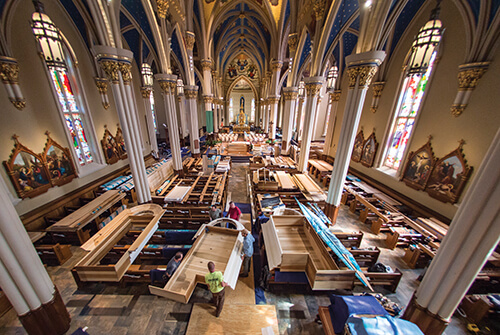 The organ itself — along with, presumably, the many people on campus who’ve had a hand in its creation — breathed its first sigh of relief two weeks later. At that point, enough stops and pipes were ready for the basilica’s music and choirs director Andrew McShane ’93M.M. to play “Happy Birthday” for donor Diana Murdy when she and her husband, Wayne, visited to see the work in progress on their gift. Organ builder Paul Fritts and his colleagues expect the tasks of connecting, tuning and voicing the organ’s 5,164 pipes to continue through the fall semester. Wonder what the Murdys saw? Check out a video about the late-summer arrival of the 70-stop organ, designed to support congregational singing in the basilica’s unique acoustical environment, and a time-lapse of its installation at magazine.nd.edu/basilica-organ.

An August peace agreement represented a major step toward ending decades of armed conflict between the government and rebels in Colombia. Scholars from Notre Dame’s Kroc Institute for International Peace Studies will play a key role in the implementation and monitoring of the South American country’s agreement.

Kroc’s Peace Accords Matrix tracks the progress of dozens of provisions, from ceasefires to constitutional reform to verification, in global peace deals. Drawing on data from the matrix, the Kroc Institute will be responsible for designing assessment methods and assuring neutrality in evaluating the implementation of and compliance with the Colombia agreement’s stipulations.
Kroc director of policy studies David Cortright says this is the first time a university-based research center has had such direct involvement in the enactment of a peace agreement. It’s an extension of the institute’s long involvement with the Colombian peace process through representatives such as international peacebuilding professor John Paul Lederach and mediator Francisco Diez.

“By applying scholarly research to the practical challenges of implementing the agreement,” Cortright says, “we hope to help Colombia move toward greater peace and stability.”

Call them the Fishing Irish. Football player Josh Anderson and hockey player Bo Brauer moonlighted with rod and reel in July, representing Notre Dame in the Fishing League Worldwide collegiate tournament on the Mississippi River in Prairie du Chien, Wisconsin. The pair caught five bass, the tournament limit, weighing 10.6 pounds. That earned them a 17th-place finish among the 85 entries, 3.4 pounds behind the University of Wisconsin-Platteville’s winning team.

Notre Dame will offer an online master’s degree program in data science beginning next August. Developed in collaboration with AT&T, the 21-month program will be geared toward working professionals with a curriculum focused on real-world projects.

“Graduates will have the flexibility of mind to master new data science processes, tools and strategies as they emerge, and the ability to communicate effectively and act ethically in this exciting and fast-moving field,” says Elliott Visconsi, Notre Dame’s chief academic digital officer.

On Ireland’s rural west coast, the new center is a departure from the urban locales of Notre Dame’s other Global Gateways — in Dublin, Beijing, Jerusalem, London and Rome. Home for nearly a century to a community of Benedictine nuns and formerly a boarding school, Kylemore Abbey offers a setting for educational and spiritual reflection.

Open since May, the center already has hosted such events as an environmental law conference, a creative writing seminar and an Alliance for Catholic Education retreat.

The iconic image of Father Theodore Hesburgh, CSC, and Rev. Martin Luther King Jr. joining hands while singing “We Shall Overcome” at a 1964 civil rights rally in Chicago will be commemorated with a statue in downtown South Bend.

Local artist Tuck Langland, a retired Indiana University South Bend art professor, will create a bronze sculpture that will be “interactive,” encouraging people to join hands with Hesburgh and King.

“We hope people will approach it and join in that human chain,” South Bend Mayor Pete Buttigieg told the South Bend Tribune.

The slightly larger than life-size sculpture will be installed next year at South Bend’s Leighton Plaza across from the County Courthouse on Main Street.

Notre Dame’s College Republicans showed none of the reticence of other student GOP organizations, posting its full-throated support of Donald Trump on Facebook in August. Groups at Harvard and the University of Pennsylvania, among others, have declined to endorse the party’s nominee.

In addition to their belief that Trump is the only candidate committed to protecting the unborn, the Notre Dame organization’s officers wrote that “he is the first presidential candidate ever to receive an NRA endorsement before the conventions, demonstrating his commitment to our second amendment rights. His endorsement from the West Virginia Coal Association shows his dual commitment to American energy independence and blue-collar jobs.”

The post also expressed confidence in Trump’s economic plan “to unleash the power of American industry” and in his selection of Indiana governor Mike Pence, whose defense of life, religious liberty and stewardship of the state’s economy the club applauds.