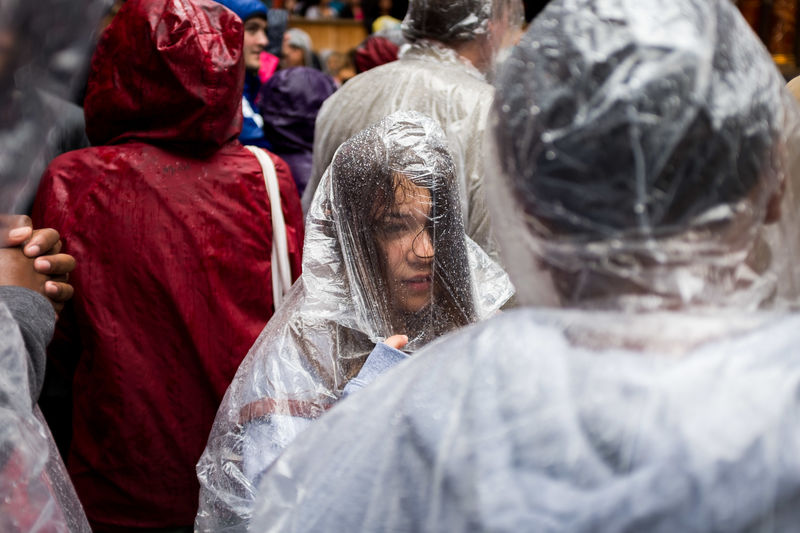 Everyone has a saturation point. So soaked after a rainy walk across London’s Tower Bridge on Wednesday afternoon that they might as well have backstroked the Thames itself, members of the Robinson Shakespeare Company approached theirs.

They faced the prospect of three hours on their feet in the standing yard “seats” of The Globe, like the penny-entry groundlings of William Shakespeare’s day, open to the elements, to watch a performance of Much Ado About Nothing.

The day before, in more welcoming weather conditions, the ensemble had visited the replica of the theater where Shakespeare’s plays were produced during his lifetime. As excited as they might have been to see professionals perform in that iconic venue, the squish of their shoes, along with heavy legs and eyelids from a whirlwind week in England, dampened their enthusiasm. 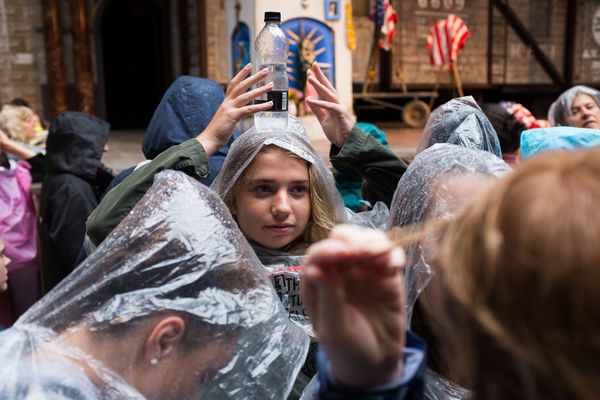 Ellie Graff and members of the Robinson Shakespeare Company await a rainy performance of Much Ado About Nothing on Wednesday at Shakespeare's Globe in London. Photos by Ryan Blaske.

As they lingered as long as possible inside the lobby, their collective aura was waterlogged. Their minds wandered somewhere warm and dry as they trudged out underneath the Globe’s open roof. Once again into the incessant, pattering rain.

Robinson Shakespeare director Christy Burgess distributed Globe ponchos adorned with a line from the Merry Wives of Windsor: “Let the sky rain potatoes, let it thunder to the tune of Greensleeves.”

Time to summon whatever stamina they could, at least until intermission, when they would have the option of returning to Notre Dame’s Conway Hall where they’re staying for the week.

Then Beatrice and Benedick started sparring and a Much Ado About Nothing set in the revolutionary Mexico of the early 20th century came to life, first flickering in the damp, then roaring like a torch flame. Gunfire and cracking whips. Romantic matches and mismatches. Accusations and denials. Mistaken identity and faked death. Song and dance.

A covered stage shielded the actors from the rain while the standing audience in front of them had only the quotation marked clear plastic for protection. For most of the Robinson ensemble — a few did exercise their intermission exit option — the poncho turned out to be enough.

As the Much Ado cast unspooled the story, peeking through the fourth wall from time to time to deliver winking asides, the young Shakespeareans visiting from South Bend became invested. They wanted to see it through. They bobbed along to the musical interludes. They took delight in the occasional off-color reference. They laughed a lot. 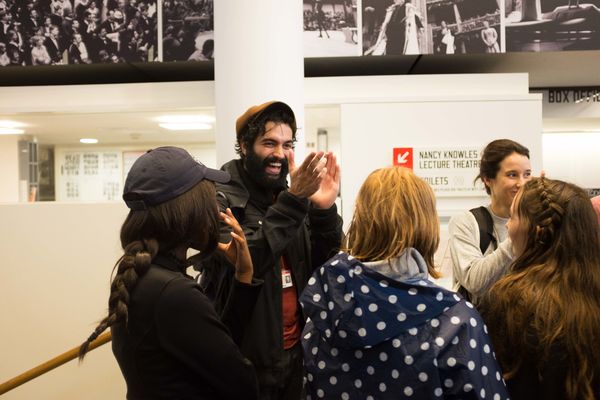 Charlie de Melo, who plays Borachio and Friar Francis in The Globe's production of Much Ado About Nothing, meets with Robinson Shakespeare Company members after the performance.

After intermission, a brief dry spell gave way to rain again, falling as Claudio delivered a funeral oration. He stood on a pedestal off stage among the groundlings, absorbing the weather with the audience as he mourned his lost love, Hero. Claudio had humiliated Hero at the altar over accusations he now knew to be false and believed she had died from the shame. In the gloom, he grieved.

Beatrice and Benedick, meanwhile, circled each other in an ever tightening orbit toward an inevitable collision, their professed disdain no match for magnetic attraction. Not unlike the Robinson ensemble’s mood, actually, reluctance inching toward grudging acceptance evolving into a full embrace.

Then came the reward. After the show, in the lobby of the Globe, some Much Ado cast members emerged to spend a few minutes with the Robinson kids, chatting, laughing, hugging and mugging for their cameras.

Just like that, the little indignities of a day spent in the rain evaporated. Fond memories and keepsake photographs made Wednesday another bright spot in a week that’s been blinding with them.

At the risk of stealing an exit line from Much Ado’s Dogberry, played in this Globe production as a buffoonish American, I thought it went well. Very well.