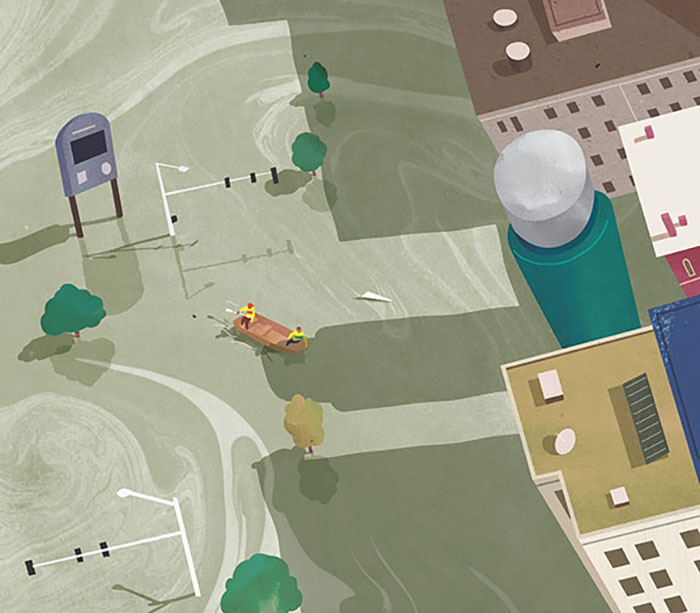 I bought a camping thermos because Alexander Chee claims Annie Dillard brought one to every class she taught at Wesleyan. It’s sage green, and the top is a small cup. I don’t know what color Dillard’s was, but her top was also a cup. This is critical — the rugged, utilitarian nature of a coffee thermos that will never be used outside of an office or library. It feels very serious to haul around a very large, piping-hot thermos.

My purchase was as much an exercise in frugality as it was to imitate the rhythms and habits of a favorite author — as if by occupying those same grooves and notches in my movements, by recreating her untwisting, pouring, sipping, gulping, nursing a burnt tongue, I might find some resonance with her, and my writing would be so much better for it, amplified by any feeble connection to her process.

So far, it has helped with neither frugality nor process. I still buy a cup or mason jar of cold brew more often than I ought to, and while my days are filled with writing because I am a journalist, those pieces lack the precision you’d expect from a so-called process. Journalism is adapting at the whim of someone else and scavenging for the time to pursue pet projects and piecemeal investigations. It’s unpredictable, and I never have my thermos with me. A thermos is a very silly choice for a totem or magical object anyway.

A writing routine, or at least a set of habits, is of the utmost importance — all the books and essays and interviews on writing I’ve read say so. Stephen King insists you set aside a few hours each morning to write, even on vacation, your birthday and Christmas. Julia Cameron, too, demands you extract your anxieties from your blocked creative pores through morning pages, no matter what your art is. Anne Lamott? Ditto — write every day. Chee, channeling Dillard, writes that anyone can learn to write: “It’s not rocket science; it’s habits of mind and habits of work.” I haven’t yet read what Dillard says, but I plan to. In lieu of writing, of course.

Writing is habits and schedules and routines and work and either large swaths of dedicated time or the hunger and drive to use up the smallest bits and scraps that come your way. I have neither, and certainly not enough raw talent to make it on that alone.

Journalists, especially young journalists, face an enormous amount of pressure to always be “on” — on breaking news, on what’s trending on social media, on whatever chatter is happening in the source network. The amount of work, even the “passive” work of consuming that occurs off the clock, is staggering.

And it’s draining: of time, of energy, or most often of both.

I moved from Michigan to Iowa as a compromise with my mother, who thought Alaska was too far away. I’m not sure if I actually would have committed to moving thousands of miles away to work as the only reporter in a teensy village, but it sounded like a great story. Now it’s only a hypothetical alternative lifetime — the fact is that I work in a newsroom on the Mississippi River. Before my interview, I had never crossed the Mississippi, had never even been west of Milwaukee. Now, living on the Illinois shore and working in Iowa, I cross the river at least twice a day, every day. I’ve been as far west as Des Moines. Iowa is much broader than we give it credit for. Its grasp is stronger and its reach longer than I imagined.

Several months into my job, the river came to meet me. Not by gently lapping at my feet, goading me to wade out. It crashed into the downtown after overcoming a levee. It invaded the newspaper’s parking lot, bringing a thick, sludgy stench that lingered after the concrete dried out. It smelled of ducks, too-bold geese, E. coli and the few fish that had made it past the railroad and as far as our lot. It pressed against the low-set windows of a coffee shop (and favorite writing spot) on the Illinois side of the river, 100 feet or so back from the shore. The Big Muddy was everywhere, ruining commutes, delaying trains and sabotaging local businesses, closing them for days or weeks. The flooding was historic and devastating enough to be used in presidential campaign ads tackling climate change. Many locals said it might be worse than the previous year’s flooding, but shrugged it off all the same.

When the downtown levee broke, I was there with my co-workers in minutes. No one was hurt, but I saw an apartment building evacuated by boat. I hugged Lynn, the manager at Barnes & Noble, my second workplace, when I went to interview the owners of flooded businesses. I hadn’t known she and her husband owned the record store.

I don’t know how long it took Lynn’s store to flood. It wasn’t deep — just a few inches. But a few inches over how many square feet? Not just in the record store, but along the entire block of the road that hugged the curves of the river. How many gallons of water leaked from the river, flooding the grassy waterfront so badly the soil couldn’t absorb any more? The water in the road never looked deep, but its vastness altered every drive. Every path was detoured.

It’s not that you couldn’t get anywhere — it just took far, far longer than it would have otherwise. But soon the extra time was accepted and forgotten.

For young writers, newspaper journalism used to be thought a practical route, a way to hone your skills, develop those all-important habits, and, with the stern hand of a good editor, exercise and beat your prose into something lean, sleek and active, without the mass of fluffy clauses and globby adverbs. In journalism, excess isn’t luxury. It’s dead weight.

Being a newspaper reporter is no longer a practical alternative. It is just as idealistic as pursuing writing as art with a capital A. Practical or not, it certainly has the potential to be fulfilling, even if it’s just potential.

The hours are bad. The pay is worse. The work is often unappreciated. And when a newsroom is strapped in the way most newsrooms are, the work can feel unimportant, productive without progress. Journalism is frustrating. It seeps or surges into every part of your life, on the clock or off. It floods your time. The fleeting moments when you’ve accomplished something good and have time to appreciate your own work are few but powerful buoys.

The first time I read Annie Dillard, I was 15 and I hated her. Later that semester, my teacher scrawled a note across the top of a paper urging me to become a professional writer. The first time I reread Annie Dillard, I was 22 and wrote for a living. I read on the treadmill at the gym next to a woman who didn’t look old so much as dry. She hunched over the bar, letting the full weight of her upper body rest on the hand towels she brought to cushion her hairless forearms.

This technique is not good running form.

Every step looked like she was tripping, falling into the realm of my responsibility as a bystander. Her eyes were closed, her mouth agape, but she did not breathe hard. She showed no trace of a runner’s high, but she was not as miserable as I was as I plodded along quite a bit more slowly. She just looked tired.

I reread Annie Dillard because Alexander Chee convinced me to in How to Write an Autobiographical Novel. I was transfixed by his essays: Roses bloomed in my eyes, tarot cards became more beautiful than T.S. Eliot ever dreamed and Annie Dillard’s thermos of black coffee and caramel candies made her more fantastically endearing to me than her icebergs and metal crosses ever had.

Mark Twain started his career at a newspaper 30 miles downriver from where I live and work, in the most significant bend of the river to flow from east to west, a slight detour from its final destination. Twain’s old paper marks where the jaunt swerves back south.

There are people who write for a living and people who are writers, and I desperately want to take that pivotal turn from the former to the latter.

When the river floods, it’s so easy to be flushed away from the current and into some shallow pool of polluted water. You stagnate in some parking lot, a neglected park or on the block of a favorite brewery. You wait for the waters to recede, sweeping you back on your way, but so much debris is left behind. You have to make your own way back, again and again.

Megan Valley’s essay was one of three second-place winners in this magazine’s 2019 Young Alumni Essay Contest. Valley writes about education for the Quad-City Times and lives in Moline, Illinois.