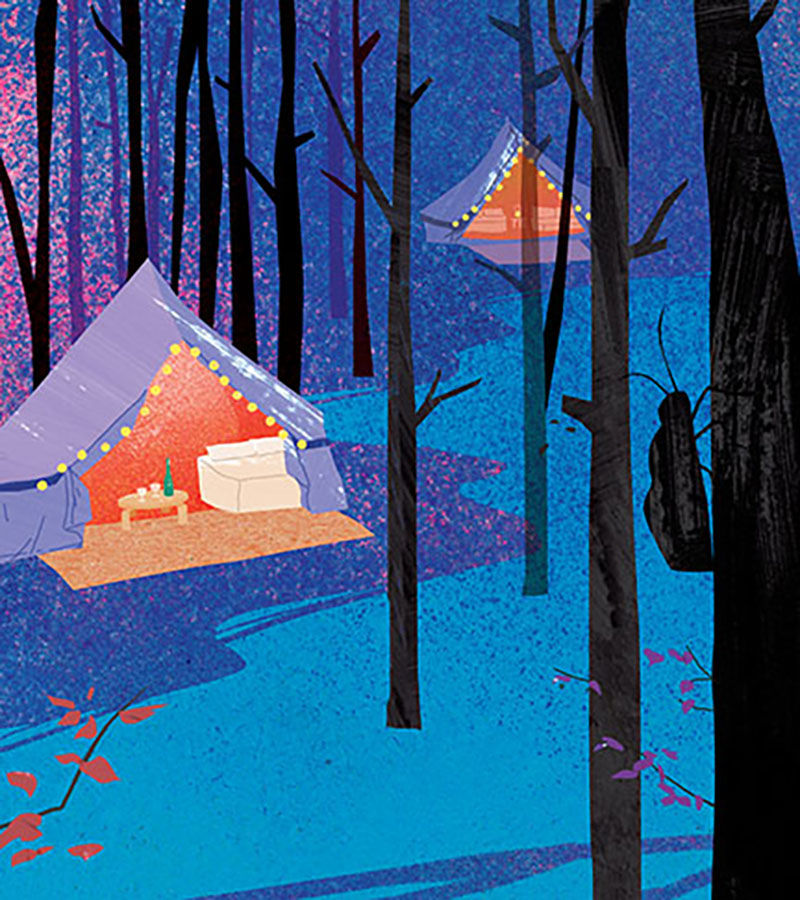 We’d enjoyed, so far, a tiny house nestled in red rocks and an endearingly down-on-its-luck Arizona motel. Two nights of glamping, bookending one hearty day of hiking, were meant to be the grand finale to our road trip, our magnum opus of car travel in the Southwest.

Glamping, or glamour camping, is defined by the Oxford English Dictionary as “a form of camping involving accommodation and facilities more luxurious than those associated with traditional camping.” The website Glamping.com, as definitive a source as they come, describes the practice as “a way to experience the untamed and completely unique parts of the world — without having to sacrifice creature comforts,” while Urban Dictionary defines it as “a lie that dumb hippies tell themselves,” noting that “glamping is not done by usual outdoor types who climb mountains.”

The scorn of more seasoned outdoorsmen and Urban Dictionarists did not bother me. I was eager to cleanse my brain of its usual jumbled contents — of the endless loop of snarky retorts shouted into the Twitter void, of social-media photo captions singing the praises of “my person!” and “this guy!”, of the parade of dead-eyed Teens Experiencing Eighties Rom-Coms and/or Foreign Cuisine for the First Time — if only for 48 hours. And for several hundred dollars a night, the resort assured us, glamping could silence this noise. If technology had broken our minds, two nights under the stars could reset them. A brochure neatly propped up on the nightstand extolled the benefits of “intentional inconveniences” amid dusty photos of happy glampers who were tanned, healthy and in touch with their purest selves, baptized anew in the river of helicopter tours and private yoga classes. “Unplug,” the brochure urged us, “and experience what matters.”

That’s right, I thought. Here in the desert with two of my nearest and dearest friends I would experience what mattered. Together, we would disconnect from the unnatural world and reconnect with ourselves. With womanhood! We’d form a new kinship with our Neanderthal foremothers, subsisting only on two batteries, a shared bathroom and $14 breakfast burritos. I unplugged.

By 2 a.m., I had replugged. Lying in the darkness of our tent, my friends peacefully asleep in their crisp white sheets, I nursed a growing suspicion that glamping was more dangerous than the beaming brochure models let on. The smiley, soft-spoken woman at the front desk had cheerfully reassured us that no, there were not any bears at the site. I wasn’t so sure.

“Do you think bears would be attracted to toothpaste?” I had asked my friends as we prepared for bed. It was the latest in a series of grossly unfounded wildlife concerns I’d brought up throughout the trip. Would an undiscerning bear be able to differentiate between the scent of my peppermint Crest and, say, candy cigarettes?

“Bears do not want your toothpaste,” my outdoorsiest friend said with a tired sigh, her saintlike levels of patience clearly tested.

“Maybe I’ll just keep it in the car anyway,” I’d mumbled, mostly to myself. The conversation had turned away from bears to our families, childhoods and inside jokes, until my friends drifted off to the howls of far-off coyotes and I suddenly found myself more aware than ever of each snap and rustle outside our tent.

Fire extinguisher safely positioned within grabbing distance, I gave into temptation and turned to the familiar glow of my iPhone. I scrolled mindlessly through Facebook, through Instagram, through Twitter; I threw myself with gusto into BuzzFeed quizzes that promised to tell me which shape of pasta I was based on my taste in Target accessories. I skimmed through Yelp reviews of our glampsite, hoping to find some reassurance in the five-star reviews, but found myself fixating instead on one user who claimed to find insect eggs in his bed, shuddering as I remembered the employee’s giggly warning not to stray from the path at night “because of the scorpions.” I did this until the sun came up and then, my brain foggier and noisier than ever, I stumbled to the communal showers to scrub the internet away.

As the sun and temperature rose, my grogginess turned to queasiness and the cliffs around us began to spin, and I sensed that I was about to ruin our grand glamping adventure. I guzzled warm, green-flavored sports drink, ran to the bathroom to unguzzle, then repeated the process three more times. My friends, exchanging worried, maternal glances, bought a coloring book and crayons and ushered me to a bench, where I sat and theatrically groaned. The thought of returning to the glamping tent, to its natural heat and its enragingly mysterious noises, made me lurch to the bathroom again. Nature had broken me. Glamping had won.

I had all but resigned myself to the shameful fate of death by glamp when, upon returning from one particularly unglamorous trip to the restroom, my friends announced that they had a surprise. These friends, these saviors, these angels on earth, had procured for me nature’s greatest gift: a hotel room. I burst into tears, wondering what I had done to deserve such kind souls in my life. My people! These guys!

“This is the nicest thing anybody has ever done for me,” I blubbered as we approached the hotel.

My outdoorsiest friend shrugged. “That’s friendship,” she said. With hugs and air kisses and promises to return for dinner, they deposited me with the coloring book and were on their way.

I slid into the icy-cool sheets, tears of delirious gratitude still trickling down my face, and took in my surroundings: the fluorescent lights, the gentle air-conditioned breeze, the bright green AstroTurf outside my locked window. This, I thought, was real love. Nothing could matter more.