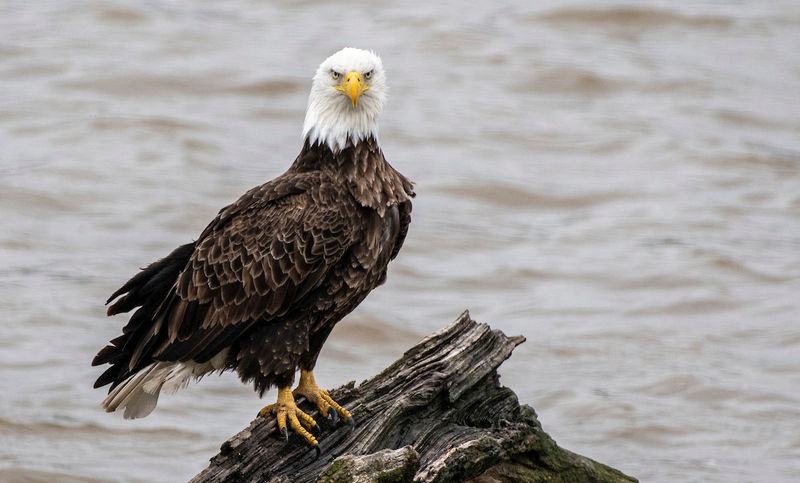 The first time I saw a bald eagle flying over South Bend I was coaching little-kid baseball on the northern edge of town, at a ballpark along the St. Joseph River. I spied it off in the distance — the signature white cap and majestically soaring wings — startling in size and proximity. I was coaching third base and almost called time so we could all watch in communal adoration. Instead, I waved my arms around, pointed to the sky, looked at my wife in the bleachers and went halfway to the dugout to tell my kids. The high-flying eagle made a pass, banked lazily northward and sailed out of sight.

Its presence was so unexpected, and so heavenly, that it felt like a kiss from above, a message in a bottle, a communique from a distant place and past when wild things still ran free. And yet its visit wasn’t totally inconceivable. It’s here that the river runs out of town, and a corridor of woods, fields and marshes follows it toward Michigan forests and farmland and Great Lakes hinterlands, eventually into Canada. The bald eagle was perhaps exploring southward.

About five years later, in the spring of 2015, a pair of bald eagles assumed ownership of a red-tailed hawk’s nest a couple of miles north of the ballfield. The nest is high in the treetops at St. Patrick’s County Park, almost 400 acres of woods and fields hugging the banks of the St. Joseph River. There are houses nearby, subdivisions and high school athletic fields. The aerie, one of only two successful bald eagle nests recorded in county history, is doubly protected by its position within Notre Dame’s Linked Experimental Ecosystem Facility (ND-LEEF), a plot about the size of two football fields within the park itself.

ND-LEEF is a man-made network of ponds, streams, wetlands and watersheds that allows for scientific research in a controlled system that mimics nature and fosters care of the environment. The large nest and regally erect eagles can be readily seen, and an “eagle cam” provides constant observation of the pair at home in South Bend. Their annual spring delivery of new bald eagles into the world, from egg-laying to feeding of young to those initial, awkward attempts at flight, gets a loyal viewership.

The human eye provides less-intimate but equally mesmerizing images of the wild eagles. Two come to mind — one fleeting and one that had us staring skyward until our necks ached. We stopped a volleyball game to watch the magnificent bird soar and float, circle and hover, just play on the wind, riding high. Beauty and grace and sublimity.

The other sighting happened fast, but thrilled me with its speed and immediacy — the eagle low on the water, running fast the length of the river, its wings stroking rapid and strong, white head fixed forward. I happened to be at the water’s edge just then — so close to an eagle flying. Quicksilver moment, then gone.

They can travel 40 miles per hour in flight, reach speeds of 100 miles per hour when diving for prey. They can spot fish underwater from two miles away. Impossible to humanly fathom. In the spring, when feeding young, with their catch flopped into the nest, the fishing skills are apparent. And mightily impressive.

One summer a year or two ago we found ourselves at a zoo about 1,000 miles from home, looking at a bald eagle perched in a cage. It didn’t look the same as what I knew as “bald eagle.” It was then I heard a woman explaining to an acquaintance that where she’s from there are wild eagles — wild bald eagles — living in a park down the street. “And where is that?” her companion asked. “South Bend, Indiana,” was the answer.

That made my hometown sound very cool.