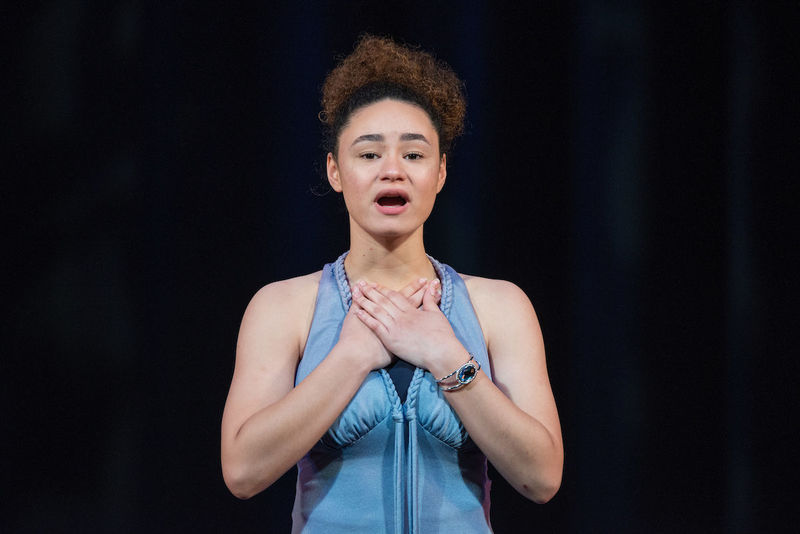 Precious Parker needed to be persuaded. The idea of performing Shakespeare, whoever that was, did not interest her.

She liked her elementary school drama classes well enough. Christy Burgess, the Shakespeare outreach director from the Robinson Community Learning Center, teaches the classes as part of an arts-education program in the South Bend schools. At Perley, just across Eddy Street from the Robinson Center, Burgess started encouraging Precious as early as second grade to join the Shakespeare ensemble.

Burgess tried show-and-tell. Pictures. An endless phone album that, scrolled fast enough, could serve as a childhood time-lapse for several longtime members of the Robinson Shakespeare Company. Among them were neighbors of Precious, familiar faces if not close friends, older kids in costume, on stage, at play.

The subject of her foot-dragging arrival at the Robinson Shakespeare Company has become almost a routine in itself between Precious and Burgess. During rehearsals for Cymbeline, the conversation turned one evening to the cast’s origin stories, with Burgess prompting early-days memories from the actors. 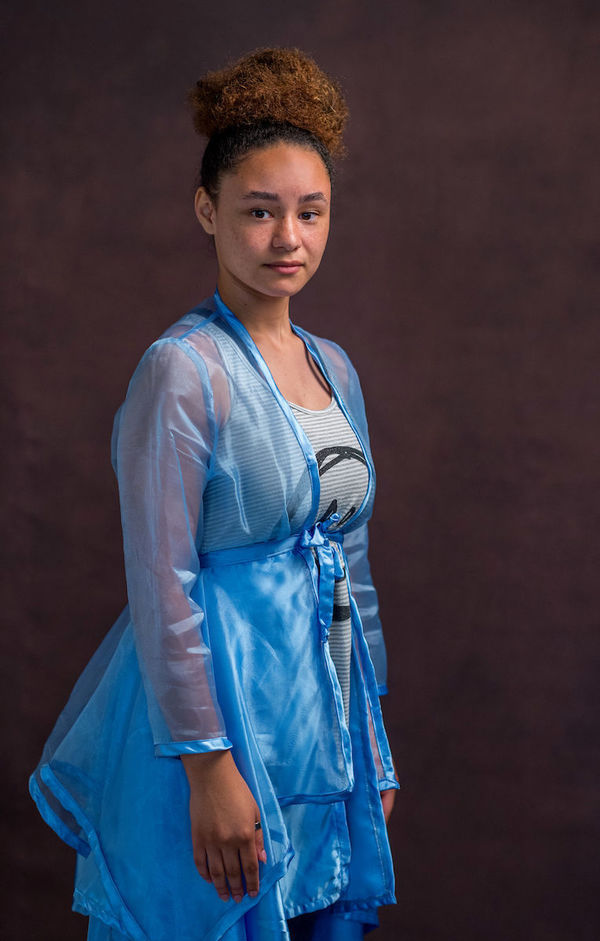 To express Imogen's anger and despair, Precious Parker learned to play the part with vulnerability as well as strength. Photo by Barbara Johnston.

“Precious, how did you start out?”

“How long is a while, Precious?”

If anything, it’s a low estimate. Precious, who’s now a 15-year-old incoming high school junior, finally showed up the summer before her freshman year.

She was lost. They were performing Love’s Labour’s Lost and the language bewildered her. A third-grader in the company explained what was happening.

“I was like, ‘How do you know this?’” Precious says. “It just blew me away how mature everyone was.”

And how welcoming. She expected that assimilating into the ensemble’s established group dynamics would be at least as mystifying as anything in Shakespeare.

Instead, “they just really took me in as if they’d known me for years,” Precious says, giving her that most treasured of adolescent gifts: “I could be myself.”

Self-expression and self-discovery are the paradoxical points of all this pretending to be someone else. At the time she joined, Precious was dealing with what she calls “family issues and self issues,” clouds over her life that darkened her spirit.

“I didn’t feel like I lived for anything,” she says, and what Burgess and the Robinson Shakespeare Company provided turned out to be more than an extracurricular diversion. They became the light in her life.

Burgess offered a sympathetic ear and a guiding vision in a brighter direction. She helped Precious shrug off things that once pointed her toward despair.

“I still take it in, but not as much as I used to. I know how to deal with more things,” Precious says. “I don’t know how to explain it, but she really did help me.”

To help her become a better actor — swift progress as measured in the size of roles — Burgess challenges Precious to tap into a side of herself she’s inclined to conceal.

“I think with Precious, she’s very good at ‘I’m being strong,’ but she’s less good at ‘I'm being vulnerable,’” Burgess says.

With a leading role as Imogen in Cymbeline, Precious needs to be both, suffering the injustice of a banished husband and the heartbreak of that lost love, while steeling herself against the pressure to marry an unwanted suitor.

Finding the right emotional balance was “bumpy” at first. She had to resist the temptation to confuse higher volume with force.

There’s a scene with Cloten, the pushy, unworthy rival for her affections, where Precious felt an instinct to lash out at him. Imogen, the daughter of the king, has a restrained bearing, sure enough of herself and her status to belittle him without raising her voice.

To portray that truthfully requires more than adjusting the tone of voice. It’s internal, based on an intimate knowledge of the character’s personality and humanity, not just the words and how to say them.

When Cloten sputters and fumes that he’ll inform Imogen’s father of her insolent refusal of his advances, her shrugging, “Your mother too,” burns more as dismissive understatement than angry exclamation.

“Watching her go through that journey and then find it,” Burgess says, “she’s had such beautiful moments on stage.”

The real beauty, to hear Precious tell it, has happened off stage. As she reminisced at that rehearsal, she tried to put into words for Burgess what the ensemble’s support has meant to her since she finally made her way to it.

“It lights something inside of me. It changed me a lot. And I really do thank you for bringing me in here, so . . .” Precious trails off into self-conscious laughter, but Burgess can read between the ellipses.

“It was worth every rejection.”