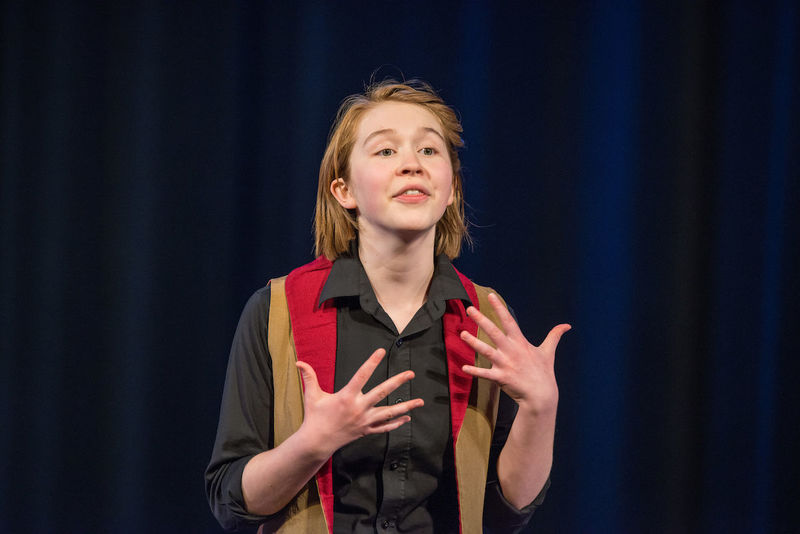 Editor’s note: The 6th through 12th graders of the Robinson Shakespeare Company, part of Notre Dame’s Robinson Community Learning Center, performed Cymbeline this summer in Stratford-upon-Avon and participated in a workshop at Shakespeare’s Globe in London. Notre Dame Magazine reports on their journey here.

Ophelia Emmons is named after the Ophelia, of Denmark, so Ophelia of Indiana’s place on the Shakespearean stage seems like a matter of destiny. She rejects any stars-aligning interpretation.

Here’s how it happened. Ophelia found out about the Robinson Shakespeare Company by chance — some might call it fate — when her mom took a pottery class with the director, Christy Burgess.

“My mom mentioned me to Miss Christy, and she was like, ‘Oh my gosh, she has to do Shakespeare. She’s born for it,’” an assertion that rang more true to mother than daughter.

“I’m not born for it,” Ophelia says, all performances to the contrary. 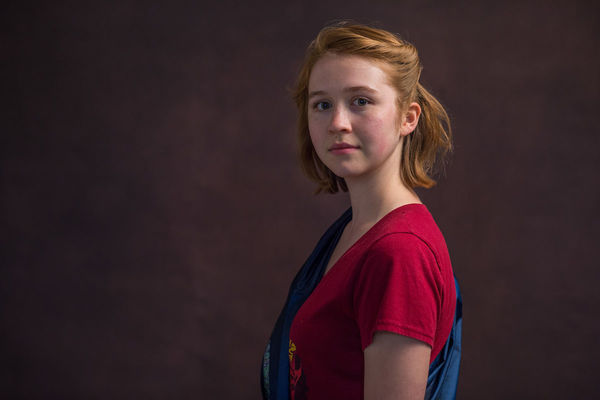 This was three or four years ago, at a tough time in Ophelia’s life. She was 12 or 13 then, coming off of a difficult year in school, feeling depressed, struggling with an eating disorder. Those circumstances made the opportunity the ensemble presented all the more important to her mom. She thought a new environment and creative outlet would be good for Ophelia, who was dubious but willing to try.

“So I went, and I am still painfully shy. And I didn’t know any of these people,” Ophelia says. “I’d never acted in my life, and I’d never read Shakespeare in my life.”

All of which undermines her case that this wasn’t meant to be. Because her lack of experience and familiarity with the material have been minimal obstacles indeed.

Ophelia’s acclimation to the stage happened in the time it took to utter a few lines in a small part. Just doing that, something she felt sure she lacked the constitution to achieve, was enough to alter her sense of self.

“I just did not believe that I could even get up on stage and, like, say words. You know?” Ophelia says. “And I did, and I was kind of shocked afterwards.”

Those were gateway words. They led her to the Robinson Center’s summer Shakespeare camp, then a monologue competition (second place, first try), one personal hurdle after another cleared.

Not without jangling nerves and an intensive regimen to overcome them, however. Shakespeare’s words can occupy the minds of actors in an invasive way that inhibits spontaneous performance. They’re in their heads, not in the moment.

Director Burgess has methods of redirecting attention. She’ll have actors run up and down the hallway, then recite their monologues huffing and puffing. Or instruct performers to resist as ensemble members try to drag them from the room, the physical strain superseding the mental burden as they deliver their lines.

“When you are given a distraction like running and then having to breathe and go, or when you’re actively being pulled out of the room,” Burgess says, “you have to fight and you forget that censorship of yourself.”

Those techniques helped Ophelia overcome her early performance anxiety to the point that, before her first monologue competition, she was able to say, “I’m not even nervous” with clear eyes that assured Burgess even more than her words.

“Then I was given the role of Tybalt in Romeo and Juliet, and I got to sword fight,” Ophelia says. “I got to yell at people and get up in their face and just be completely ridiculous.”

That part felt so freeing that she doesn’t remember much about the performances,

“It was so magical, and I think it just allowed me to be a person that I never thought of myself as,” she says. “You know, powerful and arrogant and over the top.”

Capable of accessing those unknown parts of herself to bring a character beyond portrayal, to life. Her role in Cymbeline demands those skills to call upon very different qualities than Tybalt’s.

She didn’t want the part of Posthumus Leonatus. Nobody really did, but Burgess cast Ophelia for the “wealth and depth of emotion” she could offer.

Just the name — referring to his father’s premature death, a casualty of war, and the proud title given to him in battle — betrays the orphaned son’s shadowed identity. King Cymbeline takes pity on young Posthumus and raises him at court but never sees him as worthy of royal status.

When Posthumus marries the king’s daughter, Imogen, he’s banished to Rome, rejected as unfit for her hand. The circumstances of his life leave Posthumus rootless and jealous, his insecurity recurring and subsiding like an itch.

“When you look at the fact that he is an orphan and he was raised in this place where he never really felt like he belonged, does not feel like he deserves Imogen,” Burgess says, “there has to be a humanity and a vulnerability that you bring to that.”

At first, Ophelia found Posthumus off-putting, his contradictory qualities a challenge to accept. On the one hand, he’s Imogen’s true love, worthy in her eyes at least and wronged in his banishment, even if the king refuses to see it that way. In the next breath, Posthumus is “impulsive and he’s reckless,” Ophelia says, “and he says and does the wrong things.”

The part also allows her to deliver one of her favorite lines ever, when Posthumus chooses forgiveness over vengeance toward the perpetrator of a terrible wrong. “‘Go and deal with others better.’ I love that line,” she says.

Ophelia has come to realize the character is “very human,” equally capable of good and bad, a role requiring actors to confront their own contradictions to understand his motivations.

“It can be hard to allow yourself to be Posthumus sometimes,” she says, “and to see, like, I have all the capabilities of Posthumus inside of me.”

Playing the part at all is a testament to the capabilities that performing Shakespeare has allowed Ophelia to find within herself.