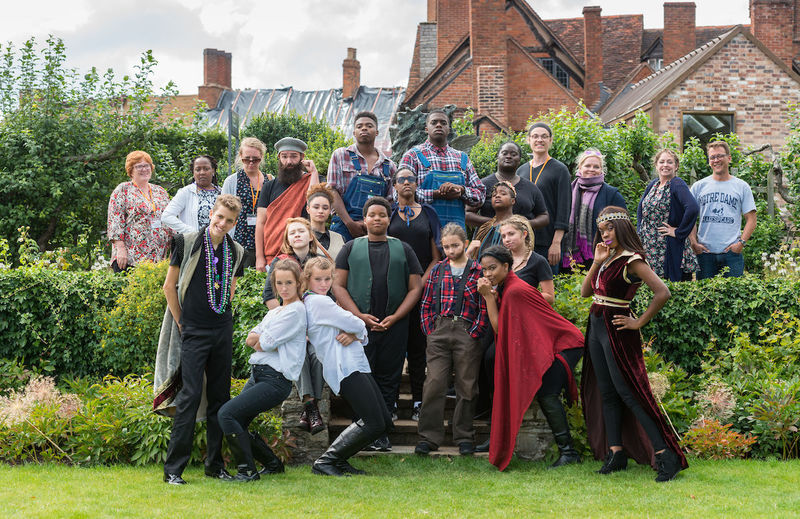 The threat of rain hung low over the Robinson Shakespeare Company’s two shows scheduled for Sunday afternoon in the Great Garden of Shakespeare’s New Place in Stratford-upon-Avon, England. Such a forecast tends not to be subject to the wishful intervention of visitors, but this enchanted ensemble’s entreaty triumphed.

A few drops fell early in their first performance of Cymbeline, then the clouds parted and sunshine saturated their grass stage’s natural scenery. Not that the challenges of staging a play on the grounds where William Shakespeare once lived evaporated under blue skies.

There’s a lot to see here. Capturing the undivided attention of people passing through required an even more intricate bewitching of nature than a sun dance. The actors had to create a new world so engrossing that the statues and the plants and the exhibits — and the scents wafting from the coffee cart — would disappear.

An ebb and flow of people came and went, but a knot of maybe 20 or 25 remained rooted in their spots, several even lingering to thank the Robinson players for their performance. Afterward the actors were especially proud to have noticed spellbound young children either begging their parents not to leave, or taking slow, reluctant steps away, eyes fixed on the action, departing under food-dragging protest.

The kids must have sensed something that only those who had seen the Robinson ensemble’s Cymbeline before would have known. On Stratford soil, in the soft rain and sunshine, the company’s performance flowered into their most natural yet, a living thing drawing nourishment from the setting.

It built to the final scene when Ophelia Emmons expressed the loss and regret of her character Posthumus with shuddering tears she had never before shed on stage. In one way, Ophelia seemed to be representing the entire cast, releasing the pent-up emotion — the excitement, the anxiety, the gratitude — that their journey to England had welled up within them. In another way, the moment epitomized a performance so fully realized that, on stage, the actors were conscious only of the experience of their characters.

Toward the end, a strong wind started blowing and a smattering of rain returned. This time, though, as if on cue. Joe Russo strummed his guitar and Kennedi Bridges sang the closing song with the breeze rustling the trees like a rehearsed accompaniment, the weather not just cooperating but participating, absorbing the ensemble into the Stratford atmosphere.

“How hard it is to hide the sparks of nature,” Lizzie Graff’s character Belarius says, and under Sunday’s conjured sun the members of the Robinson Shakespeare Company revealed theirs, blooming like native plants on Shakespeare’s land.