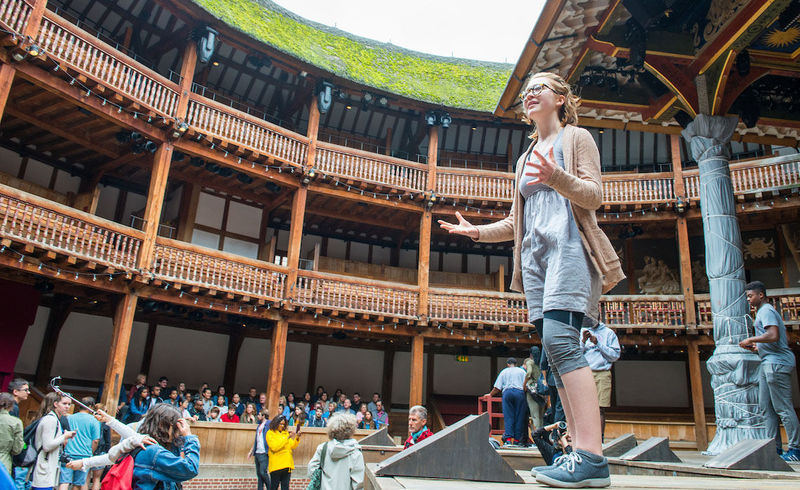 For an hour Thursday morning, the stage at the Globe Theatre in London belonged to the Robinson Shakespeare Company.

They walked from backstage into natural light streaming through the open roof. They took in the view across the concrete “yard” where the groundlings stand for performances, up through three tiers of seating, past the slanted thatch into blue sky. The same view that the actors originating Shakespeare’s most famous roles would have seen.

The Robinson ensemble members were special guests. Hence their elevated vantage above and beyond the access of most tour groups. 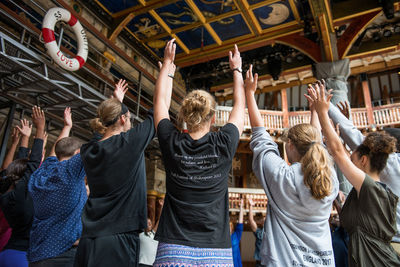 All hail Glynn MacDonald, Master of Movement. (Not the actual exercise, but the Robinson Shakespeare Company's sentiment.) Photo by Barbara Johnston.

Leading their stride onto the stage with the resonant beat of a drum was Glynn MacDonald, the Globe’s Master of Movement and a figure of veneration among those who encounter her.

MacDonald has worked with every actor who’s trod the Globe’s oak boards since American actor and director Sam Wanamaker’s vision for a living tribute to Shakespeare opened in 1997. And now she’s worked with this wide-eyed youth acting troupe from South Bend, Indiana.

The Globe puts unusual physical demands on actors and creates an especially intimate relationship with the audience. As many as 500 people stand in the space in front of the five-foot-high stage, pressing in on three sides, with another 1,000 in the seats that arc around the outer edge of the structure. Everybody is within about 40 feet of the stage, but few have a straight on perspective of the performance.

Actors, then, must radiate in all directions from the stage hub at the center of “the Wooden O,” as the Globe was often called during Shakespeare’s time — including by Shakespeare himself in the prologue to Henry V.

MacDonald oriented the Robinson players in the iconic surroundings and put them through routines to develop spatial awareness and assume powerful stage presence and projection. They galloped like horses and twirled like tops. They shot imaginary arrows toward distant targets. They strode eye-to-eye with a partner, their bond with their fellow ensemble members evident to the trained eye on them.

Saucing her instruction with posh “darlings” and salting it with the occasional coarse interjection generally rendered with asterisks in print, she charmed and awed the ensemble.

MacDonald reciprocated the appreciation. This can be stated with certainty because she said so — “It’s my joy now to watch you lot because you’re going to keep Shakespeare alive” — and she wastes no breath on insincerity.

“If she thought you were crap,” Bellwood said with a laugh, “she would have told you right off the bat.”

Instead she opened her heart to them, and more of her repertoire than she usually divulges to visitors. MacDonald gave the Robinson players the best of herself and they embraced it — literally during one exercise.

To embody love on stage, they had to depict the flinging open of closed hearts. She demonstrated the steps with the Robinson ensemble’s Monica Caponigro, ending with a hug. 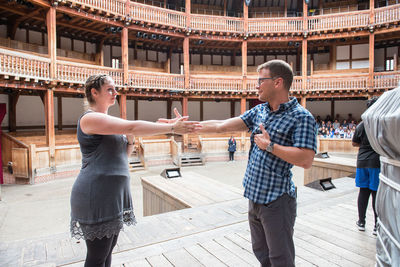 A moment to savor for Christy Burgess and Scott Jackson. Photo by Barbara Johnston.

“Someone to love,” MacDonald said to Monica as they separated. “That’s all we need.”

Then the Robinson players set about discovering and displaying that love among themselves. They drifted around the stage — the Globe stage, a lightning bolt of recognition that struck now and again as their footsteps echoed on the wood — and found each other.

Arms and hearts opening, they hugged one after another. As it went on, the moment seemed to take on more significance than just an acting exercise. The magnificence of the instructor, the setting and, especially, the love they already felt for each other, the relationship that made them more than just another acting company, that got them here, together, was unspoken but palpable.

Christy Burgess, the Robinson Shakespeare Company’s founding director and prime mover in its decade-long maturation into an ensemble worthy of international invitations, let the feelings overflow with everyone who crossed her path. Among them was her husband, Scott Jackson, the executive director of Shakespeare at Notre Dame.

They lingered longer than the rest in their embrace on the Globe stage, letting go only to wipe away tears.