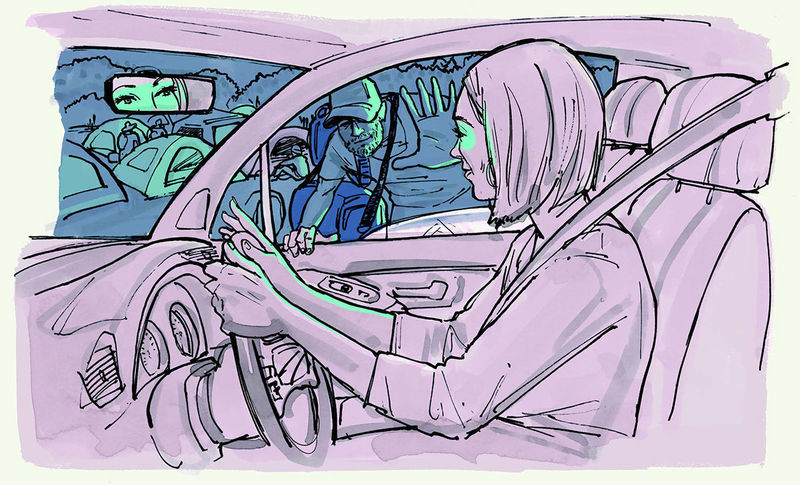 Will he hurt me? Should I call someone? Will there be a story on the news about me tomorrow? This was a stupid choice, Mikaela.

These thoughts anxiously flew through my mind as I drove north up Interstate 25 in Denver. My red Mazda blended into the sea of commuting cars as the sun stretched shadows across the highway. No one driving by would have any idea that the man in my passenger seat was a complete stranger, nor that I had just picked him up from the sidewalk of the on-ramp.

What were you taught about helping those in need, specifically those who are homeless? This question follows me all the time — in my thoughts and conversations and when I’m running down Alameda Avenue. My father told me to donate to shelters and never give money to individuals. I have a friend who always gives money to someone who asks. Another friend carries gift cards, and a co-worker creates little bags of snacks and toothbrushes.

These actions feel both satisfactory and woefully inadequate. The half-true echo of “I’m only one person” hangs heavy in them. I’m in constant pursuit of an answer that will make me feel good and cozy, like a pat on the back from someone who loves you. But maybe that’s not the point. It’s not about me feeling good.

In the moments before and after seeing someone who’s asking for money, for help, for a moment, for love, I think about Jesus. It’s easy to pretend that modern life is somehow more complicated than the towns Jesus traveled through. I don’t have time. I don’t have enough money. I’m so busy. I’m only one person. The excuses are exactly that: excuses. They are reflexes learned and developed to fend off guilt. Jesus was extremely busy, and he had hundreds of people following him who were filled with love and hate. My life is far less complicated. I don’t have a lot, but I have enough money, and I’ve given hours to an endless YouTube drain, so I have time. I know I’m not God, but I have time.

“Hi! I need to go north to the park, are you headed that way?” I didn’t want to lie, and I was headed exactly that way. My route home would drive right by the park on Colfax.

Still, I didn’t expect myself to say, “Yeah, do you need a ride?” Maybe it was because we were making intense eye contact or because I watched the driver in front of me pretend the man wasn’t there that those words came out of my mouth.

I immediately wished he was a woman. He was tall, and he was carrying a bag. His accent reminded me of someone I had worked with from Ukraine. My spine stretched out, making me slightly taller, and my pulse changed from a waltz to the bachata. I asked him if he could show me his bag, and immediately I apologized. Uber drivers don’t make me show them my bag. I could blame Ted Bundy for my uneasiness — or the sustained bad idea, bad idea, bad idea mantra vibrating through every part of me.

Inside his bag was a change of clothes and a Bible. Now I really felt guilty. He was carrying God’s words, and I was stripping away parts of his dignity with my distrust. He didn’t judge me for asking. Other drivers waiting to enter the highway watched as this man stepped off the sidewalk and got into my car. I wondered if anyone thought I knew this man, or that the pickup was planned. I half hoped someone would follow me, just to make sure everything was OK. I half hoped he wouldn’t get in the car. I felt guilty for hoping that. I felt guilty for thinking this man was guilty of something. Maybe he was Jesus.

His name was Peter. After I introduced myself, he shared that he was from Russia but had moved to New York when he was a kid. I know he told me how he ended up homeless, but now the details are mixed with other stories. I think he’d been living with a brother who was arrested, and then Peter was evicted from their home. He packed a bag and started traveling, using public transportation and reaching out to friends. Denver was far away from the last of his out-of-New York friends, and he’d been on his own for a while. He wasn’t sure what he was looking for, and it was hard to get work when he didn’t have an address to put down on applications, but he said it felt better owning nothing than relying on material things. I touched my phone and thought about all the things I rely on.

I told him I was a teacher, and he was impressed. “Being a teacher is really challenging work, but you still look like a kid!” he said, and I laughed. The more we talked, the quieter my internal monologue — calling Peter dangerous, or berating me for inviting him into my car — became. I wasn’t relaxed, but I was listening, and he was listening to me. To the drivers buzzing by us, we may have looked more like old friends reuniting, or maybe even like people on a first date, than like strangers. At one point I felt him watching me, and my grip on the steering wheel tightened.

I asked Peter about the Bible. He wasn’t Catholic; he was Christian. He liked reading the words of the Bible because they are full of hope. He asked me if I had a favorite verse. “Yes. ‘I can do all things through Christ who strengthens me,’” I said. It seemed like a very apt passage for the moment.

We both took a deep breath in. I thought about Jesus. Maybe Peter would pull bread from his bag and we’d break it together. Instead, I broke the silence by asking if he spoke Russian. I didn’t know very much, but a good friend had taught me how to say, “Help me, please!”

“Let’s hear it!” He was excited, and his eyes grew wide. I was excited, too. I stumbled through an enthusiastic Pohmagutye minye pojousta, which I can only guess sounded like a child speaking underwater, but Peter clapped when I finished. He asked if I spoke any other languages. Soon he was showing off his Spanish skills, and I was sharing what little knowledge of Russian I had. I shared that my father had come to the United States from Cuba as a kid, and Peter said how hard it is to leave a place you know.

The ride lasted 20 minutes, and we’d spent 19 of those minutes talking. I parked next to the big grass field where many other men and women were setting up tents for the night.

Who needed God more? I felt like the one lacking faith, relying on material things to be happy. He opened the door and gathered his bag to leave, but I hesitated as I tried to remember how to say goodbye in Russian, and I called him back.

“Dasvidaniya?” The question in my voice was clear as I half mumbled the phrase. Peter turned back and smiled, “Yes. Dasvidaniya.” He closed the door and waved to me. I sat for a moment, watching as he weaved through the groups of people and then disappeared. I wondered how many people he had met and how many had made him show them his bag. Maybe I was the only one. I wondered if he would talk about our car ride with anyone. I wondered again, who needed God more?

Peter reminded me that the uncomplicated act of sitting with someone and sharing stories is an act of radical love. Yes, we need money and time, but more than anything in this country, I think we need more radical lovers. I’m working on that.

Mikaela Prego’s essay is one of three second-place winners of the 2020 Young Alumni Essay Contest. Prego is a 4th grade teacher at Nativity Preparatory School and lives in Boston.