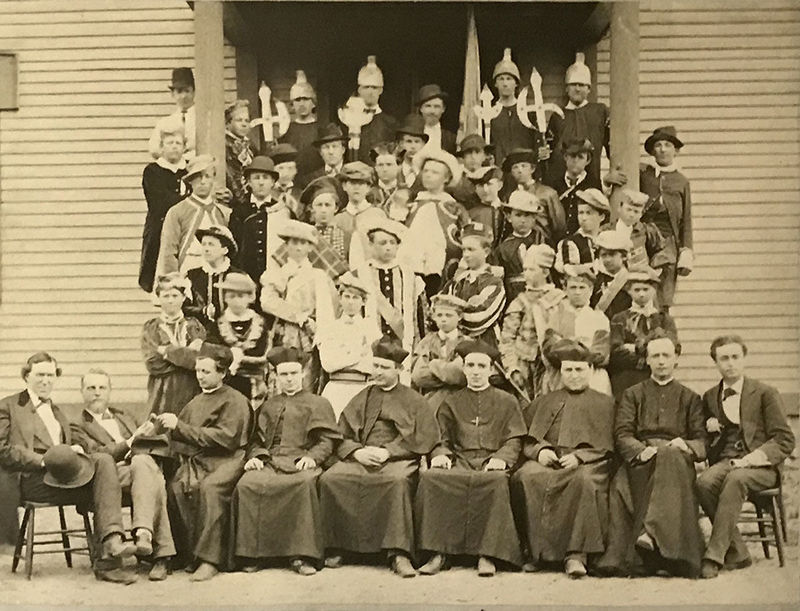 Professor J.A. Lyons, seated at far left, and the cast of the 1876 production of Henry IV. (University of Notre Dame Archives)

Silver swords used in Shakespearean battle scenes hang a few feet away from a luxurious golden brocade gown worn by the pregnant Hermione in a 2015 production of A Winter’s Tale. Nearby are Puck’s rocket pack from a steampunk-inspired touring company’s production of A Midsummer Night’s Dream (2012) and a ship’s wheel from The Tempest (2016).

Costumes worn by Ariel and other characters in that production of The Tempest are displayed on mannequins, available for closeup viewing by visitors. The figures are poised atop a shimmering pile of blue-gold organza representing the sea.

It’s all part of a new exhibit, Full Circle: Shakespearean Culture at the University of Notre Dame, that continues through September 6, 2021 at The History Museum in South Bend.

“It’s the most visually impactful Notre Dame exhibit we’ve had,” says Kristi Kuntzman, the museum’s registrar and curator of the exhibit. 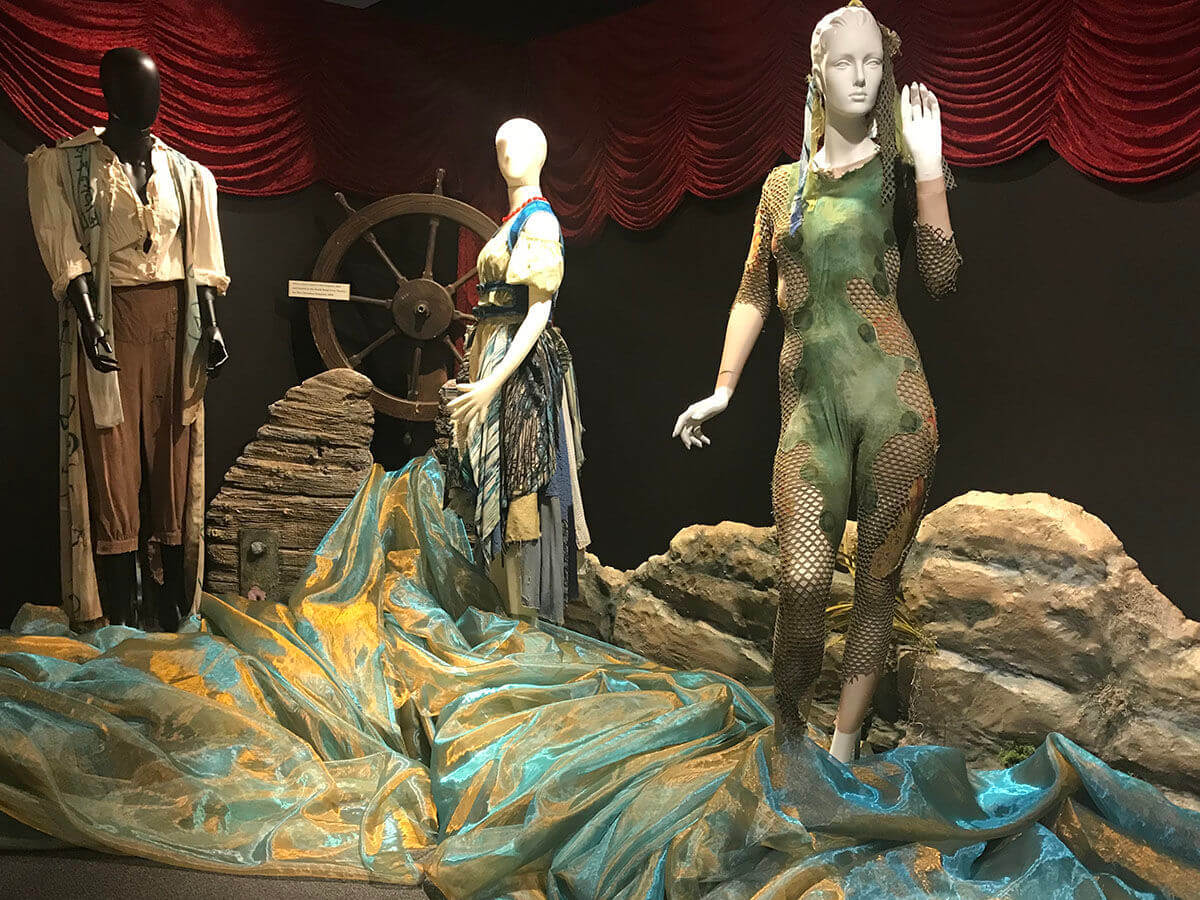 More than a dozen costumes were selected, with five (mostly from The Tempest) currently on view. The others will be rotated into the display over the course of its two-year run. Some of the set pieces on display will change too. Visitors get a full sense of the creative labor involved in costuming a play, from fabric swatches to concept renderings to finished garments.

In its current format, the exhibit also includes a case featuring battle axes, daggers and bayonets. The replica World War II-era bayonets served as sidearm daggers for soldiers in a 2012 production of Hamlet.

The exhibit showcases the history of Shakespeare performances at Notre Dame, which go back nearly to the University’s beginning. In 1847, five years after the Rev. Edward A. Sorin, CSC, founded the school, scenes from Henry IV, Part One were included in the commencement ceremony. Performances from Shakespeare plays were repeated often during commencements until, by 1884, the inclusion of scenes became so standard that it was referred to as “the annual Shakespeare entertainment.” 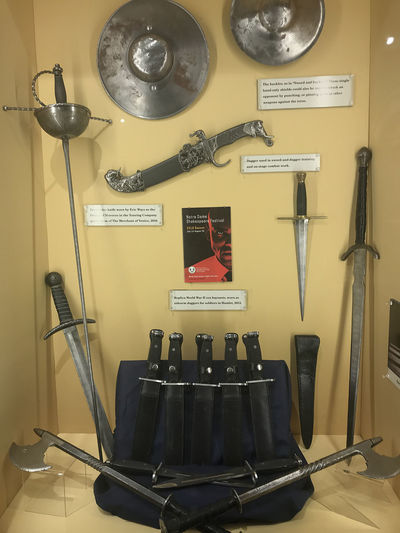 Shakespeare performances were common on American college campuses in the 19th century, “but there are few that I’ve ever encountered in such sheer numbers (as Notre Dame),” says Grant Mudge, the Ryan Producing Artistic Director of the Notre Dame Shakespeare Festival. He worked with Kuntzman in planning the exhibit.

A vintage photograph shows Professor J.A. Lyons and the cast of the 1876 Notre Dame production of Henry IV. It’s the oldest surviving photo of a Shakespeare cast on campus. Lyons taught from 1862 to 1888 and led many of the campus Shakespeare productions. From 1847 to 1943, Notre Dame staged at least 53 Shakespeare plays.

The frequency of Shakespeare productions on campus may have been because the scripts were widely available and easily copied, Mudge says. “There were very few women’s roles, and they were easily cut,” he adds, which might have been an important point on the all-male campus of that era.

Early Catholics on the American frontier may have identified with the challenges facing the playwright’s characters, Mudge says, and Holy Cross priests and faculty members likely found the plays’ lessons morally instructive to the student body.

The exhibit leads up to the present day. Today’s Notre Dame Shakespeare Festival grew out of a course created in 1989 by professor Paul Rathburn. The festival has been producing theatrical events since 2000, with a production of A Midsummer Night’s Dream planned for 2020.

The festival has helped connect students and community residents to the life lessons to be learned in Shakespeare’s works, and it also has broadened Notre Dame’s international reputation beyond academics and football to include this annual arts tradition.

As Kuntzman puts it, “Shakespeare has helped Notre Dame connect with the world.”