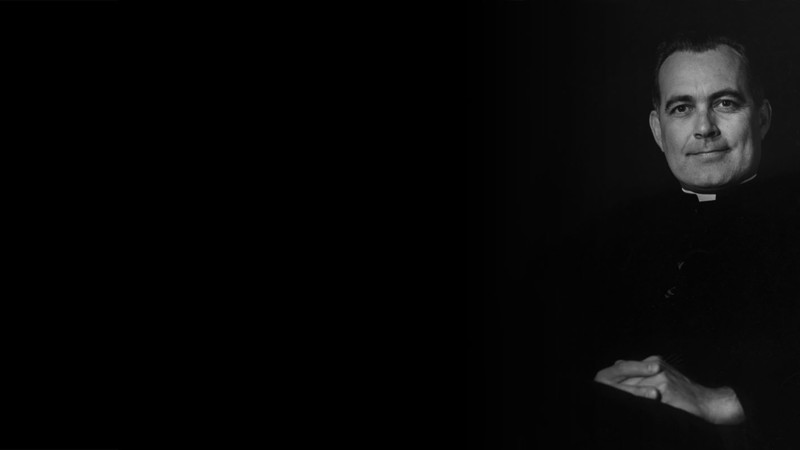 Editor’s note: In commemoration of the anniversary of the death of Father Theodore M. Hesburgh, CSC, on February 26, 2015, Notre Dame Magazine is publishing selections from our Hesburgh Special Edition here at magazine.nd.edu. We will publish one piece per weekday through Wednesday, March 2. Print copies of the special edition are available; please visit our store for ordering information.

I’ve had my director’s comments down pat for two weeks. Bruce Harlan, the University’s longtime photographer, has set the lights for a soft, flattering look, and he has positioned his 16mm film camera to emphasize the presidential stature of our subject. The sound tech is ready to adjust the microphones’ final positions when the night-owl priest shows up.

On schedule, as the Sacred Heart bells toll 2 a.m., Father Theodore Hesburgh, CSC, walks back into his office. 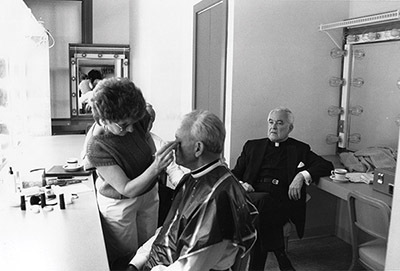 After quick, cordial greetings, I show him the set-up and ask him to take his seat behind his desk. Bruce practices a slow zoom-in, as I tell Father Hesburgh that the scene will start as a medium shot, then move in to a close-up of his face as he speaks. After the usual filmmaker’s instructions, I say, “Okay, let’s start with your first statement: the premise statement that comes right after the film’s opening montage.”

He looks at me a bit quizzically. “Andy, what is it you want me to say?”

“What I put in my memo, Father: define the ethos of Notre Dame, in your own words, in 60 seconds or less.”

He hesitates a beat, glares at me, then WHAM! He slams his fist on his desk. “I am so damned sick and tired of you media people wanting all the world’s wisdom in 60 seconds or less!” He shoves his chair back, wheels around, bolts up and walks out of his office.

I about freak out. After all, tonight’s shoot is a big deal, a very big deal. Father Hesburgh’s statements will open and close the multimedia production that the Development Department pros are calling the “core communication” for the Campaign for Notre Dame, a 1970s-era fundraising effort seeking $130 million. My goal is to capture and convey in an engaging way the ever-advancing vision of the University and, of course, to help inspire the Notre Dame family to make the next advances possible.

My concept is a multimedia documentary: three screens, with slides on all three, plus film on the center — using computer-controlled dissolves between 10 projectors. The use of this leading-edge approach is even riskier because, instead of having the normal six months to produce this complex show, we have 60 days. It must be ready for the first prospective major donors coming to campus soon.

The only thing that makes meeting the deadline possible is Richard W. Conklin, then head of Notre Dame’s Information Services. Dick has conveyed to me the campaign strategy and messages, insights about the University’s voice and tone, plus the script tweaking that sets the writing at a level far above mine alone. I have had no committees to work with; Dick has been my sole contact and collaborator.

It is the third member of our team, photographer Harlan, who tells me right after Father Hesburgh has stormed out: “Don’t worry, he’s not ticked off at you. I could tell when he walked in that he’s on edge about something tonight. Really, I know him. Don’t sweat it. He’ll be back.”

Just before the bells bong for 2:15, Father Hesburgh walks back in, smiles and says, “Okay, let’s do it.” He takes his seat. Before I can repeat my basic directions, he says, “Okay, Andy, tell me again, what is it you want?” Hmmm. How to handle this now?

Well, what the heck — I had learned long ago that the truth will out, a smile works wonders to defuse tense situations, and that I need to make absolutely sure I get what the film has to have. So I smile and kind of chuckle: “Father, the definition of the ethos of the University of Notre Dame, in your own words, in 60 seconds or less. Roll sound and camera. Action.”

He rivets his eyes on the lens, pauses a beat, smiles slightly, then starts :

Notre Dame can and must be a crossroads where all the vital
intellectual currents of our time meet in dialogue, where the
great issues of the Church and the world today are plumbed
to their depths, where every sincere inquirer is welcomed and
listened to and respected by a serious consideration of what
he has to say about his belief or unbelief, his certainty or
uncertainty; where differences of culture and religion and
conviction can co-exist with friendship, civility, hospitality,
respect and even love; a place where the endless conversation
is harbored and not foreclosed.

One take. No edits. 45 seconds. And his statement — which becomes a kind of iconic Hesburgh quote on the nature of Notre Dame as a Catholic university — includes a short phrase that I had hoped would become, not only the title for the program, but as timeless as Father Sorin’s vision statement. In Father Hesburgh’s own words, “The Endless Conversation.”

Thirty-five years go by. It is March of 2009. University President Father John Jenkins, CSC, announces that President Barack Obama will be the University’s commencement speaker in May. My email inbox fills up with questions and complaints, from “What do you think?” inquiries to “Notre Dame has lost me” diatribes.

Despite my right-to-life position and no matter how persuasive I try to be, I can’t get through to any of the naysayers when I talk about the value of having a U.S. president on campus for some dialogue. Then I remember Father Hesburgh’s “Endless Conversation” statement. So I print out business-card-size copies and give them to people who ask my opinion. The impact is amazing. Even the angriest diatribers see another side. They get it. More than a few say, “I hadn’t thought of it that way.”

It also hits me that the statement would be perfect for the president of the United States to use in his address, and some grads encourage me to get it to President Obama, which I could do through a friend who’s wired to Rahm Emanuel. But I don’t consider it mine to give. So I send it to Father Jenkins and a few other ND honchos. I explain the positive effect it has been having on alumni and friends and that I think it would be ideal for President Obama to use — the first African-American president speaking at the school of the civil rights champion and quoting its former president.

Father Jenkins replies immediately, asking me to verify the quote. I do, and never hear another word until . . .

Two months pass. It is Sunday, May 17, 2009. I watch commencement being streamed live on a computer in my office — and I am welling up at how proud I am watching President Obama praising Notre Dame, noting how significant and good our University is for the world. Then he quotes an excerpt from Father Hesburgh’s “Endless Conversation” statement from that night 35 years ago. And tears break loose when I see the reaction shot of the audience, zooming in to a close-up of the night-owl priest, listening along with the rest of the world.

The endless conversation lives on.