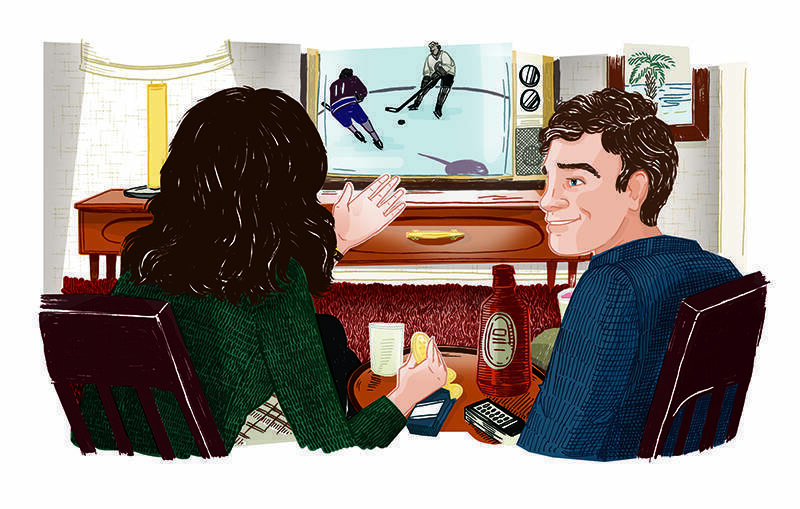 When I realized that Marianne wanted to be with me, warts and all, as much as I did with her, I knew she must be the one.

Especially since the warts were not metaphorical, but actual pill-shaped growths on several knuckles of my left hand.

They disappeared after a few weeks, which I attributed to a commercial hand soap in the employees restroom at the Jewel supermarket where I was a stock boy and Marianne a cashier.

It was a working-your-way-through-college job paying $2.50 an hour. But after I found myself hanging around at the store even when I wasn’t scheduled, I figured I may as well volunteer for overtime.

Everybody loved Marianne. Her checkout line was always the longest, and she knew her customers’ first names.

Funny how much less I dreaded mopping the tile floors or stocking the shelves with cans of Del Monte Pears in Unsweetened Juice when she was on duty, right there behind Register No. 3. And the overtime pay came in handy after we started dating, so I had cash to take her to the movies, to restaurants and to miniature golf courses on our Saturday night dates.

I felt rich enough, in fact, and bold enough, I hoped, for a very special date, come Valentine’s Day, at the Miami Motel.

Cicero Avenue on the South Side was “motel row,” all of the establishments being within easy driving distance of Midway Airport. But the Miami stood out for its beckoning neon sign, palm branches shading the word “Miami,” and the tall stucco wall along the sidewalk shielding the one- and two-bed units from traffic along the avenue.

Up till then, Marianne and I had engaged in what Betty and Veronica in the Archie comic books called “necking.” We would gaze at the stars through the windshield of my 1964 Oldsmobile while parked at Turtlehead Lake in Orland Park.

But a motel was an adult and serious next step, and I had just reached the legal age in Illinois to register at one. Yet it still felt forbidden, for although it was 1971, California’s ’60s sexual revolution with its “free love” mantra had yet to establish a beachhead on Lake Michigan and the Midwest. Not to mention that both of us were Irish Catholics living with our strict (mine) and religious (hers) parents.

Friday afternoon, payday, we found ourselves alone in the Jewel’s break room, where I had brought a cheeseburger I’d purchased at Wimpy’s across the way.

Sitting across the table, Marianne pulled my paper plate in front of her. She sawed the cheeseburger in two with a plastic knife, sliding the tomato slice onto her half before slathering mustard on mine.

It was a game we enjoyed, minding each other’s business, as when I removed a cigarette from her lips, or she, a pen from my hand. A game ongoing, unacknowledged.

“For Valentine’s Day,” I said, “how about if instead of bowling, we go to the Miami Motel?”

She looked up from the plate, slitted her eyes in mock disapproval. Till she realized I was serious.

That night I got little sleep, going over Saturday’s date in my head, visualizing it like a movie, rehearsing the transaction with the hotel clerk.

By Saturday morning, I had convinced myself it would be best to get a room ahead of time, and I drove over in the late morning to get the worrisome business out of the way.

The room rate was more than what I normally paid for two or even three of our dates. But the nickel-colored room key for No. 219, secreted in my back pocket, was worth two or even four weeks of swabbing floors and stocking those shelves.

Did I mention that Marianne was beauti-ful? Not in a splashy way like Marilyn Monroe, but more subtly, like Katharine Ross: Long, dark brown hair, eyes gleaming with generosity. But she was also smart, and on Saturday she knew where we were headed as soon as I said it was a surprise.

I glanced but couldn’t read her face when I turned onto Cicero Avenue. And as I pulled into the Miami’s parking lot, I could feel her sit back to take it all in.

“Just say no, and we’ll forget about it,” I said after shutting off the engine. “Bleeker’s bowling alley is just a couple of minutes from here.”

She scanned the U-shaped building with the iron railing along the second story.

“We should leave by midnight,” she said.

Room 219: Shag carpet, dark brown. Framed pictures of palm trees and seagulls on the wall. A 19-inch Panasonic television with remote control. Queen size bed with a red and gray quilted spread. And a bathroom with a stack of neatly folded white towels on the counter.

“What do you think?”

Its best feature, I realized, were the curtains. Admittedly plain: yellow, pleated, with a white, plasticky liner. But when I closed them, we were the only two people in the world.

I poured wine for each of us into the clear plastic cups. I had splurged on Lancers Rosé, since it was Valentine’s Day. And we sat in dining-room-style chairs at the little round table, kitty-corner to the bed.

We talked about school, particularly German, the only class we had in common at Chicago Teachers College. And wouldn’t Professorin Frau Schreiner like to see us now?

Marianne asked which of my five brothers I was closest to (Kenneth), and I, in turn, asked for recitation of the names of all five of her sisters.

Other questions about work and parents and my dumb parking ticket, and do you want more wine, and pretty soon we ran out of topics.

Momentary silence, as she extracted a swizzle stick from the motel coffee packet and stirred the ice cubes in my Lancers.

“No. I understand. To be honest, I’m relieved. The pressure’s off, you know?”

I stood, then genuflected before her chair and put my arms around her. To reassure. More probably, to keep hold. And then I turned on the fancy TV, tuning to Channel 9 and the Chicago Black Hawks hockey game.

“But all the money you spent on this room,” said Marianne. “And the wine.”

“What do you mean? This is perfect, watching my team with the person I love. And without my brothers in my hair.”

The Hawks had a one-goal lead over the Vancouver Canucks, halfway through the first period.

“Why are they all stopping?” said Marianne.

I explained the rule. She opened a package of crackers and poured more wine. We spent the next 90 minutes watching Stan Mikita, Bobby Hull and Lou Angotti.

She thought it was so funny that Bobby and his brother Dennis played on the same team but on different lines. And as she started to pick up on the goals and the strategy, she decided her favorite was Eric Nesterenko, the way he prowled the rink with those droopy shoulders and a crown of thick, dark hair that looked like mine, at a time when helmets had yet to be mandated.

The Black Hawks would win, 3-1, and we checked out well short of midnight. It’s a good thing, too, since my Oldsmobile, out in the cold, would not start.

When two other couples came out to their cars, Marianne ran to intercept them. I heard laughter, and then she waved me over. They were happy to let us squeeze in. They were headed to a Valentine’s party in Beverly and would drop us off at Marianne’s, after which she would drive me home in her own car.

The next day, when my brother Kenneth drove me back to the Miami with his jumper cables, I was conflicted about what to tell him. To his credit and to my relief, he never asked.

The Black Hawks won more than they lost that year, and Marianne became a knowledgeable fan.

In the fall, on a trip to Iowa to see a college football game, we checked into another motel. Same carpet as at the Miami. Same towels. Same kinds of pictures on the wall.

But we had grown closer as friends and lovers. We were in a zone, like a pair of violinists in no need of sheet music. It was a gift that nothing could surpass.

What Marianne had intuited that first time at the Miami was not that the time was wrong. More a matter of that exclusive “place” we had yet to inhabit together.

A year and a half would pass before we paid another visit to the Miami Motel — on Valentine’s Day, for old time’s sake. Again we watched the Black Hawks on TV. But this time we arrived in a brand new Chevy and with a pizza from Rosangela’s. And we signed in as husband and wife.

David McGrath is professor emeritus of English at the College of DuPage and author of South Siders, a collection of his stories and columns on life in the Midwest. Contact him at mcgrathd@dupage.edu.