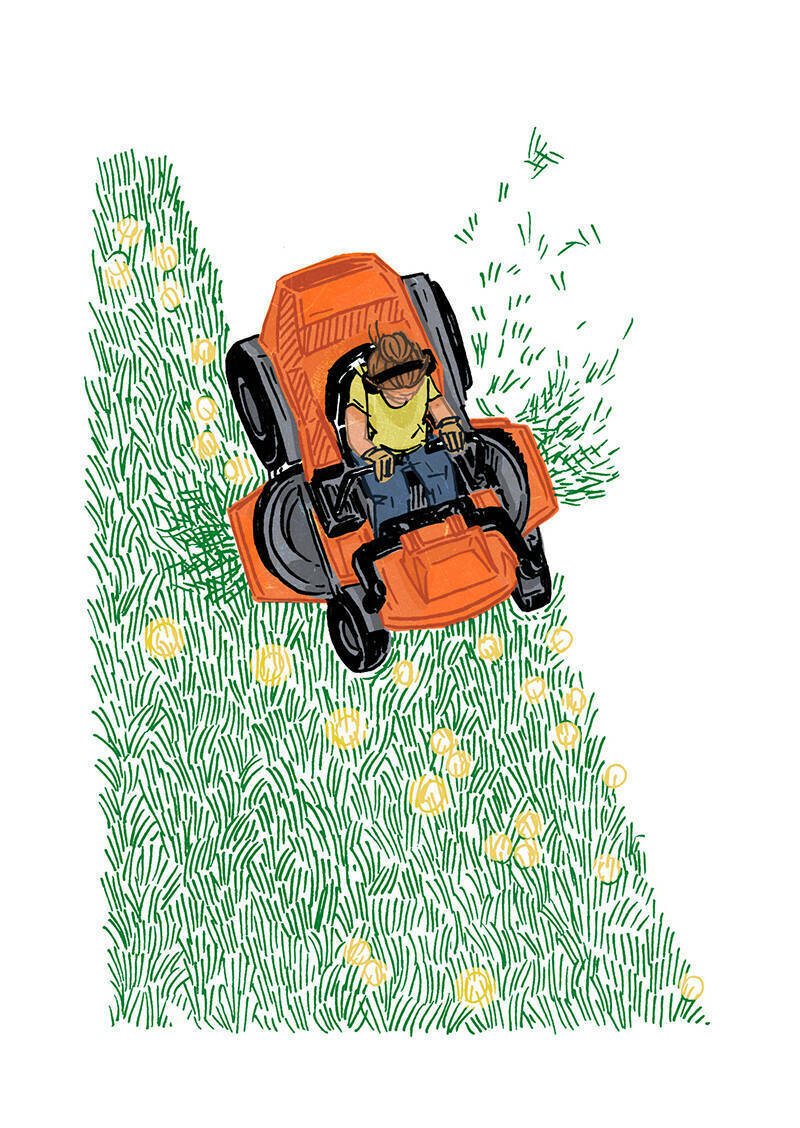 I started mowing our lawn as soon as I was tall enough to peer over the push bar. A few years later, after Grandpa lost four toes to his jury-rigged John Deere, I took on my grandparents’ property. I mowed our subdivision’s medians as a middle-school side hustle, spending my meager wages on sugary sodas we weren’t allowed at home. Later, between semesters at Notre Dame, I would head home to sweat through summers as a groundskeeper for the Wisconsin Rapids public school district. My father, a long-tenured vice principal, got me the gig. It was humbling. I was scraping roadkill, shoveling manure, chalking fields. Friends had Hollywood internships, European vacations, clean fingernails.

I still have a scar running up my spine from that job, the result of my stupidly wedging a zero-turn mower backwards beneath a crabapple tree. The branch also stole my shirt, ripped it in two and dangled both halves over my head like a schoolyard bully. I remember bouncing bloody-necked and bare-chested down the shoulder of Highway 54, no seat belt on my wing-decked Toro, traffic screaming past me at twice my speed. I was smiling ear to ear.

Sometimes work was wild. We picked off pocket gophers with a .22, slaughtering the scourge of the football practice fields. My boss wakened some teens who had passed out drunk, their still-running Honda stuck halfway through a batting cage. I rescued stolen bikes from flagpoles, tree branches and rooftops. I charred my knees with second-degree sunburns; I burned bratwursts on portable gas grills and scarfed them down on playground swings. And, oh yeah, there was that one afternoon I almost died, toothpaste-tubed between an unmoored stake truck and a soccer goal.

They’re scruffy and unkempt, these memories, jutting out from the grain like ragweed. In reality, the majority of my time on a mower was deliberate, repetitive, morosely mundane. Back and forth and back and forth, braking only for the odd baseball or bullfrog. I exhausted the audiobooks I cranked up above the engine’s tedious roar, punishing my poor eardrums to placate my wandering mind.

In spite of myself, just like the shoots of grass bending to my rotary blades, I was growing. Life is a ceaseless scythe, one that is going to continue slicing my head off, slicing the heads off everyone I know, forcing us all to heal and deal, to scream out then start fresh, over and over and over and over. Acknowledging that reality can be frustrating or it can be Zen, burdensome or freeing: That’s a personal decision.

Attitude aside, one thing’s guaranteed. No matter how well you mow your lawn, you will always have to head back out soon and mow it again.

Reggie Henke is an award-winning comedy writer who worked on Jordan Peele’s Twilight Zone  reboot and Netflix’s I Think You Should Leave. He lives in Los Angeles.