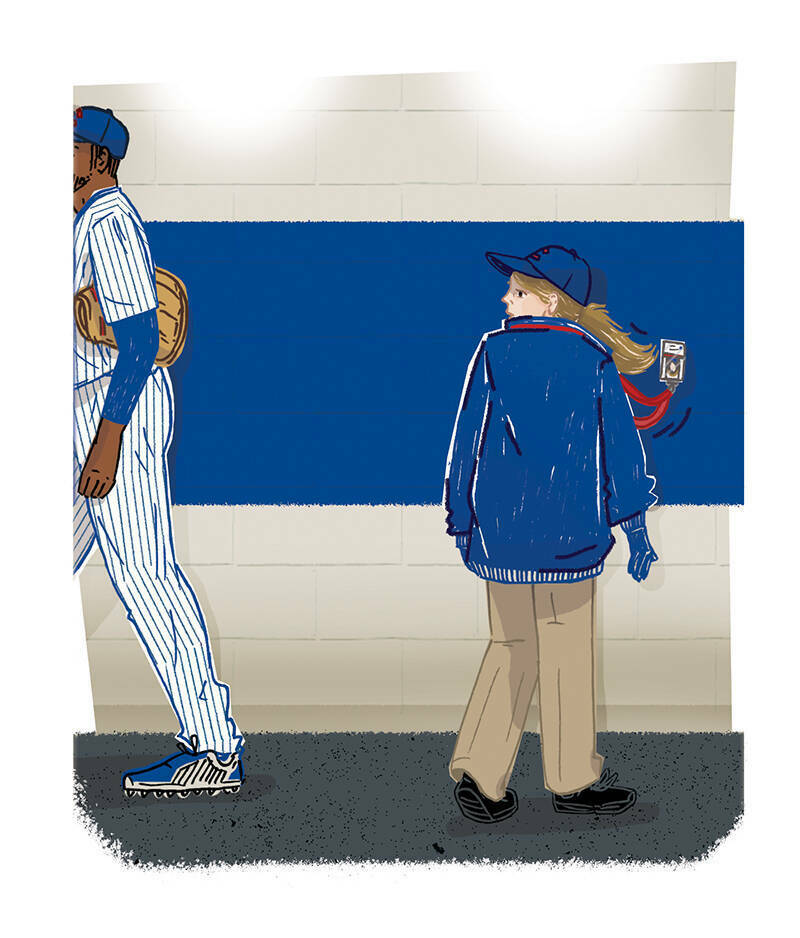 I was standing outside Wrigley Field with thousands of other fans on that night in November 2016 when the Chicago Cubs broke their 108-year World Series championship drought in Cleveland. I didn’t get to see Bryant’s final toss to Rizzo to seal the Game 7 win in the 10th inning, as there wasn’t a television to be found in the middle of Clark Street where my family and I celebrated with the rest of the North Side. But I would have front-row seats for much of the 2017 season, when I signed up to be a “guest services ambassador” (better known as an usher) for the summer before my freshman year at Notre Dame.

As a rookie usher, I worked the gate most games for the two hours before the first pitch, and sometimes I would have to stand around long after that, scanning in stragglers and letting out smokers. I inhaled a lot of secondhand smoke the summer I turned 18. We’d stand there, calves burning, for hours on end, timing the innings and shooting our widest smiles at passing fans.

The ushers’ locker room was located along the same hallway as the team clubhouse, and it wasn’t unusual to pass a player who had hit a game-clinching home run or a pitcher who had struck out one batter after another. I was a lifelong Cubs fan and still very much a kid: These guys were pretty much the biggest celebrities in the world for me. Walking mere feet away from Anthony Rizzo or David Ross or Javy Báez, I’d feel my heart speed up while I avoided eye contact so as not to make a fool of myself — or somehow get fired for doing something wrong. (I know now that was a very unlikely scenario.) How was I not supposed to stare, though? These men had broken the curse I grew up with, that my parents grew up with, that my grandparents not only grew up with but didn’t live to see ended.

As summer went on, I had more and more lucky days when my supervisor assigned me inside the park. This was unimaginable. I was getting better seats than I’d ever paid for — and I was getting paid to sit there and watch! And, of course, to tell fans where the nearest restrooms were located. I got sunburned in the bleachers; I once filled in for a VIP-section usher who had fallen sick; I ushered in the nosebleeds during a game that our ninth-inning closer just couldn’t wrap up. I worked a Jimmy Buffet concert my family bought tickets for, and I didn’t even get to see Jimmy Buffet.

The most important thing the Cubs gave me, though, was a blazingly bright blue, fleece-lined coat to wear during the March and April games I shivered through. Several sizes too large, with an enormous Cubs emblem over the pocket, it became my winter coat for my first few years of college. It certainly didn’t keep me warm enough in the Indiana winter, and I ended up buying a real winter coat for my job at the South Bend Tribune, but throughout my four years at Notre Dame, people would stop me to tell me they liked that coat. Several later recognized me as “the Cubs coat girl.”

I still wear the coat when spring training starts. My friends call mid-February “Cubs coat season.” Even though my beloved team hasn’t yet made it back to the World Series, I’ll wear that coat proudly until the day it falls apart. But I’ll never again work a job that makes me stand for six hours at a time. As fun as that was, it really hurt my feet.