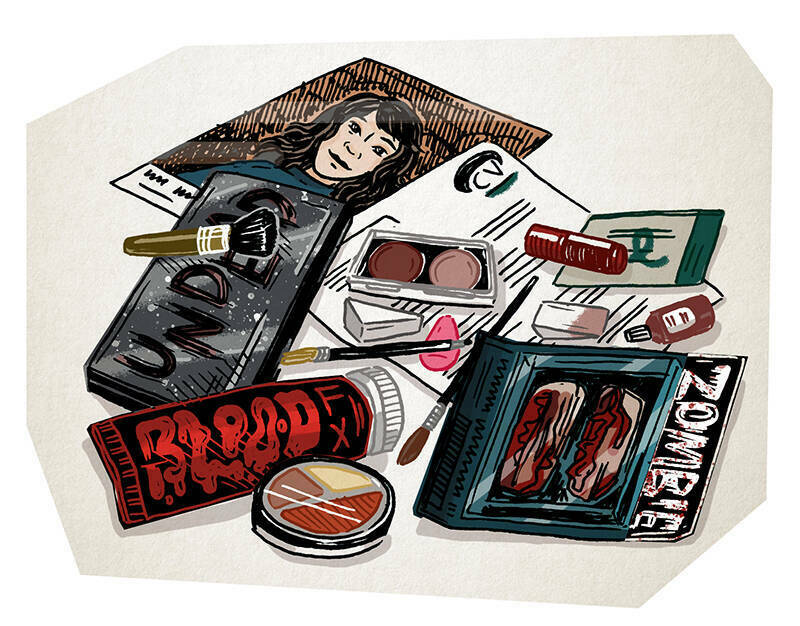 Like countless 20-somethings in Brooklyn, I was working three jobs and trying to be something else. In my case, a novelist. Concepts like “disposable income” and “retirement fund” were becoming increasingly abstract to me. In those days, I never said no to employment, so when a fellow babysitter asked if I’d do zombie makeup for a Halloween party she was coordinating, I didn’t hesitate. Like me, Natalie was working multiple jobs while pursuing a career in the arts — acting and screenwriting. “The host pays well,” she told me. “I’m her assistant. And she’ll cover all the expenses.”

A few nights before the party, I bought supplies at a Halloween store, watched tutorials and applied zombie makeup on myself to practice. I’d never done it before.

Well, I thought as I studied the result. It must be good, because I look exactly how I feel.

On Halloween, I arrived at the address at nine in the morning, the sky gray, the air crisp and perfumed with fallen leaves — the kind of autumn in New York that Ella Fitzgerald sang about. Natalie greeted me outside and led me into the house, where I met the host. She was a screenwriter, and I knew most of her projects. Everyone did. Inside were high ceilings, caterers, pumpkins. Some conflicts involving dry ice. I didn’t know such a large house could fit in the Village.

Natalie, who was cheerful and friendly, led me to the basement. With the professional attention of a Broadway set designer, she had outfitted it with at least $1,000 worth of Halloween décor, transforming it into a veritable haunted house. I set up my makeup tools in a bathroom, its floor obscured by fake rats, as Natalie introduced me to three people around my age. “These are the zombies,” she said, smiling. Then she explained the plan: She had invented a rhyming treasure hunt that would bring the kids to each room, and when the time was right, the zombies would burst from their hiding spots.

As I did their makeup, the zombies were chipper and talkative, freshly equipped with drama degrees from New York University and excited for the opportunity to perform. It gradually became clear to me that everyone — including Natalie — was treating this party as an audition. All of the adult attendees were powerful gatekeepers in the film and television industry. The host did pay well, but my co-workers were positioning themselves to receive more valuable compensation.

Many things about the party were disorienting. Upstairs was a bountiful supply of food, but we were not fed. It was chilly outside but sweltering in the basement. Deprived of clocks, windows and cellular service, I had no sense of how much time passed. But I had other reasons to feel foggy and exiled. Recently, I’d met with an editor I admired. He had advised me — gently — to put my book in a drawer and consider it practice for the next. I had spent months awaiting the meeting and years writing the book. Ever since, I’d been unable to eat much or sleep through the night, and I kept absconding to bathrooms to cry. The meeting had locked me in the cellar of my mind, so it seemed fitting to spend a day in a haunted basement while more successful people laughed on the floor above.

Finally, the children arrived and Natalie set her plan into motion. The execution was flawless. When it was time for the zombies to perform, they did so with astonishing energy, inhabiting their characters with the kind of full-bodied abandon that appears natural but actually takes years to learn. I, for one, was terrified. A few of the kids were, too. As the zombies frothed and lunged, their faces worse than dead and their noises inhuman, I watched the adults for signs of imminent job offers. Chatting amiably among themselves, the parents seemed oblivious to the effort before them. As time passed, the gulf between the zombies’ expectations and the parents’ reactions became more and more obvious. Both the expectations and the reactions were inevitable, and that’s what saddened me most.

The performance ended unceremoniously, at which point the parents and their children ascended the stairs for pizza.

Soon after, the zombies spiraled into crises. One spoke forcefully about how different things would be for him when he moved to Los Angeles. He complained that the makeup was going to ruin his complexion and began a lot of sentences with “My agent . . .”, then spent the rest of the time rage-texting. Another zombie said she was giving up acting for good. The third zombie — the sweetest — began to cry. “I mean, what the heck?” she sniffed through her cracking makeup. The artificial wound I had given her was still fresh, the blood cherry red and glistening. It was alarming to see the undead so vulnerable. “They didn’t even look at me,” she said through tears. “I was giving it everything I had and they didn’t even look at me.”

I rummaged for some consolation, but couldn’t find anything both uplifting and sincere. It was one of those situations where the similarity of our injuries made me worse at comforting her, not better.

Eventually, the children returned, requesting their own zombie makeup. Zombie Mario, zombie cat, zombie Elsa. But the makeup wasn’t enough. They also wanted fake wounds, like the ones I had given the actors. This required fake blood and fake skin, little of which remained. When I relayed the shortage to the children, they protested.

“Please!” they cried. “One wound! Just one little wound!”

And all I could think was, What’s the rush?

Tess Gunty studied English and creative writing at Notre Dame and NYU, where she was a Lillian Vernon fellow. Her debut novel, The Rabbit Hutch, will be published by Knopf in 2022.