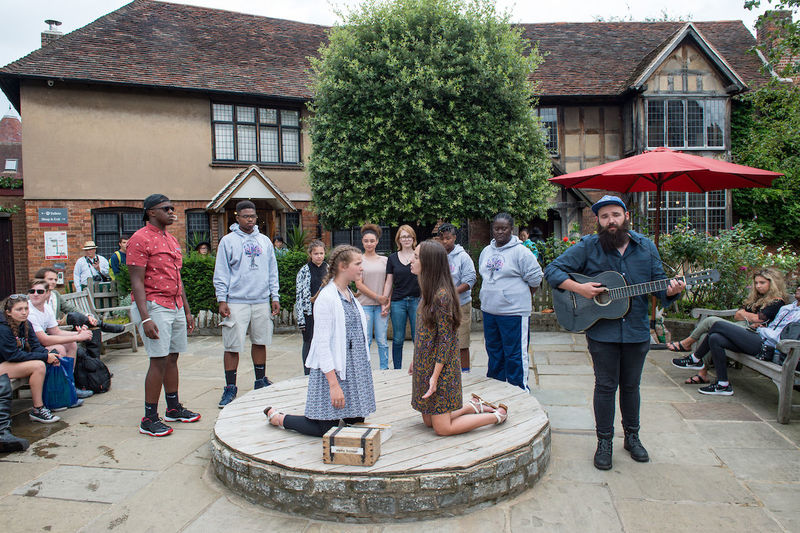 British actors James Tanton and Chris Dunford perform for tourists passing through the garden behind the historic home in Stratford-upon-Avon, England, where William Shakespeare was born in 1564. They take requests.

Visitors shout out favorites and the actors deliver. On Thursday, Tanton and Dunford offered extended selections from Henry V, Romeo and Juliet, Othello and Macbeth, among many others, to the amazement of the young Robinson Shakespeare Company actors who arrived in England earlier in the day.

“That’s goals,” ensemble member Precious Parker said, adding with a laugh, “I have one monologue.”

Since the Robinson group came to town to perform Cymbeline on Sunday at Shakespeare’s New Place, they naturally wanted to hear something from their play.

It’s not one of Shakespeare’s more familiar works, but the Robinson Shakespeare Company players know it. To their surprise, they were asked to perform a scene of their own, right there, right then.

As if to confirm that this impromptu performance was meant to be, Tanton even had a guitar at hand for cast member Joe Russo to use to set the mood.

For a couple dozen tourists from different corners of the earth, some with their phones trained on them, the ensemble ran through their first scene, introducing the context and characters of Cymbeline in the shadow of Shakespeare’s birthplace.

They’ve performed for bigger audiences, heard more applause and definitely been less jet-lagged on stage, but the setting and circumstances left director Christy Burgess clutching her heart with pride.

This wasn’t part of their itinerary. The moment just appeared out of nowhere, like magic.