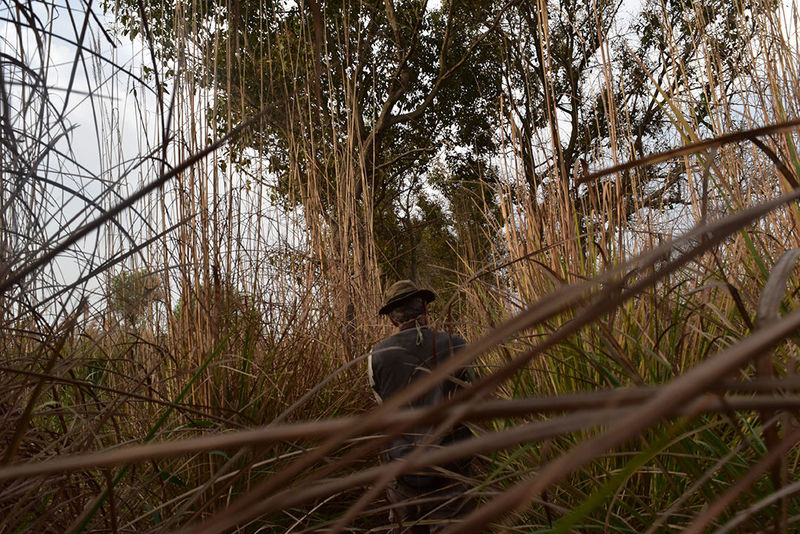 When I was a girl, my favorite vacation spot was the Flume Gorge in Franconia Notch State Park, New Hampshire. Year after year, I would lag behind my family and trail alone through the mossy granite walls, pretending I was struggling through terrain in some lost world with a film crew for National Geographic. In my mind — despite the railings along the gorge walls to shield against true danger — my crew and I were unprotected, struggling to blaze through remote landscapes.

What thrilled me most was imagining that I wasn’t in a small state park with the safe cushion of civilization nearby, but in the Out There, a totally unhemmed, unsheltered wild, where nothing was safe and everything was more real.

That was the same nagging discomfort that followed me through college — that there was a place somewhere out there where I could feel more deeply, where everything was more vivid, more raw, more true. For spring break my senior year, I finally got the chance to chase my wild.

I asked National Geographic journalist Paul Salopek, who I had previously interned for in Washington, if I could join him in March 2018 in India on his Out of Eden Walk — a 10-year, 21,000-mile trek around the world on foot, from Ethiopia to Patagonia.

I was a senior at the time. I dutifully slogged towards my degree, longing to one day join the league of rugged outdoor writers. Working for the man walking around the world seemed to be the epitome of this, but as I studied in the shadow of a legend, I wondered if I could truly ever be counted among his ranks. He and his contemporaries had beards and muscles, and voices several octaves below mine. I was a young woman, five feet tall.

My modus operandi has always been to say “yes” immediately and leave the “how” for later. I shut my eyes to the gritty reality of what I had signed up for, afraid that if I thought too hard about how intense things could become, I’d be filled with self-doubt and back out. I received a grant from Notre Dame to pay for the trip despite not being able to provide key information in the application: where would I meet up with my mentor once I was in India? Impossible to say until I got there. Where would we be going while I was there? To know ahead of time would violate the very ethos of the project. How would we secure lodging ahead of time? We wouldn’t.

I shivered in the snow as I trudged across campus the morning of my flight, having refused to wear a jacket that would be dead weight on the trail. I felt a flicker of pride when the attendant at the airport looked incredulously at me when I told her I had no luggage to check for a journey to India.

But somewhere over the Atlantic, white-hot dread began to fill my chest.

Impossible eons later, I’d landed and been driven to a house at what seemed to be the final border between civilization and wild country, where I met up with Paul and his trail guide-slash-translator, Arati Kumar-Rao. Sitting around the table that night, solemnly chewing naan, all I could think about was what awaited me the next morning — the unguarded wildness I had craved. The dream becoming reality loomed heavy over me now.

“If you start to feel your feet get hot, speak up,” he said. “If you try to fight through the pain the first day, you’ll get blisters, and it’ll only slow us down more the next day.

I woke up at 4:30 the next morning and desperately tried to lighten my pack as much as possible. I threw out my pillow, my sandals, my soap, flailing objects across the room as if suddenly I would feel unburdened and ready.

There was no turning back now. The only way out was through.

We made our way through crowded streets, scaring stray dogs away as we walked. Then we turned off of some railroad tracks onto an empty plain, and, abruptly, I was officially on the Out of Eden Walk.

At first it was pretty quiet — just the sound of our feet. I focused on breathing, steadying my pack, keeping up. We spent the day walking through Punjab farmland.

I realized a few kilometers in that I was thinking like we were on an excursion, that we’d be returning to the house that night. But there was no returning. We had everything we owned on our backs. We were completely transient, forging onward, irrevocably.

There was nothing around us but open plain. Everything we did was on display — coughing, sweating, panting, tripping. There was no toughing it out until a pit stop when we could duck into a bathroom to wash our faces, fix our hair — here it was all inevitably freed, without a façade of put-togetherness.

We were trekking across a sweltering expanse, never closer to the twitching horizon. I was startled when I was informed that we had actually been on the road for several hours, and we’d hit the heat of the day. Stupidly, I hadn’t brought a hat, and even though I’d wrapped my head in my headscarf to protect it from the sun, I was badly burned. My pack was digging into my shoulders so mercilessly I felt they might bleed.

That night, Paul examined my feet under the light of his headlamp, bandaging my toes, gauging if my blisters should be popped or if we should wait until tomorrow. He felt pressure points where he knew blisters would develop soon. Arati sat bandaging her own feet and laughing, saying that Paul was the best roadside podiatrist in the world.

The next morning we re-laced our boots, slung our packs over our shoulders and started out again.

The second day’s trail was much calmer than the one before, when we’d been laid out bare beneath the uncovered, scorching sun. Now we were on a long, dusty road. There were even a few trees every now and then.

Periodically, people passed us and questioned us.

“Where are you going?” they’d shout.

“Argentina!” Paul would call back.

A couple times ox carts pulled over, asking with concern, “Do you want a ride?”

“You want to walk?” they replied, incredulous.

We called kilometers “klicks,” like Marines. I started to pick up some tricks of the road, like how wearing a scarf around your neck won’t make you hotter, but it will protect you from the sun, and make for a quick fix if you suddenly pass a Sikh gurdwara and need to put a headscarf on.

I felt a satisfaction with all the physical injuries I was racking up. At that point my shoulders, back and arms had been rubbed raw. My feet felt like someone had taken an ice pick and match to them, simultaneously. I had a horrible sunburn, rashes from my skin reacting to Indian tap water. Bruises, scratches, blisters, sweat and blood were caked onto me. But it was an invigorating pain, so much better than sitting in a college dorm, safe and soft and unmarked.

At the end of the day, after all our blistering hours, it was time to recover. We found shelter in a bungalow on the edge of a wildlife reserve.

Sitting in bed together later that night, Arati told me that before I arrived, they had planned to slow way down when I was with them.

“‘She’s just a 22-year-old college girl, there’s no way she can do 30 clicks a day,’” she recounted, beaming. “But here you are, barreling through!”

I smiled to myself as I bandaged my toes, relishing in the utilitarian griminess of it. I had thought that I was only an imitator. But my toes were bleeding just the same as Ati’s and Paul’s, my clothes were as dirt-streaked, my pack as weathered.

I hadn’t counted myself among the community of seekers and the adventurers, however much I wanted to be one of them. I had thought myself too small, too weak to hack it.

Exploration, I’d discovered, isn’t a gene bestowed at birth. It is an active choice that’s open, like the world Out There, to anyone.

Andrea Vale works on the Out of Eden Walk at the National Geographic Society in Washington and is also a freelance environmental journalist.