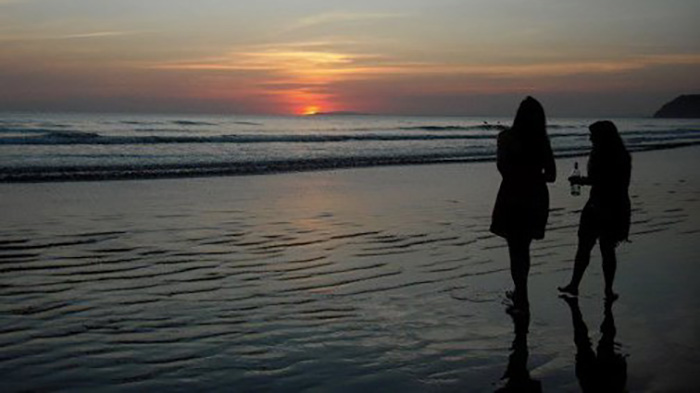 A spring break sunset reminds vacationing seniors of the waning days of their college years.

Every night we came back to the table.

Custom-built from locally sourced rainforest trees (at least that’s what we imagined), our table could seat all 18 of us. It was on our patio, next to the pool and the grill and the doors into our rented house in Jaco, Costa Rica. The patterned teakwood was perfect for that beginning-of-a-buzz zone-out. Deep grooves made our plates sit crooked and our glasses tip easily.

We had flown from Chicago through Mexico City, waiting out delays by reading airport magazines with headlines like “LIL’ WAYNE VA A CARCEL!” and “El Hijo de Bin Laden.” We landed in the morning, took our 15-passenger van ride two hours west toward the Pacific coast, threw our bags into the house and promptly walked to the market down the street for our first beer run.

We came back, cases of a local brew called Imperial in hand, arguing about sleeping arrangements. No one wanted the bed right next to the bathroom. No one wanted to share a room with the couple, but the decision was tough — there was a twin bed in there, across from the queen. It could be that or the living room tile floor. No one wanted the responsibility of climbing into the loft every night.

And no one saw the table at first. In our hurry to claim space and decide if sleeping outside was an option, we all looked past it, taking in the pool and the outdoor shower and the palm trees.

We spent the first day at the beach, black sand between our toes, bottles tipped up toward the sun, “We No Speak Americano” blasting from a speaker on a towel. We were just getting warmed up.

The second day, someone came out to the patio with breakfast and sat at our table. The rest of the hangovers joined slowly, some clanking around the kitchen first only to remember we’d bought nothing but booze from the market. Some never left the table, feet up, asking others to bring them water or Gatorade or food or anything. This was the beginning.

The rest of us explored Jaco, kicking up dust on the dirt roads with our flip flops and stepping into every little shop we passed. The boys discovered a shared crush on the woman rolling cigars. The girls made a successful trip to the market, complete with food purchases this time.

We grilled on the patio, each of us taking a seat at the table. A bunch of “would you rather” questions were raised, becoming increasingly more targeted. We had known each other for years — pushing buttons and revealing secrets was a given. The games began.

Time was not kept. GirlTalk’s Feed the Animals album played all night. Some got up from their seats only as the scent of the new tide drifted in on the breeze and the sun rose over the nearby green mountains.

By the third day, we had already purchased the entire supply of Imperial beer from the market, moving on to more sophisticated beverages like Bacardi Limon with Fresca. Just a little Fresca. We hung on the patio, some at the table, some in the pool, moving only to refill drinks and eat when we remembered. Telling stories about freshman year, collectively cringing at a few incidents and cracking up at the rest.

That night we treated the main street of Jaco like Bourbon Street on Mardi Gras. Open containers. Yelling from bar balconies at people walking below: “Oye, hombre! Si, tu! El Calvo! Camisa Azul! Tu!” Making drinking buddies out of anyone standing next to us. Kicking off the late-night dance crowd back at Monkey Bar. This time, the boys — the same boys who went with us to Club Fever every Thursday back in South Bend but never ever ventured onto the dance floor there — started the party. Merengue gets in your blood.

Hangovers merged onto the same schedule of functionality, and on the fourth morning after communal breakfast at our table, we went back to the beach. Cigars were smoked. Waves took out at least three people on separate occasions. Someone was stung, we think by a stingray, but refused any medical care other than a band-aid. Vertical bottles. Swimsuits lost in the sea. So many bouts of laughing that our abs were sore. Back home to our table. Games. Drinking from measuring cups because we used all the dishes in the house. “Infinity 2008” playing on repeat. We hit our stride.

We were actual tourists on the fifth day, hiking through a rainforest to a white sand beach, bickering about punctuality and who rushes through sightseeing and who takes too long. We ended the day around our table, calling each other out for past mishaps and misadventures and missed opportunities. Always capped with a smirk. We finished our drinks and then had a chicken fight tournament to decide who got to sleep up on the loft because public opinion had changed after discovering it was fun to climb the ladder at 6 a.m.

The last day we took a boat to a tiny island we thought was made for us. We met Philomena the Wild Island Pig and drank from coconuts and spent all afternoon in the sea. Some got life advice from Monchito, the man who sold oysters as aphrodisiacs, and others kept yelling “EXTREME!” while finishing the island supply of Imperial. The palest of us “wanted a little color” and instead turned into a tomato.

We came home and started our last night. Stumbling onto the patio, celebrating a birthday with a cake topped with cigarette candles and a condom balloon. A hoarse chorus of “happy birthday” followed immediately by loud, crude “would you rather” questions we had been mulling over all day. Faces with sunburns that missed the creases around our eyes and mouths because we hadn’t stopped smiling.

In a quiet lull in conversation, a feeling of finality hit me. Not just of the trip, which would be over when we left for the airport early the next morning, but of this. In less than two months we would graduate and life would get in the way of all of us being together like we had been in Costa Rica.  Like we had been on campus. Together had been our favorite location, and it could have been anywhere.

The people I’d keep at my table, always.