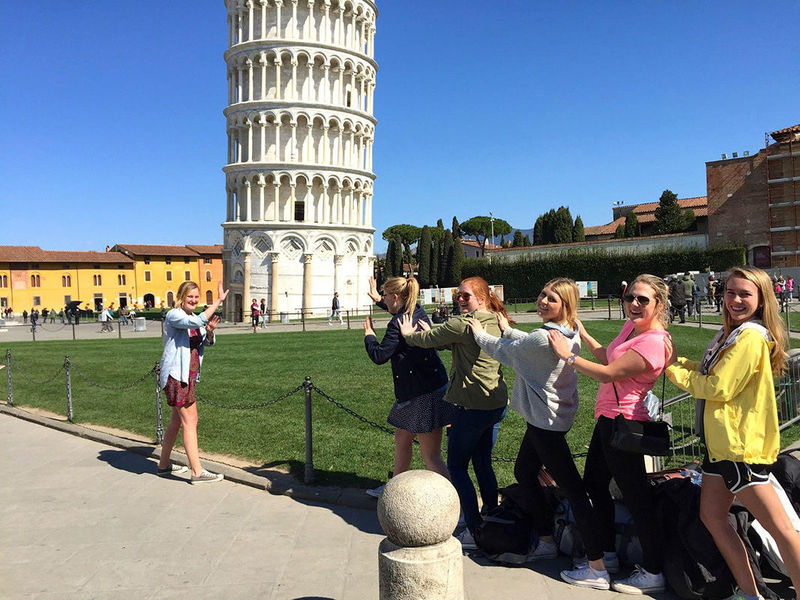 Not quite the classic picture they were hoping for.

It was my junior year spring break. I was studying that semester in Notre Dame’s London program. Fifteen of us decided to venture to Italy for our week off. Rome, Florence, Cinque Terre. Pisa. Venice. That many 21-year-old students traveling to a country where they’d never been before — and one where they, very obviously, didn’t speak the language. What could possibly go wrong?

A lot. It was the trip of so many fails. In Rome, the famous Trevi Fountain was under construction, so we couldn’t throw one-cent Euros over our shoulders to make wishes — symbolic, as it turned out, of what would be a whole week of unfulfilled wishes and thwarted plans.

It was freezing in Italy that March; we packed as if we were going on a summer vacation. The sun deceived us, shining brightly but radiating no warmth on us as we walked the chilled Italian streets. We did (admittedly) always have frozen gelato in hand, so that didn’t help.

We overstuffed our Airbnbs; places designed to hold eight somehow had to accommodate our 15. We had couldn’t overlook any potential sleeping spots. We lined up cushions on floors to make mattresses, pushed chairs together to create bed frames and, in Florence, we even stooped so low as to fill a bathtub with pillows and blankets.

Italia Rail defeated us on our trip from Rome to Florence. It was a cross-country train, so every stop outside Rome lasted a leisurely 10 minutes. But that would not be the case (for whatever reason) at the Florence stop. We had no idea. When the “Firenze” announcement came over the speaker and the train pulled into the station, we took our time getting up and grabbing our bags. Within seconds, the conductor announced, “doors closing.” We panicked, sprinting to the nearest door just as it, literally, closed in our faces. We had to continue another 45 minutes to the next station. Not to mention, during this ordeal, one of our passports was stolen.

Throughout Italy, we had zero cell phone service. We couldn’t use Google Maps to navigate the unfamiliar cities or text fellow Notre Dame spring breakers also hopping around Italy that week to meet up. (I can hear the groans from older alums who had nothing more than a Eurail pass and paper map. Imagine you didn’t even have those. That’s what it was like.)

As the week went on, though, it turned out that there was a flipside to each of our travel woes.

The freezing weather meant that the coastal region of Cinque Terre was out of season. We had all five towns completely to ourselves. So we could belt out Les Mis songs as loud as we wanted, hiking from Riomaggiore to Corniglia.

Jam-packed Airbnbs became viewing party venues for “classic” Italian movies, like The Lizzie McGuire Movie (which we considered Italian because it’s based in Rome and filled with Italian pop songs).

Instead of the closed Trevi Fountain, we stumbled upon Fontana dei Quattro Fiumi, a hidden gem outside the Church of Saint Agnes in Piazza Navona that we might have ignored otherwise.

Missing our train stop let us check Bologna off our list of places visited (even if it was just for a few minutes) and we still made it to Florence in time to take in the sunset from Piazzale Michelangelo.

And the stolen passport added a daytrip to Milan and a tour of the U.S. Embassy to our itinerary.

Drinking Peroni like water made mornings a little rough, but it also made the karaoke performances at Scholars Lounge more entertaining. By the end of the night, we had no choice but to grab some late-night gyros at a local spot, Eeko’s, overlooking the ruins where Julius Caesar met his end.

No cell phone service also made our trip more spontaneous. Our friends from Greece were supposed to meet us in Pisa, but we didn’t know where they were and couldn’t reach them to find out. We were all supposed to catch a flight together and we worried that they’d miss it. After admiring the Leaning Tower of Pisa, we turned around to leave and, right behind us, there they were.

To commemorate our accidental run-in, we took the classic tourist picture pretending to hold up the Tower. Or, tried to take the picture. It turned out to be a photography fail, but it gave us a good laugh. Another routine tourist achievement that we somehow failed to unlock.

Boarding my flight back to London, I still remember how relieved I felt. Looking back now, I’d say we discovered a bit about resilience and friendship along the way. And, to this day, it remains one of my favorite Notre Dame adventures — but the one I’d least like to experience all over again.

Kit Loughran is an account supervisor at Cramer-Krasselt in Chicago and a former intern at this magazine.