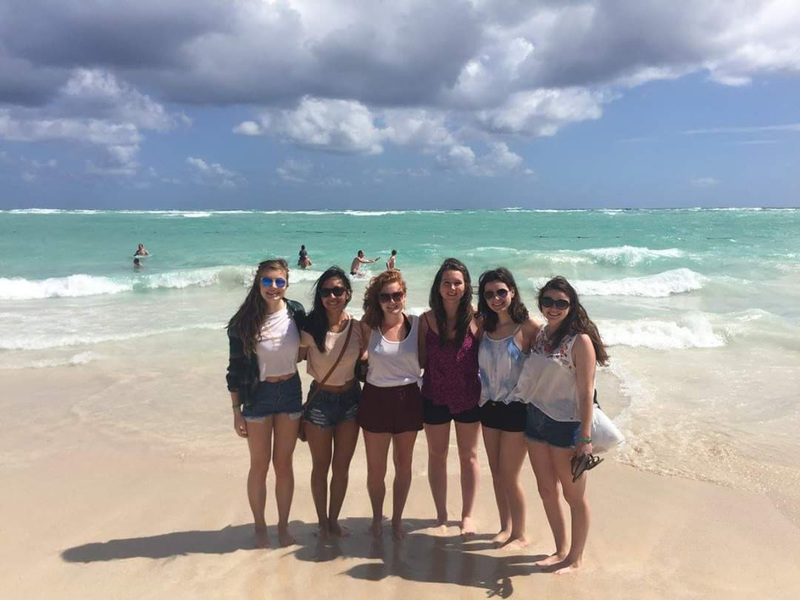 The author (second from left) and her friends found a destination that met their requirements.

There were the two requirements for our sophomore spring break destination: somewhere warm and somewhere we could drink and not get written up by a cop, priest or nun.

I remember the unglamorous way that we planned it: six girls sitting on the floor of a Breen-Phillips room, trying to find the most exotic location our money could buy and being upset as we realized we could not afford one destination after another.

Through sheer luck and rigorous web searching, we settled on Punta Cana. We had overheard junior girls in our dorm talking about the coastal region in the Dominican Republic. This was enough to assure us that it was a worthy destination. Combined with the average March high temperature of 85 degrees and the drinking age of 18, we were sold.

Spring break was such a glorified rite of passage that I was certain this trip would solidify my identity as a college woman. So, fueled by a desire to hold on to the friendships I had made so far and a fear of missing out, I forked over the small pittance I had made from working at a bakery in high school and waitressing in college. This short-term, financially irresponsible decision left me far too dependent on Flex Points and Domer Dollars, but it turned out to be a great investment.

Emily, the micromanager of the bunch, assigned rooms based on our sleeping schedule. Emily and Rosie would stay together since they would wake up early and be among the first to get to the beach. Julia and I would share a room since we woke up pretty early — but not early enough to take full advantage of the day by Emily’s standards. Rachel and Katie would take the other room since Emily deemed that they were most likely not to be spotted until lunch.

When the sun wasn’t drying us out on the beach, dehydration was self-inflicted by imbibing too many legal mojitos and piña coladas. We jumped in the waves, dressed up for dinners and danced at night.

It was our first big college trip. We were adults! I was eating a steak by the beach! Never mind that it was part of an all-inclusive deal that we finessed off of Kayak or Expedia, this was peak living.

Little did we know that we would return to Punta Cana two years later with about 200 other seniors to check that stereotypical big spring break trip off our college bucket list. But it was our sophomore year in Punta Cana that I look back on most fondly.

I think back to our last night on the island, when we received a free bottle of champagne at dinner. We decided to go to the beach at midnight, pop it and pass it around until there wasn’t any left. Even when the champagne ran out the conversation did not, and we continued to sit, unbothered, laughing and recalling memories from the trip.

Spring break sophomore year was the first of many girls’ trips that solidified the early friendships that were so formative during my college years and that I’ve continued to lean on since. Back then our schedules aligned so perfectly that we depended less on questions like “When are you free?” and more on “What are we doing this weekend?”

We continue to bring up memories from this trip, four years later, laughing about the absurdity of it all — and wishing we could teleport back to a time where our biggest problem was figuring out where to go for spring break.