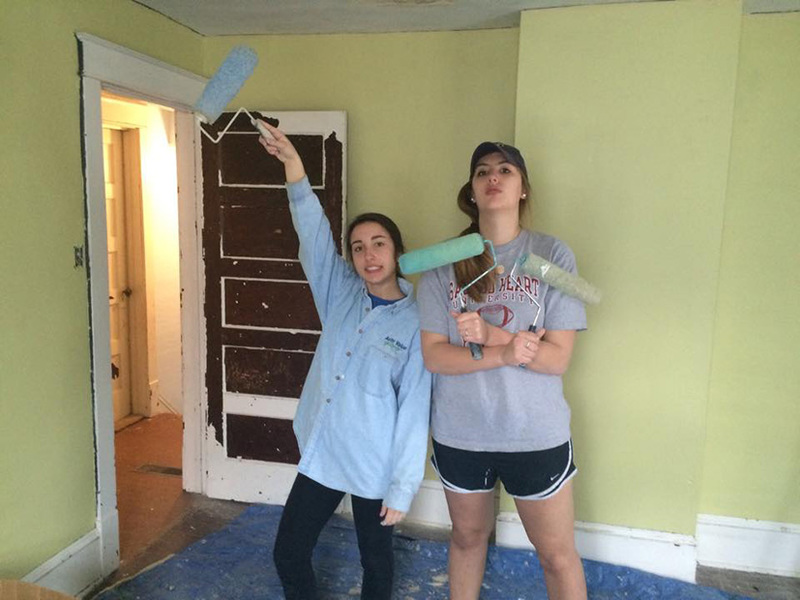 Free of splattered paint for the time being, the author (right) brandishes the tools of her temporary trade.

I wish — like, I really really wish — that, in good conscience, I could say, “Actually? Appalachia didn’t change my life. I am original and cool.” But that would be a lie. The spring break trip freshman year gave me a new group of friends I still keep in touch with to this day, a deeply needed perspective on a different region of the country and several scars on my knees.

I went into the week just hoping to survive it. The whole Appalachia experience wasn’t exactly geared to my strengths — except maybe for my ability to talk to strangers — and all I really wanted was for the week to be over before it started.

I tried desperately to be liked by my group and the people we interacted with, but learned that the best way to make that happen was just to be myself. I wanted to be way more helpful on the job sites than my skills allowed, but learned that sometimes it really is the effort that counts. And I hoped to better understand the Appalachian region without coming across as dumb or entitled, but learned that people are willing to meet you where you are as long as you’ll do the same.

But frankly, one week isn’t enough to make some huge, groundbreaking change. After Appalachia, I didn’t suddenly decide to pursue a service career or anything, but I think I learned a truth that, sooner or later — at Notre Dame or otherwise — everyone has to learn. Life isn’t just about big, sweeping, transformative moments. It’s the in-between moments that matter most.

When I first started writing about my Appalachia Spring Break Extravaganza Blow Out, I texted our group chat, which is somehow still kicking five years after the fact. I asked if anyone had any memories to share and, within minutes, got a flurry of responses. The vivid image of my mud-encrusted Lululemons hanging in the makeshift girls’ “bathroom” all week. Watching the movie October Sky more times than we’d probably admit. The sound of Skrillex blaring to wake up the boys.

I went to Appalachia as a second-semester freshman, mostly sad and deeply homesick. (I have a theory that second semester freshman year is the worst because you no longer have football weekends and it also happens to be freezing and dark all the time). The only reason I went was because my friend Emily was set on going.

We loaded into the vans at 6 a.m. Saturday morning in a frozen-over D6 parking lot. It was an all-day drive to War, West Virginia, half of the group asleep in the back, the other half trying to make conversation with people we hardly knew. My brain was screaming at me: Why didn’t you go home? Why did you choose to go to the middle of nowhere with people you don’t know? Why is it so freaking cold still? Why, why, why?

Ten hours and a total ban on country music later, we were all fast friends because, as Patrick put it to me: “People are more weird, and hence more alike, than you realize.”

Of course, I didn’t know that at the time. I didn’t realize, at all, that most of what people expect out of you is just to be yourself, especially in situations like these. All I knew then was that every step I took or word I said added fuel to my generalized anxiety fire.

On our first day, to choose just one random example, I inexplicably fell into a lake. No one can remember how it happened, although if you know me at all, this tracks. Dearbhla says she turned around and all of a sudden I was mud-soaked. And humiliated, dripping and dirty in the midst of what would become my future most-embarrassing-moment icebreaker.

Later that night, we played a game of Mafia and I could not, for the life of me, remember Dearbhla’s name. The mortifying moment remains seared in my memory so vividly that I’m cringing as I write this. But unless she’s been secretly holding a grudge since that moment and the past five years of friendship have all been a ruse (improbable!), this was just a normal human error.

And without that, would I have made the extra effort to be her friend? Would we have ended up being neighbors in Ryan Hall two years later? Her, blasting “I’m Shipping Up to Boston” at 8 a.m. to wake me up every single game day? Me, sitting on her floor at 3 a.m., wailing about politics while she and her roommate tried to radicalize me? (Hey guys, it worked!)

The morning I left for the trip, one of my friends texted me to say, “Good luck, don’t die. The most manual labor you’ve done in your life is hanging up your O’Grady for President posters in 8th grade,” which is a little closer to the truth than I’d like to admit.

The point of going to Appalachia isn’t to display dexterity or anything, but it certainly would’ve helped if I wasn’t a hazard using the circle saw. At the sites where we worked during the week, where I struggled to even be marginally useful, I also laughed until I cried. Sure, learning teamwork and helping others was super-important, but stepping into the paint tin and splashing everywhere . . . or thinking we were out of gas because the car was turned off . . . that’s what I remember most.

During our week there, we stayed in an old school that had been turned into housing for groups like ours, run by a group of locals. Cots were put into classrooms, the gym was a general community area and the cafeteria was turned into our kitchen.

One afternoon before dinner, we were gathered in the kitchen being tortured by Pat’s insane riddle game. Little did we know, outside one of the vans actually could’ve run out of gas because Theresa and Mackenzie had accidentally left it running for hours.

One of the locals responsible for our housing popped his head in and said, “Uh . . . someone’s van is f---king running.” We doubled over in laughter.

It was those moments — and others not fit to print — that filled up our group chat when I asked for memories. It was the guitar brownie and the yams and the unsafe driving practices and the other inside jokes that everyone knows by shorthand.

Before I started writing, I texted a friend that there was no way I could do this without sounding cliché and stupid. She said no, absolutely not, it’s gonna be cheesy. Appalachia is an inherently cheesy experience. It’s designed that way. It’s incredible in that way.

And like I said, it would be disingenuous to deny that Appalachia changed my life. To do so would be to ignore one of the more meaningful conversations I’ve had, the night Emily, Patrick and I climbed up on to the roof of a broken-down school bus.

I pointed at the stars, using my entire half-semester of Astronomy 101 to explain the constellations — if you can find Orion, you can trace it to Sirius — and somehow transitioning into a conversation about how crazy it is that we were there doing what very, very little we could for a week before returning to our ivory towers. About how we got so lucky and what we have to do with that.

I had countless conversations like that over the next three and a half years, but it wouldn’t be until five years later, out living my life in the “real world,” that I realized just how much they meant to me. It typically takes years or some big, significant experience to build up the trust necessary for these deep, personal conversations. The farther away I get from the bubble of Notre Dame, the harder it’s been to build those connections. For a scared, cold, homesick freshman, it was the kind of conversation I so desperately needed — to feel less alone, more accepted.

So, sure, Appalachia changed my life. But more importantly, it changed my perspective on life, teaching me that it’s in those in-between moments where we really live.

Rachel O’Grady is a marketing analyst currently based in Atlanta.