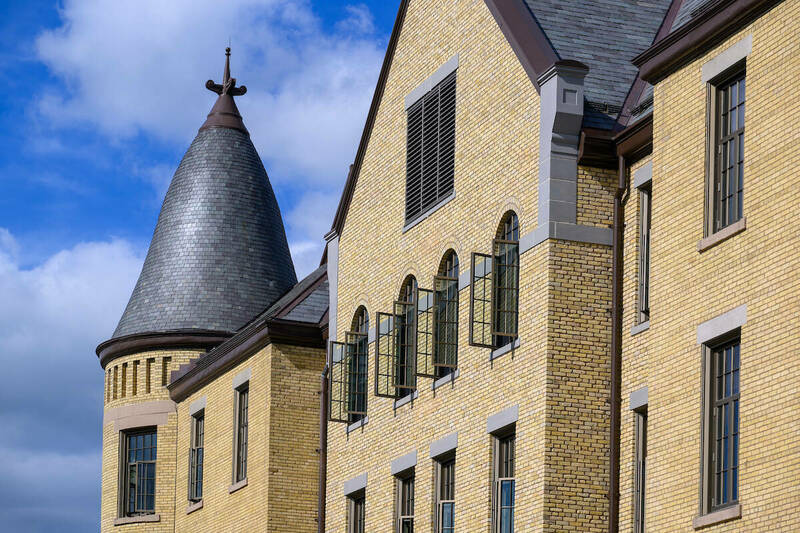 Students and visitors to campus this fall might not even notice it when they pass the west wing of Sorin Hall.

The building’s entirely new western section — faced with vintage yellow Notre Dame bricks — blends in so seamlessly that it looks like part of the original 19th-century residence hall.

Fresh off a year-long major renovation and expansion, the University’s oldest dorm built is ready for the arrival of students for the 2022-23 academic year.

The distinctive, 133-year-old building with four turrets on the Main Quad has a new central courtyard, accessible via an elegant arched walkway. And inside there is plenty of what was sorely lacking before: abundant study lounges, social gathering spaces, a hall office, an exercise room and two kitchens for residents (who are known as the Otters).

The hall chapel, dedicated to St. Thomas Aquinas, didn’t change dramatically during the renovation. The chapel ceiling was dropped slightly to accommodate air conditioning. (The hall’s common rooms now include air conditioning, although student rooms do not.)

Sorin now has an elevator, which replaced one of the building’s four-story staircases. The southwest corner turret room on the main floor — for many years a room traditionally reserved for seven sophomores — is now a quiet reading room for residents. It features comfortable sofas and deeply cushioned chairs, with no TVs or other electronic distractions. Just south of the building is a new shady patio.

The hall also has a new rector this year: Daniel Driscoll ’97M.Div.

A major goal of the project was to provide Sorin residents with the amount and variety of social, study and common spaces that are typical in other Notre Dame dormitories, Anthony Polotto, Notre Dame’s director of construction and quality assurance, said during a tour of the building.

The new three-story west wing encloses the courtyard and architecturally mirrors the rest of the hall. The addition is faced with yellow bricks made of clay from the campus lakes. (Shortly after Sorin's construction, leftover bricks reportedly were used to build The Lilacs, a house near campus for a professor and his family.) The bricks for Sorin's recent expansion were reclaimed during the demolition and replacement of Corby Hall and Brownson Hall.

“We had enough original brick to make the complete (wing),” Polotto says.

Observers would have to look very closely — the mortar is a bit thicker and the yellow bricks more varied — to see any difference between the old and new sections of the building.

Sorin Hall’s classic elements haven’t changed. The 19-foot-high ceilings on the main floor and the two front porch swings remain. The bronze sculpture of University founder Rev. Edward Sorin C.S.C. — which took to wandering off in earlier decades — is firmly bolted down in a prominent alcove just inside the front door. And Rev. Edward “Monk” Malloy ’63, ’67M.A., ’69M.A., the University president emeritus, has moved back into his longtime home in the northeast turret room on the main floor. (He’s lived in Sorin since 1979.)

Situated in a prime location just south of the Basilica of the Sacred Heart, Sorin Hall offers dramatic views through its large windows of the Main Quad, the Golden Dome and nearby Saint Mary’s Lake.

Despite the expanded common areas, the number of hall residents will remain virtually the same. Before the work, Sorin had 147 student beds. The renovated and expanded hall has 148 student beds.

The construction of Sorin Hall was a daring and controversial move for Notre Dame in the 1880s. It was the first residence hall with private rooms for individual students built at a Catholic college in the United States — an advancement some parents and visitors considered excessively permissive. The University previously had adhered to the French boarding school model, with students living in large group dormitories in the Main Building.

Sorin Hall was designed by the firm of Edbrooke and Burnham of Chicago. Willoughby J. Edbrook of that firm also designed the Main Building, Washington Hall and Science Hall (now known as LaFortune Student Center).

The ceremonial groundbreaking took place on May 27, 1888, during the year of Father Sorin’s Golden Jubilee, marking his 50th year in the priesthood. Originally to be called “Collegiate Hall,” the name was changed to honor Notre Dame’s founder. Construction proceeded rapidly, and the hall was completed by January 1, 1889. It contained 60 student rooms, and the Notre Dame Law School was based in the south section of the building.

“Sorin Hall, the home of the scholar, the resort of the student, was thrown open on New Year’s day, and the fortunate possessors of rooms, returning from their holiday vacation, found their new home ready for occupancy,” Scholastic magazine reported that month. The rooms “are large enough to encourage study and at the same time small enough to discourage visiting.”

Sorin Hall was reserved for juniors and seniors of all college departments, admission to it being a privilege for students of high scholastic standing and good conduct. No extra fee was charged for rooms.

The original building comprised just the front section facing the Main Quad. An 1897 expansion added the north and south wings, and the front porch was constructed in 1905. Known as the Colonel Hoynes Porch, it was designed to prevent student pranks, such as the practice of dumping water from upper-story windows onto unsuspecting students and faculty standing on the uncovered front steps.

William Hoynes, dean of the Law School, lived in Sorin Hall as a bachelor don, the term for unmarried male professors who traditionally resided on campus. Other dons who lived in Sorin at various times included: Edward Maurus, Charles Phillips, Paul Byrne and Paul Fenlon.

Sorin Hall has a long and illustrious pedigree. In 1908, young alumni John F. and Michael J. Shea, back on campus for a football game, reportedly used a piano in Sorin to begin composing the Notre Dame Victory March.

Past Sorin residents include famed athletics director Ed “Moose” Krause '34 and Heisman Trophy winner Johnny Lujack '48. Author John Bellairs ’59 lived in Sorin during his junior and senior years. Known for The House with a Clock in Its Walls and other books, Bellairs reportedly lived in the southeast turret room on the main floor both years.

Hall residents traditionally refer to their home as “Sorin College.” A wooden sign hanging above the front door announces that name. Hall residents who opposed the Vietnam War reportedly “seceded” from the University in the 1960s, declaring their home an independent “college,” and the name stuck. (There are references to “Sorin College” in campus publications as far back as 1965.)

The men of Sorin Hall will begin arriving August 19, move-in day for first-years and other new students. For upperclassmen, it will be a sweet homecoming after spending 2021-22 living temporarily in Zahm Hall while the Sorin work progressed.

There are many challenges to renovating and expanding a 134-year-old building. The architects and construction crew met those challenges in Sorin Hall and conquered them.

“She still looks good,” Polotto says of the landmark building, “both inside and out.”