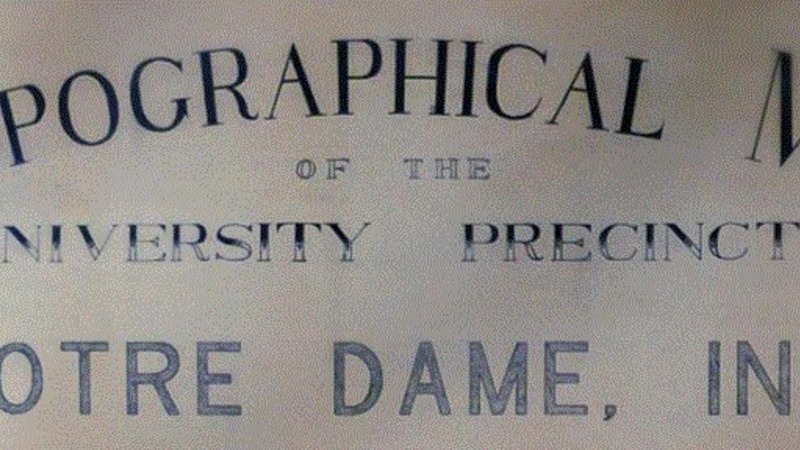 Come take a walk with me at Notre Dame of 100 years ago.

There’s the Main Building, just a few steps away from the infirmary and the campus natatorium. Railroad tracks curve along the eastern edge of St. Joseph’s Lake, extending to the campus heating plant behind St. Edward’s Hall.

You can zoom in and explore the map here: 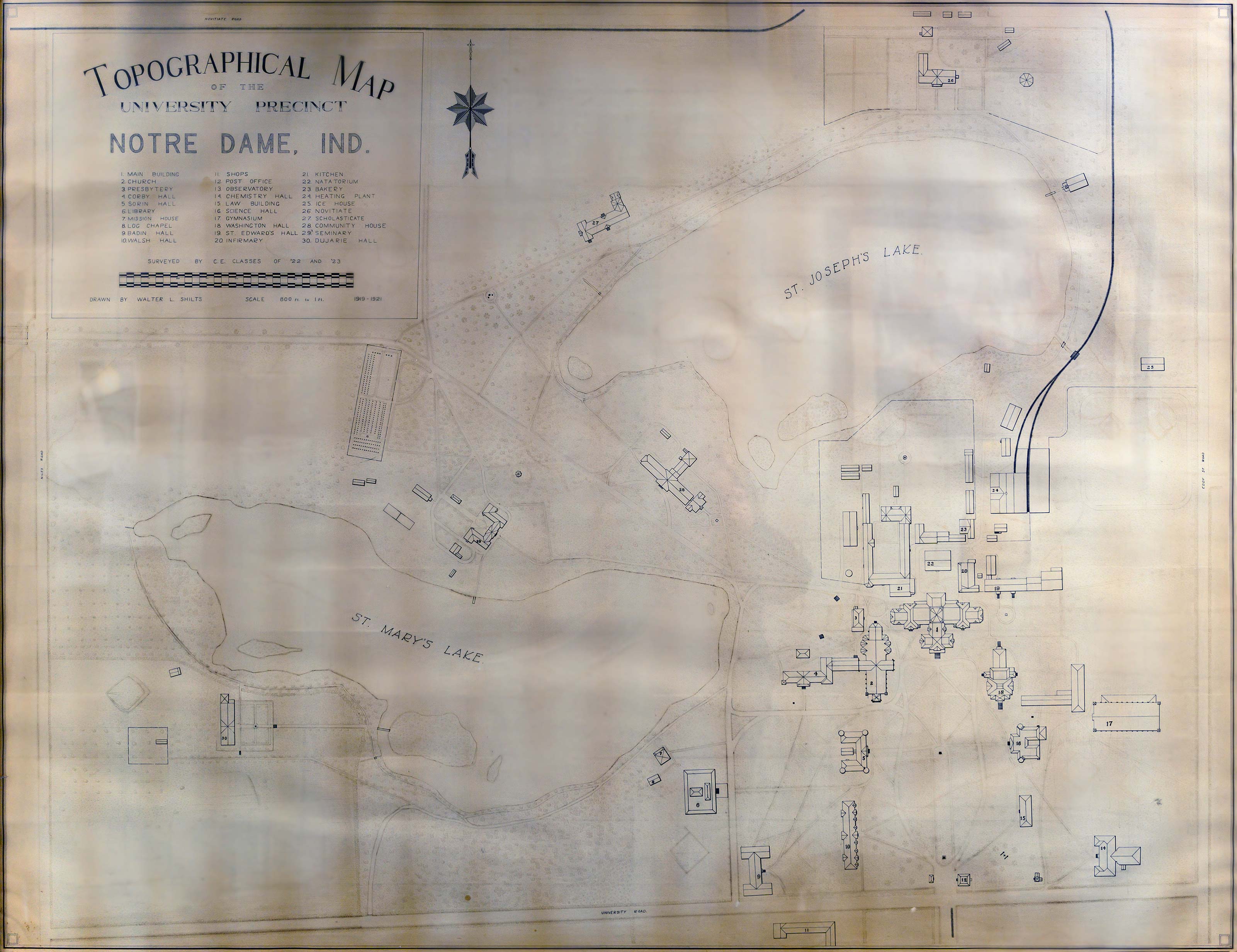 The hand-drawn diagram, dated 1919-21, offers the means for a virtual stroll across the University campus of a century ago.

The footprints of the campus buildings are recorded with precision in black ink. The map was drawn by undergraduate engineering student Walter L. Shilts ’22, ’24M.S. The buildings and grounds were surveyed by Notre Dame’s civil engineering classes of 1922 and 1923.

The map shows how compact the University was, and how far removed from the city of South Bend 100 years ago. The campus of that era was bordered by rural roads on all sides: Novitiate Road to the north, Eddy Street Road to the east, University Road to the south and the Niles Road to the west.

Thirty University and Congregation of Holy Cross buildings appear on the map, mostly on or near what is today the Main Quad and around the two campus lakes. (The campus of 2021 includes more than 160 buildings.)

The early residence halls are there: Sorin, Walsh and Badin. Washington Hall and Sacred Heart Church (known now as the Basilica of the Sacred Heart) are shown, too.

To the east is Science Hall, which has been LaFortune Student Center since 1953. Nearby is the Law Building, later renamed Crowley Hall.

An indoor swimming pool just north of the Main Building? The map shows a natatorium was there, and Notre Dame Scholastic articles report its existence as early as 1902.

Old College, the oldest building on campus, went by the name Mission House in those days. Nearby is the Log Chapel, a 1906 re-creation of an 1830s log cabin that burned down in the 1850s. The campus kitchen is northwest of the Main Building, attached to what was later called Brownson Hall (an early brick building that was demolished in 2019).

Just southwest of Walsh Hall — on part of what is now a grassy area of South Quad — is a large building identified as No. 11, Shops. Not shops in the retail sense, but rather an engineering hall that also contained workshops for students of Notre Dame’s Manual Labor School. Boys enrolled at the school were taught trades including tailoring, tinmaking, carpentry, machinery and mortuary services. (The building was struck by lightning and severely damaged in 1928, and no longer needed after Cushing Hall of Engineering opened in 1933.)

Chemistry Hall on the map is today’s Riley Hall of Art & Design. Missing from the map is Cartier Field, Notre Dame’s home football field from 1900 until 1928. It stood southeast of Chemistry Hall, on the opposite side of Eddy Street. Perhaps outlying athletic fields weren’t considered part of the “university precinct.” The Grotto, completed in 1896, isn’t on the map either.

A campus Post Office, no longer there, is shown just southeast of the Father Sorin statue. The campus Gymnasium is visible east of Science Hall. Later generations knew it as the Old Fieldhouse, torn down in 1983. The Fieldhouse Mall and Clarke Memorial Fountain stand there today.

The Congregation of Holy Cross Novitiate is shown high on a bluff above St. Joseph’s Lake, where Holy Cross House, a residence for older priests, stands today. The Scholasticate building is Sacred Heart Parish Center in 2021. The brick Community House mapped on the high ground between the two lakes now goes by the name Columba Hall. The Seminary marked on the hilltop beside St. Mary’s Lake later became Holy Cross Hall, an undergraduate men’s residence hall until it was torn down in 1990. On the southwest shore of St. Mary’s Lake is Dujarie Hall, then a house of formation for Brothers of the Holy Cross, and since 1967 an undergraduate men’s residence renamed Carroll Hall.

Walter Shilts, the talented undergraduate who created the map, went on to a long and prominent career at Notre Dame and in the local community. Shortly after graduating, Shilts was hired as a professor of civil engineering. He taught engineering, mathematics and physics at the University for 46 years, served as an assistant dean of the College of Engineering and chair of the Department of Civil Engineering. Shilts retired from the University in 1968, and co-founded Shilts, Graves & Associates, a South Bend-based civil engineering firm.

Shilts and his wife, Antoinette, had seven children, including a son who died in infancy. Another son, the Rev. James L. Shilts, CSC, ’49, ’61Ph.D., taught physics and worked as an administrator at Notre Dame, as well as serving as rector in Zahm, Farley and Carroll halls. He died in 1982.

Walter Shilts, 84, died in 1987 at his home in South Bend. In his memory, a Walter L. Shilts Award for Undergraduate Achievement is presented annually to a Notre Dame senior civil engineering student who has best fulfilled their potential through hard work and dedication to obtaining the best possible education.