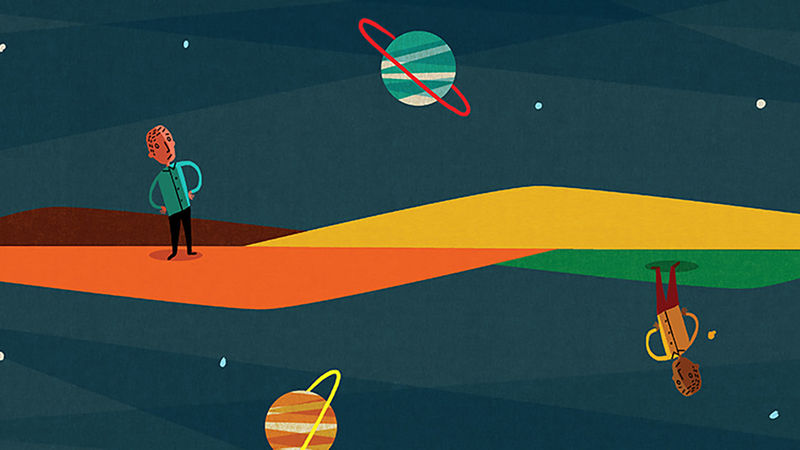 Here’s a simple fact of geography and physics: Relative to where I’m standing at my particular “you are here” dot on the planet, people in Australia are upside-down, sort of hanging off Earth, held there by the grace of gravity. If you’re anything like me, that’s both an obvious reality of a spherical world — they don’t call it “down under” for nothing — and a disorienting challenge to your intuition.

From the Australian perspective, perception of what’s up and down changes. They don’t feel like bats suspended from a galactic rafter. Defining what’s right-side-up, in human terms, depends on where you’re standing.

That’s only reality as we see it through our narrow viewfinders. The universe has no use for our illusions. The truth is out there.

People have been struggling to reconcile local experience and cosmic truth for millennia. In his book The Order of Time, the physicist Carlo Rovelli cites an unnamed, 2,000-year-old text that evinces ancient, freshman-philosophy-whoa-dude noodling toward a conception of what it means to live on an orb: “For those standing below, things above are below, while things below are above . . . and this is the case around the entire earth.”

So far this is all just an extrapolation from the most rudimentary truth in the Milky Way: We don’t just believe that we live on a globe. We know. But we don’t experience the sensation of somersaulting over the equatorial belly during a flight to Sydney, either.

Long story short: Reality is hard to imagine. Our minds can play tricks on us, conjuring sounds and images that might not actually be there. A howling wind or a creaking floor has the power to startle the senses into suspecting a supernatural presence. Science operates on our minds in almost the opposite way, revealing natural structures so esoteric that we struggle to accept that they could be real. It’s easier to picture phantoms than photons.

In sensory experience, we’re all flat-earthers. What we see, whether from here to the horizon or within our limited range of the visible spectrum, adds up to only a vanishing fraction of reality. To uncover the rest requires advanced equipment — intellectual and technological.

If centuries-old discoveries strain my brain, what hope do I have of comprehending the complexities of modern physics, the discoveries that seem only to deepen the mysteries of the universe? As research opens humanity’s eyes to truths hidden beyond our field of vision, new knowledge often blurs our understanding further.

Trying to picture the workings of the natural world’s invisible depths, the physicist Richard Feynman once said, “our imagination is stretched to the utmost.” Past that, in fact — speaking for myself — until it snaps like a rubber band.

What we’re able to detect with high-tech tools surprises even the most farsighted thinkers. “The more powerful our telescopes, the stranger and more unexpected are the heavens we see,” Rovelli writes. “The closer we look at the minute detail of matter, the more we discover of its profound structure.”

The evident delight Rovelli expresses for exploring the immense, mysterious realm of space-time is contagious, stirring a spirit of adventure that transcends the struggle to understand, encouraging me to tiptoe toward the outer limits, past the known universe into the unknown. And almost everything is unknown. That’s the thing.

Most of the energy and matter in the universe — more than 95 percent, by one educated estimate — is called “dark” in part because that’s what we’re in when it comes to understanding it: the dark. The stuff everything is made of, the measurable atomic weight of the stars, the planets, the people, all the particles in the Standard Model of physics? That all amounts to less than 5 percent. 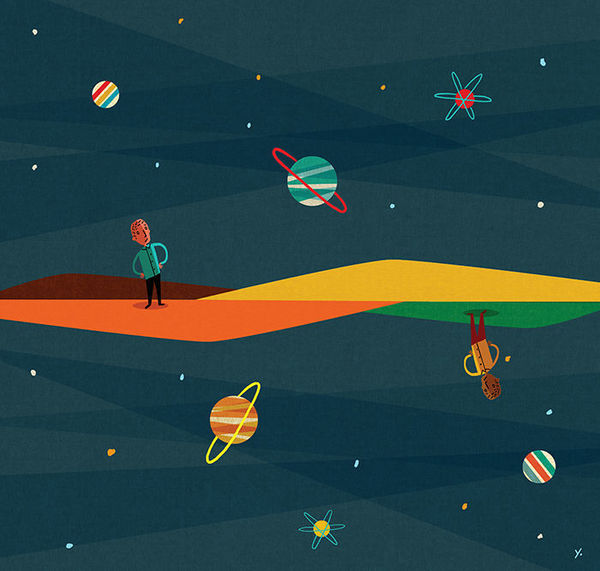 Dark matter, meanwhile, is an unseen form of gravitating material employed in astronomical equations to explain other unexplainable phenomena. Such as the fact that stars at the outer edge of galaxies, which should orbit more slowly because of a reduced gravitational pull, instead move just as fast as those near the center, indicating that they must be interacting with . . . something else. “In a sense,” the University of Amsterdam theoretical physicist Erik Verlinde told Gizmodo, “dark matter is a placeholder for a thing we don’t understand yet.”

A newer theory, called dark fluid, posits a unification of dark matter and energy — thought to be unrelated other than their names — as components of a single phenomenon. Oxford astrophysicist Jamie Farnes introduced the idea that properties of both dark matter and dark energy could be present in a substance with negative mass, an arcane theoretical concept. Think of it like this: If you pushed an object with negative mass, it would accelerate toward you, rather than away from you.

In a Space.com article describing his research on dark fluid, Farnes acknowledges that the concept of negative masses is “bizarre,” but adds in the next breath, “they are considerably less strange than you may immediately think.” The likes of Albert Einstein and Stephen Hawking considered negative masses a serious possibility. While the model Farnes developed advances the idea, he feels compelled to address the question his dark fluid theory raises: “Is the universe really this weird?” Based on what we know so far? Maybe.

But wait, there’s more. Dark flow (unrelated to the preceding opacities) is the name for a controversial theory of a mysterious, uniform motion of distant galaxies. Controversial because, as NASA puts it, “the distribution of matter in the observed universe cannot account for it. Its existence suggests that some structure beyond the visible universe — outside our ‘horizon’ — is pulling on matter in our vicinity.” Perhaps another universe, in a “quantum entanglement” that occurred as ours emerged out of the big bang. NASA astronomer Alexander Kashlinsky, who led a study that found that the distance of this flow extends much farther than previously believed, reported the discovery almost apologetically, saying that the researchers didn’t go looking for it, “but we cannot make it go away.”

Sort of like Mad Libs, the darks — energy, matter, fluid and flow — fill in blanks and introduce new oddities into the universe. Whatever might be hidden in the incomprehensible expanses of stardust remains unknown, and these concepts represent existing portals to knowledge. Something is out there. Maybe someday we’ll know what.

Even the things we know with relative certainty boggle the mind, quantum mechanics most of all. A theory advanced through centuries of the deepest thought and most precise experimentation, quantum mechanics focuses on the smallest parts of all matter, which do not behave in a way we would accept from our children anywhere outside of a Chuck E. Cheese’s. 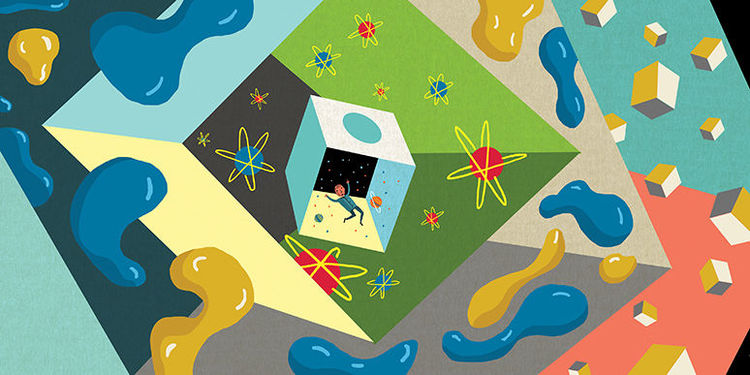 Subatomic particles participate in a constant dance of random interactions. If we could see down to such an infinitesimal scale, we would find “a continuous fluctuation,” Rovelli writes in Reality Is Not What It Seems, “a microscopic swarming of fleeting microevents.”

That seems apprehensible enough, an agitation of smaller parts combining into a larger whole that we can see and touch. Lots of imperceptible buzzing around and colliding going on down there. Subatomic bumper cars. Got it.

Things that possess a superficial permanence are really a roiling boil of oscillating particles, objects held together by invisible “events” of varying duration. For Rovelli, those events are the essential units of nature, not the objects that arise from them. “A stone is a vibration of quanta that maintains its structure for a while,” Rovelli explains, “just as a marine wave maintains its identity for a while, before melting again into the sea.”

Weird as all this seems, up to this point, quantum mechanics still feels somewhat within my mental reach, which almost by definition means I don’t get it at all. In the words of Feynman, who was as much of an expert on the subject as it’s possible to be, “I think I can safely say that nobody understands quantum mechanics,” an oddly comforting sentiment as I wade in deeper over my head.

During that same 1964 lecture, Feynman cautioned his Cornell University audience to avoid getting hung up on the why or how of the strange facts he was about to report. Quantum mechanics, he said, was like nothing anyone in the auditorium could fathom — including himself, I took him to mean. To get at it requires releasing ourselves from what he called the “perpetual torment” of resisting the evidence of this underlying reality because it’s so foreign to the function of things in front of our faces. “I’m going to tell you what nature behaves like,” he said, “and if you will simply admit that maybe she does behave like this, you will find her a delightful, entrancing thing.”

A strange and all-but-impenetrable thing, too. Electrons, for example, do not exist in and of themselves, but only through interaction with something else. An electron might be here, then there, in collisions with other particles, but it cannot be said to have been anywhere in between those two events, as if it was beamed Star Trek-style from one place to another. I’ll let Rovelli explain it: “They materialize in a place when they collide with something else. The ‘quantum leaps’ from one orbit to another constitute their way of being real: an electron is a combination of leaps from one interaction to another. When nothing disturbs it, an electron does not exist in any place.”

Where these vanishing and reappearing electrons move is random. Physicist Paul Dirac developed an equation that has been the abstract apparatus supporting quantum mechanics for nearly a century. The calculations yield only probabilities — not because that’s all we can suss out based on current knowledge, but because that’s all there is. At this level of existence, there’s no such thing as certainty. “The apparent determinism of the macroscopic world is due only to the fact that the microscopic randomness cancels out on average,” Rovelli writes, “leaving only fluctuations too minute for us to perceive in everyday life.”

Einstein admired Dirac for maintaining “an equilibrium along this vertiginous course, between genius and madness,” which seems like exactly the balance anyone properly acquainted with quantum mechanics — or any number of other scientific enigmas — would have to strike. The rest of us can spin around the carousel until we get too dizzy, then hop back onto the terra firma that passes for our reality.

Taking the ride, Rovelli enthuses, introduces us to a wondrous view of nature far beyond the confines of our consciousness, an encounter with creation at its essence, with fundamental truths “more real than our clouded daily dreaming.”