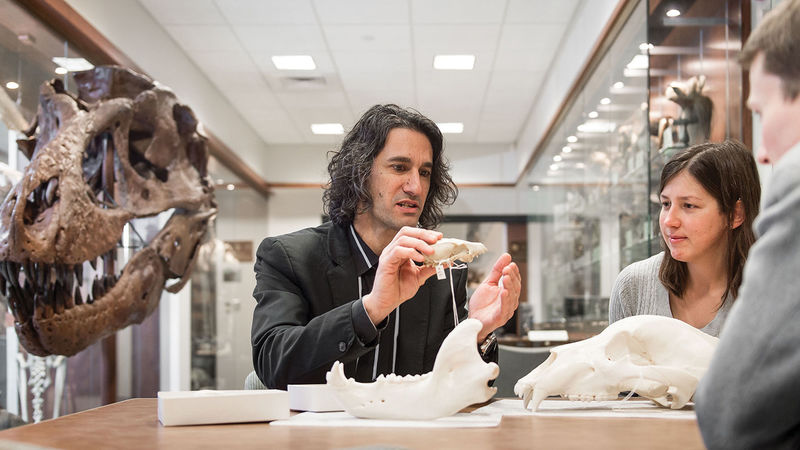 The capacity to see beyond what’s in front of our eyes has shaped humanity in profound ways, says Agustín Fuentes, the Rev. Edmund P. Joyce, CSC, Professor of Anthropology. And, adds the author of The Creative Spark: How Imagination Made Humans Exceptional, beliefs that stretch the imagination reveal a key aspect of what it means to be human.

“When we talk about belief like these weird, crazy things — fairy tales and ghost stories and stuff like that,” he explains, “we laugh at them and we think that’s funny how the mind can be tricked. But it’s not really about the mind being tricked. It’s about our capacity to develop, to imagine and to commit to those imaginings. And it doesn’t mean they’re not real or true. A lot of people talk about belief as being fooled by a lie. That’s not what we’re talking about. It’s the capacity to come up with ideas or be inspired by ideas and commit to them fully.”

Fuentes, who is working on a new book, says the fossil record shows humankind’s capacity for belief increasing over time. Between about 2 million and maybe 500,000 to 400,000 years ago, he says, our ancestors’ brains doubled in size. Since then, the brain hasn’t gotten any larger, but there’s been a shift in its shape and complexity, leading over time to an accompanying growth in art, complex tools, human migration and the development of trade.

At some point, he suggests, our ancestors looked at stones and saw they could be fashioned into something more. “Their capacity to see in a stone another shape — that’s not there, you have to make it — that kind of belief, that kind of commitment to the ability to imagine, and to make those imaginings real, that’s really impressive,” he says. “And we forget how much of everything that we take to be human is just totally grounded in our capacity for belief.”

This growing capacity has empowered us, enabling us to fashion increasingly complex realities, from tools and towns to cities, nation-states and modern economies. “We believe in them, thus they are real,” Fuentes says. “Money only works because we believe in it. These are complex systems and they’re completely real and dynamic, but we completely believed them into being, as we have so many things.”

The anthropologist continues, “My whole interest in belief emerged from my interest in the development of human capacity for mental representation — for imagination, for creativity. I did all this work looking at human evolution and looking at the archaeological record, looking at our bodies, looking at the ways our brains and bodies function together, both inside us and as individuals interact — all of this really good anthropology and science.

“But what struck me is that all of these different pieces individually didn’t get me close to really good answers for these broad-spectrum changes we see in human history and in humans today. And so that’s when I started looking at some of the philosophical and anthropological and psychological literature on belief and then realized that there’s something more — creativity, imagination, neurobiological functioning, technology — all of those things are undergirded by this capacity to believe.”

Our unique ability to believe in things beyond our senses has fostered the ability to create, and that has led to a search for meaning in the world we encounter and shape.

“Every human society, today and in the past, even the deep past, always exists in a meaning-laden universe,” Fuentes says. “And so, the power to believe in things — ideas, or ideologies or possibilities — enables us to navigate complex, meaningful landscapes.

“What it means is that when we look at the world around us, everything is learned and acquired, but also material and real. Yet it’s never just what’s in front of us, what we can touch or see or hear or experience, that matters to us.”

One critical element, Fuentes suggests, is a group’s commitment to a belief and the unifying principle of that belief. Some cultures, for example, may believe that spirits reside in a tree. Fuentes says seeking the distinction between superstition and belief is “not the right question.

“Does everyone in this society wholly know that there’s a ghost in that tree? Yes, they do, and they behave accordingly.”

Similarly, we may say, “knock on wood,” and rap our knuckles on a table. While some may call it superstition, Fuentes says, “that doesn’t mean it’s fake. Most people I know knock on wood, and it means something to them.” For many people, he says, this simple ritual helps them relax and think positively about a possible outcome.

For Fuentes, ghost stories are “about ancestors or dead individuals who we say are coming back or are still around. Is that totally impossible? Everyone we’ve known is actually materially part of our mind, part of our neurons, the neuronal systems in our brain, and our experiences. And so what if . . . some individuals have the sensation — the honest and heartfelt sensation — that all of those experiences manifest themselves in ways outside of our body as well?”

Such beliefs reflect on us as human beings; they carry meaning. “To be human is to believe,” Fuentes says. “It’s also a compulsion, because we want to believe, we want so much to find things to invest in, to really commit ourselves to.”