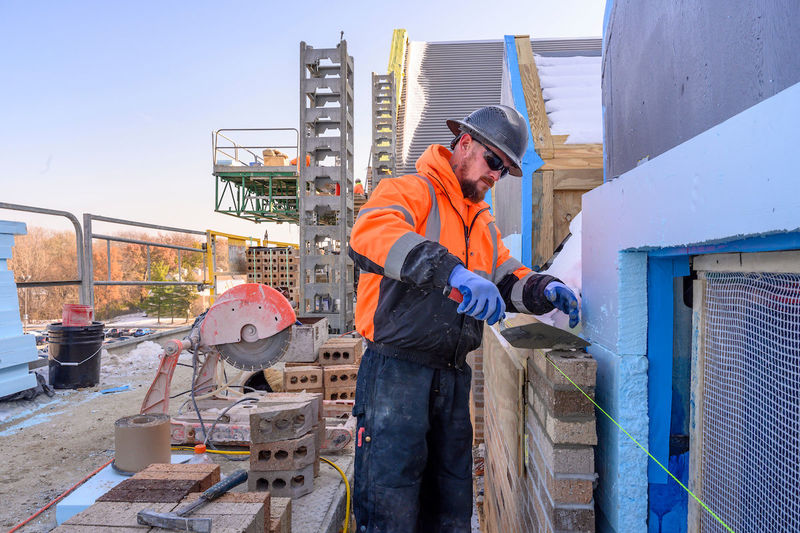 Like everyone else at Notre Dame on this day, Joe Winters feels the cold.

Less than halfway through November, the daytime temperatures are just above the single digits. Winters is finishing his lunch break inside one of the heated construction trailers outside Johnson Family Hall on the northeast side of campus. Notre Dame’s newest women’s dorm is expected to open in August 2020, but only after Winters and his fellow masons move tons more blocks and bricks.

Hands like his, roughened by two decades of scraping against stones — “Man hands, we call them,” Winters says, chuckling — have built Notre Dame. When Father Sorin came to this swamp in 1842, one of the first lessons for his entourage of Holy Cross brothers was how to make bricks out of lake mud. Their efforts resulted in the Old College building, which still stands across from St. Mary’s Lake.

The lake’s mud also provided the amber-honey color scheme for the oldest landmarks on campus — Sacred Heart Church in 1871, the Main Building and Washington Hall in 1879, the Science Building (now LaFortune) in 1883.

Throughout its history, whenever the university had enough money to expand, bricklayers were hired to help create dormitories, dining halls, athletic facilities and classroom buildings. If you’re looking for details, check out William Reifsteck’s 2012 book, Two Million Bricks in 160 Days. Mainly, it’s about the 1930 construction of the football stadium, but it’s also a good resource if you’re curious about the university’s history.

One message in Reifsteck’s book is that there is little room for error when you’re a builder with a deadline. For the original stadium, basic math says everything needed to be in place so 15 masons could lay 800 bricks each every day for interior work. For the stadium’s exterior, where better bricks and finer detail were required, the daily quota was 500 bricks.

If this makes you a little curious, you can learn a lot about the basics of masonry in 7 minutes and 44 seconds by viewing “Bricklaying Is Easy” on YouTube. If you want to get serious, like Winters, you should take a one-year course at a trade school followed by a couple of years as an apprentice.

Be warned that a lot of drudgery accompanies the job. Particularly when you are new, he says, you spend a lot of time pushing wheelbarrows or rubbing rough spots off the finished walls. There is only a slight resemblance between creating a backyard barbecue pit and working with a team on a three-story dormitory wall that extends several hundred feet. Winters can’t rub a little dirt to hide a mistake on the Johnson Family Hall exterior.

This need for perfection can be a curse. When he’s with his family at a local restaurant, he often will notice one brick just slightly out of place on a wall someone else built. He can’t help it. It almost ruins dinner for him, Winter says.

It’s been nearly a century since the project Reifsteck describes. In that time, technology has made it easier for almost all the other trades, but Winters’ value still depends on man hands. “You have people with lightning-fast hands and you have people who work slow and steady,” he says. “The fast guys might do 800 to 1,000 a day but the usual average is closer to 300 to 500.” He falls somewhere in the middle.

Each brick weighs close to five pounds, and behind the bricks are cement blocks. The good news is it takes fewer blocks to make a wall; the bad news is that each block weighs almost 10 times as much as a brick.

“There’s a lot of chronic lower back pain,” he says. “You get a lot of tendinitis, a lot of carpal tunnel.”

None of this came as a surprise. Winters is a third-generation mason — his father and father’s father had the same aches. “They tried to talk me out of this,” he says. “It’s a grueling trade.”

Winters admits he didn’t research a lot of career opportunities 20 years ago at Argos Community High School about 30 miles south of South Bend. His favorite subject there was daydreaming, and he knew he would rather build a classroom than sit in one. It pays well. “Straight out of high school, this is one of the most rewarding jobs you can get,” he says. 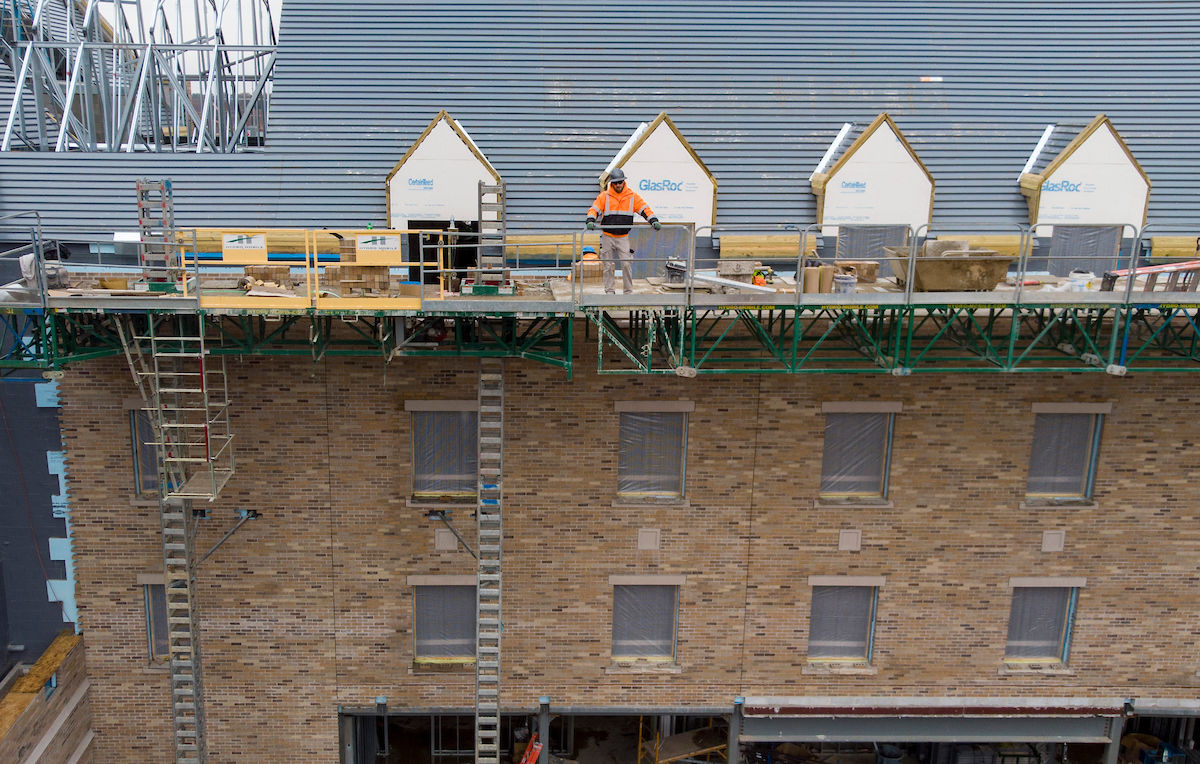 Winters with some of his handiwork. Photo by Barbara Johnston

He quickly gathered skills at smaller jobs and started building a career. Then about 10 years ago, during a downturn in the construction industry, many of his co-workers left the bricks behind and took factory jobs. Stubbornly, Winters kept busy with smaller renovation projects. When Notre Dame began its latest building boom and needed brickmasons pronto, he was ready.

His first on-campus work was on the Morris Inn makeover in 2013. Because of the urgency to get Notre Dame’s premium lodging option done, masons worked in two shifts, so Winters was working nights.

When that project was completed, a steady stream of campus assignments followed. The largest was the Campus Crossroads, which began in November 2014 and was largely completed in January 2018. Three huge buildings — Duncan Student Center, O’Neill Hall and Corbett Family Hall — were attached to Notre Dame Stadium, adding some 800,000 square feet of space for classrooms, performances, research and student activities, as well as premium seats for well-to-do football fans.

It was the largest building project in Notre Dame history. According to Doug Marsh, university architect and vice president, during the busiest months in 2016, some 1,200 construction workers were employed.

The pace is calmer now but work hasn’t stopped. On most days, Marsh says, some 200 construction workers are spread across campus. Current work sites, in addition to the new Johnson Family Hall, include the replacements of Corby and McKenna halls, the renovation of Dillon Hall and construction of an improved Robinson Community Learning Center at the south end of the extended Eddy Street Commons.

In some ways, these construction workers are the face of Notre Dame’s march toward the future, and in other ways they are not. When alumni return for reunions or football weekends, their eyes likely are drawn to the cement trucks and scaffolds instead of student diversity and classroom innovations.

However, workers like Winters know they are separate from the main body. He is not employed directly by the university. He is a member of his trade union, hired by Leidal and Hart Mason Contractors. And during work hours, he and his co-workers are penned up behind temporary construction fences and have almost no contact with students or faculty.

That’s OK with Winters. He’s a Notre Dame fan — but of its buildings, not its academic programs or its sports teams.

On this day, work at Johnson Family Hall is being done indoors. A building’s basic shape is there, but you have to close your eyes and dream to see any beauty. With cement blocks instead of bricks, everything is the same dirty gray.

It’s still a long way from its opening next summer. Soon after the bricklayers finish giving the new dorm an attractive face, Winters will be off to another project, unlikely ever to return to Johnson Family. He’ll probably never stay at the Morris Inn or watch a football game at the stadium. It’s like his graduation from Argos High. You finish and move on.

He now lives in Bremen, Indiana, a 20-mile drive to work. He likes that he’s surrounded here by great architecture — from the older days of Sacred Heart, the Golden Dome and the Hesburgh Library to the gleaming newer work on the campus perimeters.

His favorite place? It’s the stadium project where he moved the most bricks. “We call it the coliseum,” he says. “It’s just so massive, and I know what went into it.”

Working here gives him a sense of belonging. “If you say you’re from Bremen, people will say, ‘What’s that?’ But if you say you work at Notre Dame, everybody knows,” he says. And pride. “This is some of the fanciest work you’ll ever do. If you’re working on a bank building, it may not be there in 20 years. This will be here.”

His break time over, he’s preparing to return to the gray cold inside Johnson Family Hall. This will not be a fun afternoon. Like his father and grandfather, he isn’t recommending this profession for the next Winters generation.

“I’ve got three little boys,” he says. “Right now, they all want to be a builder like Daddy.”

And maybe part of that is his fault. “Sometimes if we’re out to eat on Grape Road, I might drive the kids by,” he admits, “so they can see what their daddy’s done.”