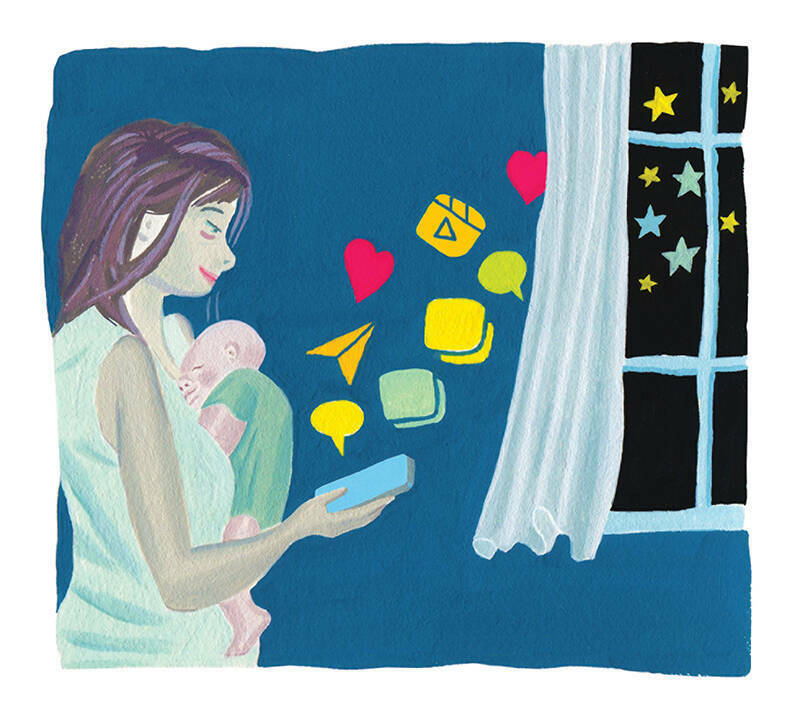 A cry comes from the room next door. The soft whimper turns into a roar. It’s 4:03 a.m. Not again!

The whining won’t stop and the despair creeps in. My daughter is hungry. Only one thing will make this end. I’ve got to get out of bed.

As we start the late-night feed we both should’ve outgrown by now, I remember what day it is and feel less alone. I open Instagram and go to the account that’s become a lifeline of sorts for new mothers.

Forget Bridgerton or The Bachelor. This must-see show is better than Schitt’s Creek. It’s New and Gold’s “Tuesday Takeover,” and it happens every week.

Each Tuesday, a Notre Dame or Saint Mary’s alumna pulls back the curtain on her life, posting photos and videos that take followers through her day — the good, the bad and the all-too-relatable moments of frustration. But also, the successes. And every step of the way, the New and Gold community is there to cheer her on.

Doctors, lawyers, businesswomen, stay-at-home moms and others weigh in from all over the country. No topic is off limits. Breastfeeding battles? Marital challenges? Overwhelmed by work? Don’t even get me started on sleep schedules. . . .

New and Gold was created by moms for moms in February 2020, just as the pandemic was about to overwhelm and isolate so many of us. Co-founders Jane McGraw Adler ’13 and Rachel Guerrera Creighton ’10 launched it to stay in touch with a dozen other women. Now, more than a thousand belong. They say the timing was providential.

“I think that was just kind of God’s work,” Adler says. “Having this during the pandemic was so huge for us and, as we found out, so many other people.”

The group started as a private Facebook account — a “safe space” where mothers or soon-to-be mothers could ask each other questions and get advice. Hundreds of posts now fill the page touting the best baby products, the most comfortable mom jeans, even job opportunities.

The group gets into heavier topics, too.

“We’ve had moms who’ve shared about their postpartum anxiety and postpartum depression, and the next thing you know, they’re messaging, they’ve now connected and they’re supporting each other outside of this group,” Creighton says.

Moore was honest about the struggle of balancing such heavy emotions with trying to raise a young son, and she got an invaluable gift in return.

Women come to New and Gold’s Facebook page with a shared passion for God, country, Notre Dame — and keeping things real, as the account bio says.

Over the past two years, it’s snowballed in popularity. To keep the momentum and connection going, Adler and Creighton added the Instagram account and a monthly newsletter.

In August 2020, that newsletter tackled an issue many women face with feelings of despair, hope, angst and joy: fertility.

As they wrote in their letter from the editors, “There’s this unfortunate stigma associated with it, like there is some sense of worth associated with your ability to reproduce. . . . A mom is a mom no matter what way they become one.”

The issue included stories from alums who have faced miscarriages. Some who made the tough choice to start and stick with in vitro fertilization. A mother whose journey involved an egg donor. And some who have been blessed with adoption.

The essays got a resounding response.

“That’s when we thought, ‘OK, this is bigger than we thought it was going to be,’” Adler says.

In April, they launched a website, the-newandgold.com, where they hope to inspire, encourage and support mothers with posts about faith and family — even finances. It offers moms the opportunity to connect and gives them a second chance to form friendships with women they may have seen around campus but have never properly met.

There’s no competition, just camaraderie. It’s the sisterhood of motherhood.

Maggie Cure, a stay-at-home mother of five, says the community reminded her how lucky she is that she stepped onto the Saint Mary’s College campus 14 years ago and is now surrounded by women who are cheering each other on for life.

She did a “Tuesday Takeover” in February showing how she and her husband, Dexter ’10, ’11 M.S., raise and homeschool five beautiful children.

“I was interested to see what feedback we’d receive as a homeschool family, since it’s not the most common school route to take. However, I was blown away by the amount of sweet responses,” Cure wrote in an email.

“It was no surprise that everyone was supportive, but it was a surprise how many moms felt they had been called to homeschool but didn’t feel ‘good enough,’ or had bought into the fear society had sold them on everything their kids would ‘miss out on’ if their education didn’t take place inside of a building. All they needed was one mom to say, ‘Hey. I was scared, too, but I took the leap and could have never imagined the graces that came from it.’”

Cure, who was a second grade teacher before she decided to stay home with her children, has become a homeschooling influencer of sorts. Her Instagram account, CountingCures, has nearly 55,000 followers.

“Tuesday Takeovers” don’t just benefit the people watching from the wings. The mom sharing her life also receives a benefit.

Rachel Pollard Moore ’12 knows that well. She did a Takeover of New and Gold’s Instagram account in February — seven weeks before her mother, Laurie, passed away from brain cancer.

She almost backed out of doing it but now is grateful she did it.

“I received so many messages from people that were either going through something similar and were having challenges with how to handle it . . .  and then also people that were through it,” she says.

“What I heard back from people was so kind and loving, and in the midst of that, we have to be lifted up,” she says. “You tend to try to do it alone. . . . I think it’s our nature to just figure it out. But we can lean on others.”

Moore’s Takeover was emotional and raw. She talked about something many of us fear: dealing with impending loss. She was honest about the struggle of balancing such heavy emotions with trying to raise a young son, and she got an invaluable gift in return. One of her biggest fears, she says, was that her 1-year-old son, Christian, wouldn’t remember how wonderful his grandmother was after she died.

One follower gave her the idea to record her mother’s voice on a device that could be sewn inside a stuffed animal so her son could have it with him the rest of his life.

Moore went to the mall with her mother that weekend. “It was such a ‘God moment,’” she says. “The weekend before my mom went in for her scan where they found a tumor, we went to Build-A-Bear. . . . So my mom, despite her brain not totally being there, was able to get a message across.

“Christian still calls it the ‘Mimi’ bear. It was such a beautiful gift that this person gave me.”

While Moore admittedly hates social media, she says New and Gold is different. “There’s something empowering about this group in particular,” she says. “It’s a connected group of people that actually care. And I think there’s a power then behind social that we normally don’t see.”

While members are happy to jump in and offer solutions the moment problems arise, New and Gold offers something more important: solidarity. Sometimes we need to remember we don’t have to go at this thing called motherhood alone. It’s OK to lean on others. And who better to lean on than the Notre Dame community?

One final pro-tip from the New and Gold moms: If your baby won’t calm down in the car, play Imogen Heap’s “The Happy Song.”

It hasn’t failed this mom yet.