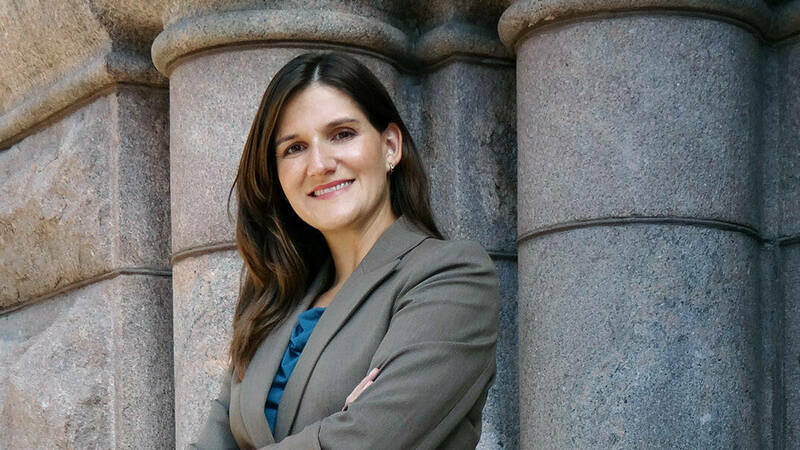 Linea Palmisano ’98 didn’t aspire to politics. Growing up in Chicago’s western suburbs, she wanted to be a physician. But her desire to serve — which carried her through premed classes as an undergraduate at Notre Dame — eventually landed her on the Minneapolis city council, where she’s served eight years and is now council vice-president.

“It’s about service for me, not politics,” she says.

Her ideals have persevered, even as the death of George Floyd under the knee of a Minneapolis police officer two years ago made her chosen hometown Ground Zero for the nation’s reckoning with racial injustice.

Palmisano remained a voice of reason amid the turmoil in the city and on the council itself and won reelection last fall. She emerged with a renewed commitment to serve. “Now it is about, ‘How do we remove racism from our society and government?’” she says. “This is an important opportunity, with Minneapolis in the spotlight, to show the capability of its people to change for the better.”

High aspirations have driven Palmisano, now 45, throughout her life. When she was 9, her family stopped to walk Notre Dame’s campus on the way home from a summer vacation, and the young Catholic decided the University would be the place for her.

“Everything I did was toward that goal, to go to that school,” she says.

In high school, she drew inspiration from her cross-country and track coach, Mary Ellen Mazza ’87. “I became the Rudy of our cross-country team,” says Palmisano, with a nod to the film that came out her senior year. She laughs. “I was no good.”

But she was good enough as an athlete to run competitively for two years at Notre Dame, where she also found service opportunities in organizations like one that delivered leftovers from the dining halls to homeless shelters. And she met new mentors who pushed her to keep stretching herself.

Palmisano volunteered with the University’s First Aid Services Team (FAST), a student-run group supervised by the Notre Dame Fire Department that provides first aid as needed at larger campus events. The woman who ran FAST encouraged Palmisano to become an emergency medical technician. She took that advice and eventually led the unit herself. “Padre Don” — the late Father Don McNeill, CSC, ’58 — then the faculty resident in Knott Hall,was another influence. He often asked the young women who attended Sunday night Mass in Knott’s chapel to offer a reflection on the readings. “He believed strongly in women,” she says. “That started me on the feminist track as a female in these male-dominated worlds.”

By senior year, she had seen enough in her work as an EMT to become disillusioned about shortcomings she saw in the American health care system. She couldn’t summon the motivation to spend eight years in medical school, residency and fellowship. Instead, she took a job with IBM Global Services’ data recovery team. After a stint in Cleveland, she was transferred to Minneapolis, where she helped coach runners at Southwest High School.

At Southwest, Palmisano started to meet undocumented students, who seemed to gravitate toward the cross-country and track teams and — in the days before DACA, the federal Deferred Action for Childhood Arrivals program — became absorbed in their plight. Even as she was working on her graduate business degree in strategy and entrepreneurship at the University of Minnesota, she began helping these students sign up for ACT tests and apply to colleges or trade schools. She fed them and even gave some money toward tuition. Before long, she founded NAVIGATE, a nonprofit, immigrant college-access program. “I was determined to show these kids there was a way for them to make it,” she says.

Soon the demands of a new job at UnitedHealth Group made it difficult to leave early for the 3 p.m. practices, so she gave up coaching. Instead she volunteered to serve on the Linden Hills Neighborhood Council, which — among other things — puts on an annual community festival and supports compost collection. Soon, Palmisano was the council’s board chair, leading discussions with residents concerned about traffic and other issues when a chain drug store proposed to move into the neighborhood.

In 2013, when the city’s Ward 13 councilmember, Betsy Hodges, decided to run for mayor, members of Women Winning, a Twin Cities organization committed to breaking down barriers that prevent women from engaging in the political process, asked Palmisano if she’d consider running for the position. She declined. A self-described shy introvert, she couldn’t see herself campaigning, and she had a young son. But when others pressed her to run, Palmisano relented.

She won that first election and discovered that local government fit her ideal of service. “This is where you get to have an impact more readily,” she says. “How do we change the world to be more fair and equitable in our city?”

There were no easy answers to that question during the summer of 2020, in the days following Floyd’s murder. Protesters thronged Minneapolis’ streets. Radicals — many entering the city from elsewhere — incited violence. Vandals looted stores and torched the police department’s third precinct offices. Fire trucks could not reach all of the burning buildings. Rumors circulated about attacks targeting individual homes. Nervous residents followed city-issued directives to hide garden furniture that could be thrown through windows and to hose down their houses to prevent them from being set on fire.

Meanwhile, tens of thousands of calls poured daily into the city’s 311 information number. Hackers shut down municipal computer systems. Overwhelmed city officials scrambled to respond on all fronts. Palmisano herself received 25,000 emails that first week as protesters turned her yard into a graveyard of fake headstones bearing the names of alleged victims of police violence. “It was hell, like being a 911 operator on my cell phone from my house for a week,” she says. “This was 100 times as big as anything I’d been through.”

Amid the chaos and crisis, nine of Minneapolis’ 13 council members pledged to defund the police department. When Mayor Jacob Frey was put on the spot at a rally and said he did not support defunding, the crowd chanted, “Shame!” Throughout, Palmisano retained her calm, calling for reform guided by deliberate analysis and considerate discourse. The debate continues today, reignited in February when Minneapolis police, acting on a no-knock warrant, shot and killed Amir Locke, a 22-year-old Black man.

Last November, the city seemed to follow the course she’d charted. Minneapolis residents elected seven new councilmembers, favoring more diverse candidates and trending away from the defund-the-police agenda with an emphasis on other measures to improve public safety. They also turned down a ballot referendum to replace the police department with a Department of Public Safety and passed a measure to streamline city government, centralizing authority in the mayor. The latter law enables the city to operate more efficiently.

In the meantime, Palmisano had helped the council prepare itself for the trial of former police officer Derek Chauvin, accused of Floyd’s killing, in spring 2021. Anticipating a possible backlash to the verdict, the council forged closer partnerships with community organizations. “We developed a much better method of two-way communication, to distribute information but also have those groups reach out to us,” she says. When the jury found Chauvin guilty on all three counts of murder, the fear of new riots defused. Nevertheless, Palmisano says, “We were more ready.”

Palmisano retains strong Notre Dame ties, from her relationships with friends to the photo of the Golden Dome on her phone’s home screen. She still runs in the evenings with a group of mothers from her neighborhood. Charlie, the toddler for whose sake she nearly didn’t run for office, is now 11, and Palmisano and her husband, Matthew Hitchin, now have a second son, Oliver, 5. She wants to model for her sons the public service she believes in so deeply. Sometimes she takes them along to council meetings, she says. “Despite the fact I’m an extremely busy mom, I want them to be able to see I’m invested in our community and doing something right.”

John Rosengren, a resident of Minneapolis’ 13th ward, is a freelance writer whose nine books include the novel A Clean Heart (Mango, 2020).