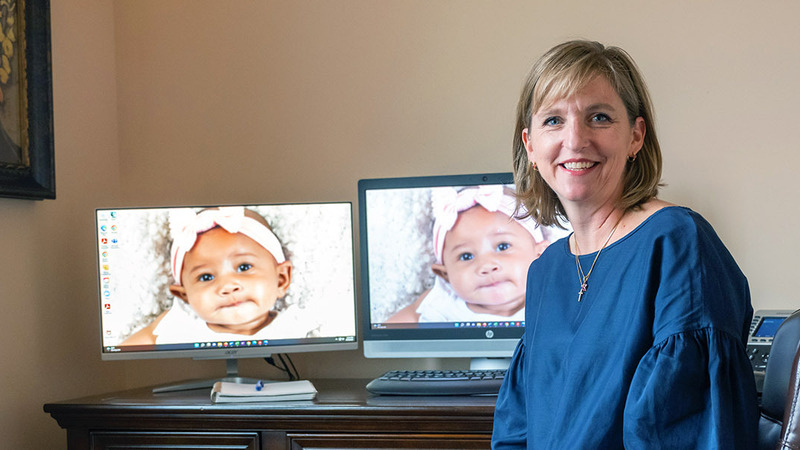 When she was a Notre Dame undergraduate in the early 1990s, Jenny Curran was like everyone else, figuring things out through her life choices. She lived in Pasquerilla East and balanced her architecture classes with a work-study job in the University’s procurement office.

Mostly she loved volunteering — through the Center for Social Concerns — at the Women’s Care Center. She spent hours in the center’s little blue house near the old St. Joseph hospital, east of downtown South Bend, where women facing the biggest decision of all could go to get a free pregnancy test, a free ultrasound, unconditional support, information about all of their options and good counsel about their next steps.

She treasured the spirit of that little blue house. From her first day of training in the fall of 1991, her freshman year, she felt it was a place where an unplanned pregnancy wasn’t a battleground between a woman and a baby. The center celebrated life, starting with the woman’s, by serving and caring for, listening to and loving, each woman who walked through the door.

Curran’s own next step, in the summer after sophomore year, was to pack for the School of Architecture’s yearlong Rome Studies program.

That’s when she discovered she was pregnant.

“So, I grew up in a traditional, big, Irish Catholic family, right? I have nine siblings,” says Jenny Curran Hunsberger ’95, who is now vice president of the Women’s Care Center (WCC) and has never worked anywhere else. Her family was local; her boyfriend’s family was local; the shame and embarrassment the two felt was enormous.

Hard as that was, telling her mother was the easy part. Her father had died when Hunsberger was 11, and she and her mother are very close.

“There was never any question that I would somehow be rejected,” she clarifies while sitting in her office on Notre Dame Avenue, where she oversees client care for the WCC — now serving over 30,000 women annually in 34 centers across 12 states from North Dakota to Florida. “Or, not even rejected. That she wouldn’t love me as much as she always did. That was never a question for me.”

As difficult and life-changing as her junior year turned out to be, Hunsberger knew she had support — exactly what each woman who comes to the WCC most needs as she figures out what this pregnancy means for her. What will change? What might she lose? “It’s not theory,” Hunsberger says of the counseling work. “It’s the nitty-gritty, being in the weeds with someone, and accompanying people through and in difficulty, challenge and struggle. All of it.”

That work has come a long way since philosopher Janet Smith, then a professor in the Program of Liberal Studies, founded the WCC in South Bend in 1984. These days, training for the center’s professional counselors requires a minimum of 160 hours. The reading includes Radical Hospitality, an introduction to the sixth-century Rule of St. Benedict “and this idea that when a stranger comes to your door, you meet that stranger as Christ,” Hunsberger explains.

The center’s strengths-based counseling model reacquaints a woman with her “unique and defining strengths” and resourcefulness. And the accompaniment, a principle grounded in liberation theology and embraced by Pope Francis, endures for as long as a client wants it, from the first visit — usually for a pregnancy test — through a child’s kindergarten enrollment.

The clients represent no particular demographic. They’re our neighbors, Hunsberger says. “They’re just the women in the community.”

“Women come to us, and we meet them,” she says. “We welcome them as they are right now. And you say to someone, ‘You are good, and your goodness is your defining characteristic. It is who you are. And it’s unchangeable, right? You were good before you were born. Nothing can change your goodness — no decisions you’ve made, no situation you live in.’”

‘We don’t empower. We help people recognize and remember their own power.’

While Hunsberger speaks of her work as a vocation and explains the Women’s Care Center mission in terms informed by Catholic moral and social teaching, the approach rules out evangelization, moral judgment and any effort to steer clients toward an outcome.

“‘The decisions you make about this pregnancy, about motherhood, about where you’re going, what your next step is, are yours alone to make — to live in that goodness, to make decisions that are rooted in that goodness. They’re yours,’” the counselors say. “‘Nobody else’s. Not your boyfriend’s or your husband’s or your parents’. And certainly not mine.’”

“What we find is that when women encounter that, when they remember their own goodness — maybe it’s been forgotten, maybe no one’s ever told them — it is in that space that women make decisions for life,” Hunsberger says.

Some women take the pregnancy test and never return. Some start counseling and choose abortion, without losing the unconditional love they encounter at the center.

But over 90 percent of WCC clients choose life, Hunsberger says.

At first, clients meet with their counselors every week. Questions and conversation during the first visit cover how a client is doing, her pregnancy background and medical history, how she feels about the possibility of being pregnant now. Hunsberger notes a subtle but important shift away from a prominent therapeutic concept from decades past. “We don’t empower,” she says. “We help people recognize and remember their own power.”

A woman might continue with weekly visits or opt to touch base only once per trimester. When a baby is born, counseling continues, and the center offers parenting classes — and child care for the mothers and fathers who take them. Clients’ needs range from breastfeeding training to housing to help finding a school. Meanwhile, Hunsberger says, the WCC distributes millions of diapers and thousands of cribs and car seats every year.

One other statistic speaks to the organization’s indelible impact upon communities: “Half of all the babies born in St. Joseph County are born to Women’s Care Center clients,” she says. Same goes for one in nine babies in Indiana.

Hunsberger, who has “always, always, always” loved babies, likes to say she has the world’s shortest resume: that campus job and the Women’s Care Center, which kept drafting her talents for leadership in new ways as the organization grew. She still meets with clients. “It’s a little bit of a joke in the office that when I get to counsel a woman and I walk out, I’m like, ‘This is the most amazing woman I’ve ever met in my whole life,’” she says, laughing at herself. “Like, ‘Jenny, every single person that you’ve met cannot be the “most amazing person” that you’ve ever met.’”

The accompaniment, a principle grounded in liberation theology and embraced by Pope Francis, endures for as long as a client wants it, from the first visit — usually for a pregnancy test — through a child’s kindergarten enrollment.

In no unimportant sense, her work — and its hard lessons — began in childhood. At age 12, she babysat for a boy with severe autism whose parents needed volunteers to try a new approach that involved letting the boy lead and doing everything he did. She was certain her dedication would help him “wake up” to the world. “And of course it didn’t happen,” she says. Instead, she went home sometimes with bite marks on her arm. Looking back, the experience taught her the “slow work” and “power of just being present to another person without the need for success.”

As a student volunteer, she met a client with mental health issues who took several buses en route from her institutional home to visit Hunsberger every day. Knowing the woman’s history, Hunsberger knew she couldn’t be pregnant. “She had multiple personality disorder, and her father had hurt her really in profound ways when she was young.” Yet the woman brought her flowers she’d pulled from a neighbor’s yard. And sometimes, Hunsberger listened as the woman spoke aloud the voices she heard from within her own horror. “That took real trust,” she notes. “She really taught me, ‘What does it mean when you can’t fix?’ There was so little I could do for her, and she wasn’t even pregnant. But what it means to encounter and trust and love, even where it has been so broken and so diminished.”

She first recognized “the raw courage of love” when she began working at the WCC full time during her senior year. In walked a high school student from a prominent local family. Unlike Hunsberger, the girl feared the consequences of telling her parents she was pregnant. Her boyfriend, whom she adored, said he’d leave her if she didn’t get an abortion.

“So she moved to a maternity home,” left school and delivered the baby, Hunsberger says. “She did all of that for this little one. And then she placed him for adoption. She gave up everything for him, and then she gave him up.”

Hunsberger kept in touch with the younger woman, who is married and raising four children. When the woman’s firstborn contacted her, she got to hold him a second time.

Such highs and lows affirm Hunsberger that the Women’s Care Center is where she’s “called to be.”

She chose to keep her baby. She got on that plane to Rome for her junior year, her due date set for eight days after the program ended the following spring. Soon, though, she couldn’t hide her condition. A professor helped her locate prenatal care, but when she returned home for Christmas, she’d left Rome — and architecture — behind her for good.

She spent the spring living with a sister in Virginia and working at a Hallmark store. Her own adoption counselor knew she would keep her baby “months” before she did, she says. She delivered Patrick that May and married his father, Ryan Hunsberger, in December of her senior year. She got used to not being a typical Notre Dame student.

By then she’d switched majors to art history, but it hardly mattered. Jenny Curran Hunsberger already knew what she wanted to do with her life.