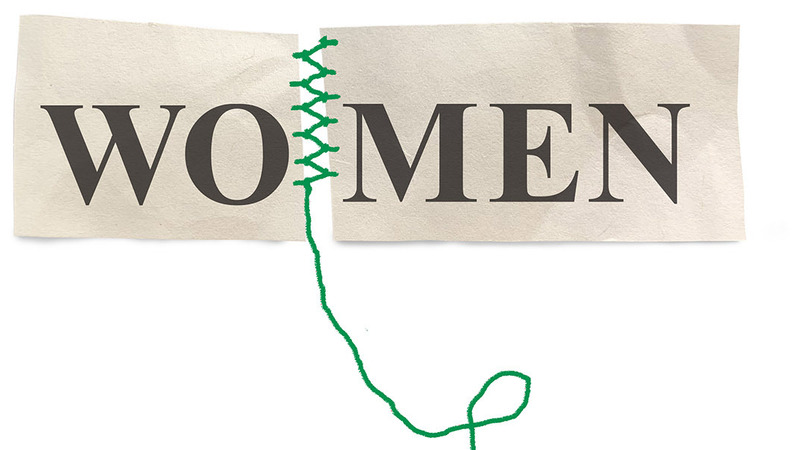 In my Notre Dame scrapbook circa 1984-88, assorted treasures abound — photos of roommates, photos of SYR dances and one yellowing copy of a bill from the director of student accounts. “Undergraduate Fees and Expenses 1983-84” says tuition is $6,450. Room and board for women is $2,105. Men are charged $2,205 for room, board and laundry.

At orientation, I learned that all women’s dorms were equipped with washing machines. Women were not given the option to have our laundry done for us. The men were not given the option of doing their own laundry; they were given the luxury of not doing it — not sorting, washing, drying or folding any of it. They stashed dirty clothes in big bags with their names on them, had them picked up at their residence halls and then carried them home clean, tightly folded and bundled. Notre Dame girls discovered early that, no matter how smart we were, those in charge would expect us to find time for laundry. As I recall, we laughed at how ridiculous it was and learned to accept our reality of being women at a man’s university.

In my required Arts and Letters core course, we read books and wrote papers on such heady topics as “man vs. man,” “man vs. nature” and “man vs. God.” None of the required books focused on the women who grappled with these questions. Women, I began to realize, were left to converse with each other when trying to find their way in a world of powerful men.

The reading list for the class included many groundbreaking works such as Things Fall Apart by Chinua Achebe, a novel addressing the influence of European colonialism and Christian missionaries on a community in West Africa and the devastating effect these forces had on the protagonist, an Igbo clansman. In one class discussion, I commented that the scene depicting the horn-blowing ceremony — the exclusive domain of the male chief of the clan — was eerily similar to the way only male priests consecrate the Eucharist at Mass. My comment was reflexive and obvious, I assumed, yet was met by eye rolls and other signs of contempt from most of my classmates, even some of the women.

My professor, who was a French Jesuit and a chairholder in theology, surprisingly praised my observation and asked me to speak with him after class. The moment initiated a lifelong friendship with an erudite priest who was unafraid of discussions about equality within the Church.

Around that time, after a long day of science classes and cramming for organic chemistry and biology tests on the 13th floor of the ’brare with fellow pre-med students, I walked my tray to the milk station in South Dining Hall. Much to my horror, a group of male students wearing sunglasses and trenchcoats was holding up numbers from one to 10, rating my physical appearance for all to see. Laughs and claps echoed. It was so humiliating that I wanted to crawl beneath a table and die. Occasionally, similarly clad undergraduate men barred access to those women who approached the ice-cream dispenser.

No one stopped this persecution. None of us girls wanted to confront these boys openly and be accused of “not having a sense of humor” or being “too sensitive” or not understanding that it was “just a joke.” It’s not likely the culprits realized the damage their “jokes” were doing, or the staggering number of their female classmates who struggled with eating disorders.

As the first girl on my father’s side to attend college, I was expected to exemplify a good Catholic life for my four younger sisters. I was pro-life and went to Mass more than once a week — or at least that’s how I started out at Notre Dame. One day in the spring of my sophomore year, I recoiled when a female professor remarked, “It’s so nice to have a feminist in my class.”

“I’m not a feminist,” I reflexively protested.

“I’m not sure about that,” I remember saying, then wanting to leave her classroom as fast as I could. I hoped no one, especially none of my male classmates, had heard her comment. I had been brought up in a family where Phyllis Schlafly — certainly not Gloria Steinem or any of her ERA-professing, pro-choice feminist comrades — was to be emulated.

How could my Church and my religion and my college — that I so loved, that was part of my very being — be pushing me to accept and internalize my ‘lesser-ness’?

“Feminist” is a powerful word. It evokes all sorts of emotions and is a polarizing label even among Notre Dame alumnae. It suggests a range of stereotypes, criticisms and divisions. And yet the Oxford Advanced American Dictionary defines feminist as “a person who supports the belief that women should have the same rights and opportunities as men.”

In 1987, my junior year, I wrote a three-page persuasive essay for a journalism course detailing my first experience of sexual discrimination — in the sixth grade at Holy Trinity Catholic School. I described how a few of my female classmates and I had the honor of being chosen by our pastor to be altar servers. We went through the same training as the boys; we were well regarded by the priests and parishioners as we served at daily and weekly Masses, funerals and the like. Then came the bishop to officiate at a confirmation Mass.

The bishop refused to allow girls to serve at that Mass or at any future Mass, because being an altar boy was the first step toward becoming a priest, and women would never become priests. Some of the boy servers quit to support us; adults apologized to us. Despite letters of protest, our bishop had spoken.

In my Notre Dame essay, I didn’t end with the anecdote from the sixth grade. I went on to argue that the time had come when “roles of church leadership should be opened to women.” I wrote: “Women should be included in decision-making processes which dictate new moral and ethical standards and canons,” and, “Current religious texts and missals need to be examined and updated to include more Catholic (i.e. universal) language that includes all of God’s people, not just the men.”

My professor read my paper aloud, and I was beyond embarrassed. I dreaded the backlash. None came. Instead, the class discussed how many of our female relatives and the nuns who taught us were similarly frustrated with the institutional Church’s treatment of women. We discussed the failure of certain Vatican II reforms to take hold. My like-minded, forward-thinking male professor encouraged the long view. Thankfully, today, female altar servers are de rigueur in most parishes, but too little else has changed in the Church at large.

Reluctantly, as I became more educated, I saw how my beloved Church had been a party to my subordination, that I was part of a larger culture of entrenched male dominance. How could my Church and my religion and my college — that I so loved, that was part of my very being — be pushing me to accept and internalize my “lesser-ness”?

After considerable internal debate and discernment, I chose to educate my kids Catholic and become a member of a vibrant Catholic parish that prioritizes “radical inclusivity.” I don’t go to pro-life rallies anymore; they are too polarizing and focus exclusively on outlawing abortion in all instances. Other pro-life matters — war, the death penalty, environmental degradation — get little support. Similarly, I find so-called “women’s marches” polarizing because the organizers don’t welcome pro-life women or allow conservative women to speak from their microphones.

Of my four children, all raised Catholic, none have put Notre Dame atop a college wish list. My older son and daughter are now in college. My twins are sophomores in high school. They were baptized by the University’s president emeritus, Rev. Edward “Monk” Malloy, CSC, ’63, ’67M.A., ’69M.A., and are on the verge of the college application process. As much I would love the myriad magical connections that their attendance would provide, I never pushed my kids to attend my alma mater, mostly because of the way women like me were treated when I was there . . . and because the institution does not seem to prioritize us much, still.

Let me assure you that one of my proudest accomplishments is my Notre Dame degree. My closest Notre Dame gal pals remain among my best gal pals today. I have also maintained friendships with professors and priests since I graduated. I wear ND regalia wherever I go, eliciting eye rolls from family members and non-Notre Dame friends. I am part of the ND Women Connect network and go to at least one football game a year — and I never miss a televised one. I donate every year and recently joined the Sorin Society, a decision I was hesitant to make because I wanted to give to a society dedicated to the advancement of women-centered causes. There aren’t any. As the University marks 50 years of coeducation, it’s time to establish a giving society named for a prominent Notre Dame woman, set up for the purpose of advancing women’s issues at Notre Dame and beyond.

Despite many positive strides regarding women at Notre Dame, a reluctance, if not intolerance, persists toward discussions of feminism. While I was a student, I was not brave enough to call out patriarchal attitudes. The topic of equality between men and women is complicated. It matters that Notre Dame — Our Lady’s university — becomes proudly feminist, in the truest sense of the word, so that when future generations of women consider whether to study or work at the school, a culture of male dominance won’t deter them, because it won’t exist anymore.

Maggie Green Cambria is a mother of four who spends her time between Arlington Heights, Illinois, and Lake Geneva, Wisconsin. She is co-editor of Running the Reds, The First 100 Years of the Water Safety Patrol.